To transform, India needs to improve competitiveness of its states 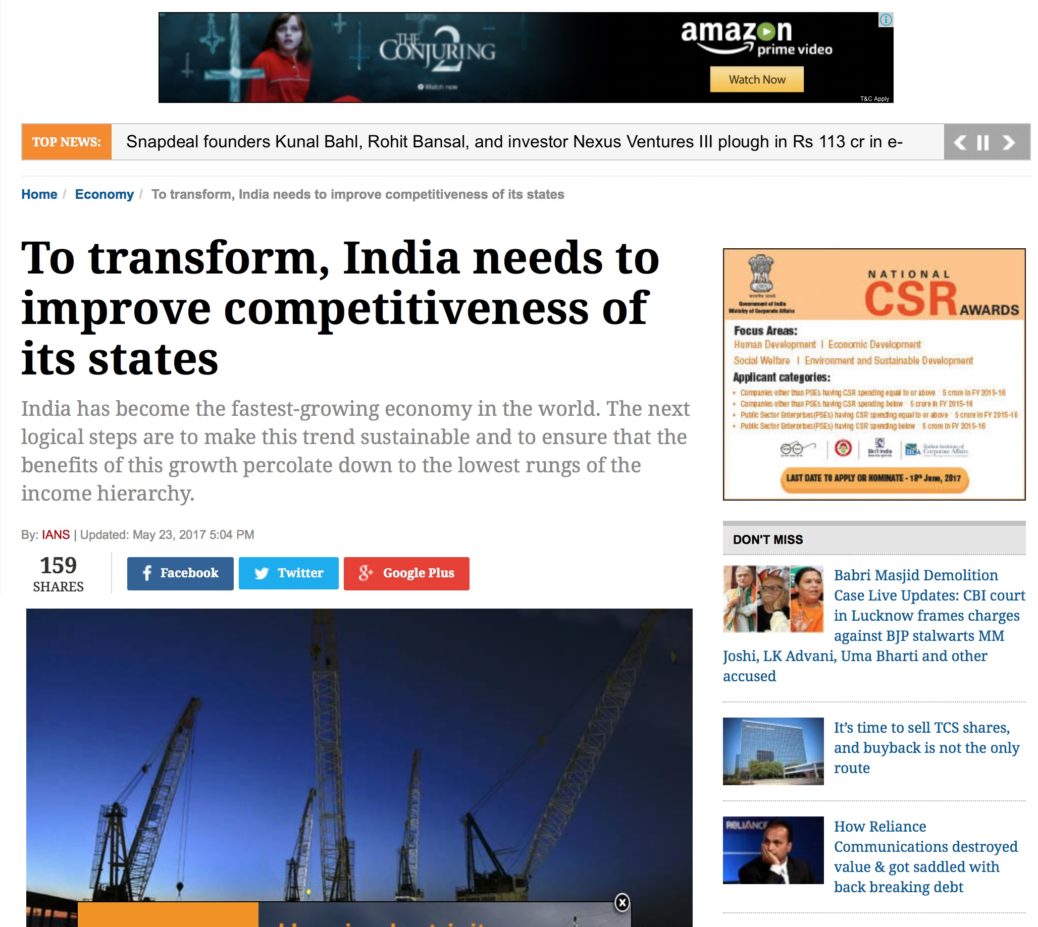 India has become the fastest-growing economy in the world. The next logical steps are to make this trend sustainable and to ensure that the benefits of this growth percolate down to the lowest rungs of the income hierarchy. The success of these two goals will highly depend on the improvement in the country’s national competitiveness. This is because to maintain high growth in the global arena, India needs to retain its competitive advantage in the industries it excels in and to ensure universal prosperity it needs to enhance competitiveness of its factors of production, especially labour.

Considering the importance that the idea of competitiveness holds for India’s future, there is a need to understand what drives it. Is competitiveness a macroeconomic phenomenon that is dependent on variables such as interest rates, exchange rates and government deficits? Or is it a function of cheap and abundant labour and natural resources? Can it be said to be dependent on the quality of a country’s institutions or government policy?

Empirical evidence seems to offer no clear answers to these questions. For instance, Japan and South Korea have witnessed rising living standards with widening budget deficits; Germany and Sweden have prospered despite high wages and labour shortages; and Italy experienced a boom even though government policy in the country was highly ineffective. Such global experiences fly in the face of traditional approach in policy making towards boosting national competitiveness that give undue importance to factors like interest rates and labour costs. India needs a focussed approach towards a singular goal that boosts its competitiveness to the fullest potential.

Achieving higher productivity needs to be the singular goal that India pursues as a nation. The importance of productivity growth is aptly summarised in noted economist Paul Krugman’s words: “Productivity isn’t everything, but in the long run it is almost everything”. Porter concurs with Krugman’s views when he suggests that policy focus on interest rates, labour costs, exchange rates and economies of scale has only short-term appeal and will never lead to any competitive advantage for nations.

The recent ongoing distress pangs in the Indian IT sector vindicate Porter’s claims. The sector was highly dependent on providing low-cost talent to foreign firms. With higher automation and anti-immigration policies abroad, India has begun to lose the short-lived competitive advantage it had in the sector. Cost arbitrage can never be a long-term industry growth strategy. On the other hand, productivity growth requires continual industrial upgradation. To improve productivity, companies must raise product quality, improve product technology, or boost production efficiency. All of these factors require consistent innovation, which has been lacking in Indian IT companies.

Views are also divided in the role of the government to boost competitiveness of nations. Many believe that the government has an essential role to play in framing policies that directly support industries and boost their competitive performance. Others support a laissez-faire approach where the invisible hands guides market operations.

However, both views have their own flaws. The former runs the risk of creating high dependency on government support for subsidies and incentives that hurts the industry in the long-run. The latter view ignores the crucial role that the government plays in providing vital institutional support to companies that can nudge them towards becoming more competitive.

The Modi government in the last three years has attempted to undertake policy initiatives along similar lines. The consistent efforts to improve the ease-of-doing-business across the country is a case in point. The parameters of doing-business include regulatory and infrastructural indicators that create a conducive environment for business activities and reduce bureaucratic interference.

Moving forward, the government needs to consolidate on the gains it has made until now on improving competitiveness and act upon areas, on which it has missed out. The problem of NPAs, thus, needs to be the first item on the agenda, which seems to be the case considering the free hand RBI was recently given to resolve the issue. The issue of bad loans has severely impacted lending operations to businesses, thus impacting the overall competitiveness of the economy.

Such a body can understand the nuances of the state and be a facilitator in nudging industries towards achieving competitive advantage in areas where the state’s strengths lie. Also, it often takes decades for industries to achieve competitive advantage. Since, political cycles tend to be much shorter, governments end up pandering to short-term gains by offering subsidies and protection to industries that end up harming them. An independent body that would last beyond a short span of five years can bypass these political drawbacks.

Competitive regions will beget a competitive economy. The more competitive the economy, the longer it can sustain its booming growth and bring about universal prosperity.

The article was published with Business Standard and Financial Express on May 23, 2017.