Created prosperity as the real goal of development 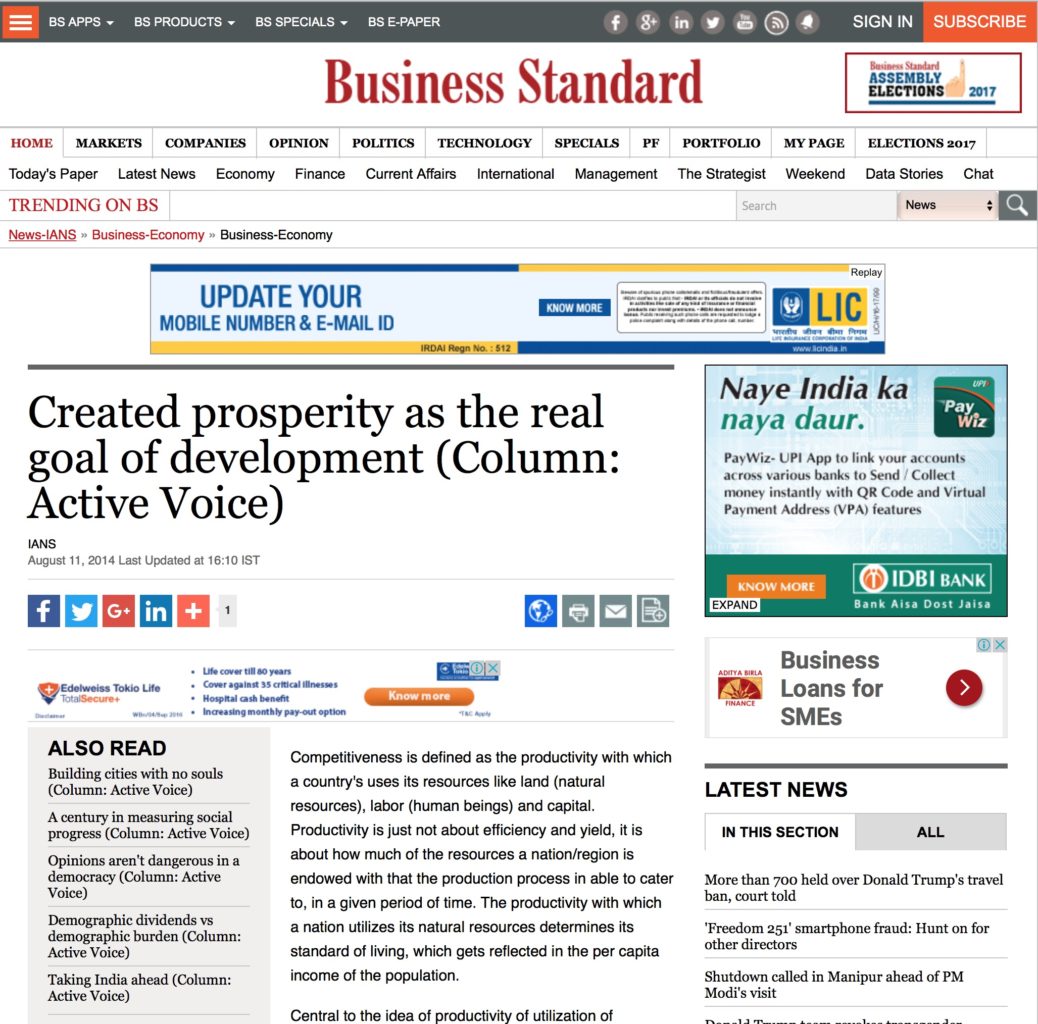 Competitiveness is defined as the productivity with which a country’s uses its resources like land (natural resources), labor (human beings) and capital. Productivity is just not about efficiency and yield,  it is about  how much of the resources a nation/ region is endowed with that the production process in able to cater to, in a given period of time. The productivity with which a nation utilizes its natural resources determines its standard of living, which gets reflected in the per capita income of the population.

Central to the idea of productivity of utilization of resources is the concept of firms / companies, which form the bedrock of prosperity for people. Firms may have different shareholding patterns, but ultimately their organizational ability to create value for a society is immense.

Also, productivity is not just defined by which industries a country competes in, but by how these companies choose to compete within those specific industries. A nation’s productivity is a reflection of the choices made by its companies with respect to the sectors they want to operate in, the value-addition that they do in these sectors and the efficiency with which they produce, etc.

To understand these concepts in practice let us take the example of the two industries namely the Pharmaceutical and IT Industry in India and compare it to a different context i.e., US. An average software engineer or a pharmaceutical executive in US is at least ten times more productive than their counterparts in India. It shows what people are expected to do and what they actually do in companies varies enormously across countries.  In US, the value-addition done by the industry is immense, the engineers focus on innovation that help in extracting better value. On the other hand, most engineers in the Indian context are engaged in support functions that give them limited scope for value-addition, and their work in itself is very monotonous and simplistic. Also with respect to the pharmaceutical industry, we rarely tend to focus on having patents and doing R&D for future competitiveness. Companies tend to look at the short term and tend to focus on contract manufacturing for their European or US counterparts. This happens not because potential of our engineers / executives is limited but because our companies are focusing on the low end of the value creation process.

In India, where the wages are low, the companies typically focus on cost competitiveness by hiring cheap labor and make them do mundane jobs. Very few companies are bold enough to take up the challenge and work towards path breaking innovations. This is true across industries. In the case of IT we do outsourcing work while in the case of the pharmaceutical industry we focus on contract manufacturing and generic sales. Rarely can we find examples of truly innovative enterprises.

This is in contrast to companies like Microsoft, Apple, Google, Facebook, Tesla Motors etc. which have  all emerged outside India, and that too in a country that does not really boast of indigenous talent that is readily and freely available in India. The challenge before India is really in finding winners in industries where value-addition is high and gets reflected in higher labor productivity. For this the institutions of education as well as the companies will have to alter their thinking for creation of societal value.

India’s future in a large measure will depend on how the government frees’ up the sectors in order to release the gales of creative destruction within various industries. The companies in turn will have to embrace competition going ahead. Innovation should form the basis of long-term prosperity rather than government monopolization and control. If these choices are made by the government and companies, a large number of India’s young population will take their destinies’ in their own hands. That truly should be the real goal of development. Not to develop people just materially, but also in empowering them and providing them the means to live a more meaningful and fulfilling life.

Published with Business Standard on August 11, 2014.