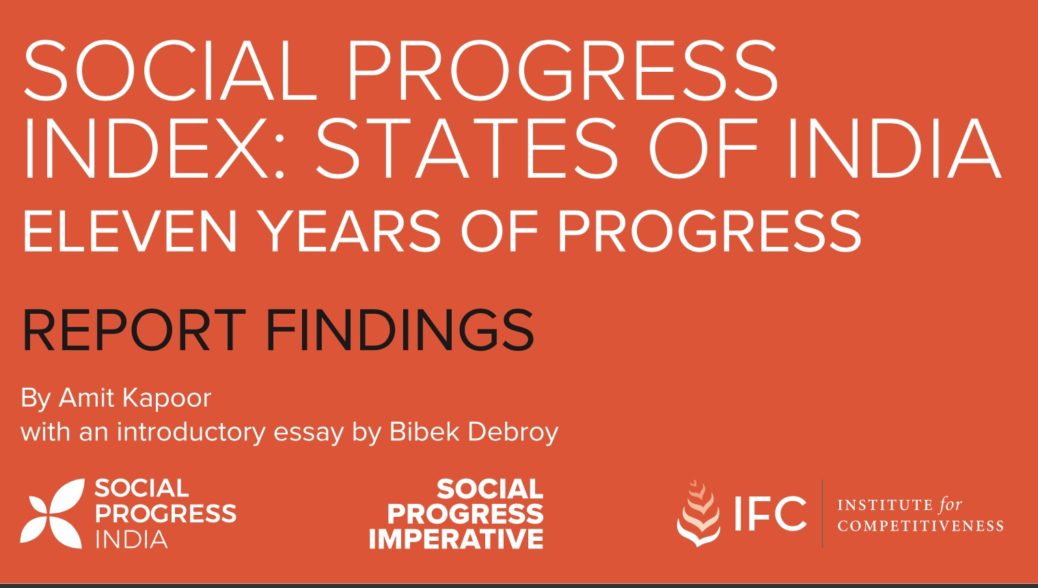 In 2014 Institute for Competitiveness, India joined hands with Social Progress Imperative to lay the foundation for their initiative Social Progress India. The objective was to provide the leaders, businesses, and changemakers in the country with an actionable tool to advance social progress for India’s citizens. It was conceived on the understanding that despite the economic progress that India has made during the last few years, quality of life of its citizens registered only slight enhancements (based on Global Social Progress scores). There are many who live without the provision of essential public services like health, education; almost 30 percent of the rural population have no access to electricity (World Bank, 2014); still, 35 percent of judicial trials take more than three years to complete, and in some cases, they get dragged to more than ten years (NCRB: Crime in India, 2015). These facts indicated the pressing need for a measurement model that can equip change-makers to make social progress more integral to the national performance, which the Social Progress Index provided.

A multi-stage iterative process was followed to reach the most accurate framework of Social Progress Index for the states of India.

The second stage involved identifying a possible set of indicators that met the Social Progress Index criteria. Numerous publicly available indicators that re ect the real lived experience of people were considered.

The third step involved engagement with key experts and stakeholders to solicit feedback and validation. Among those who provided valuable feedback was the team of experts at NITI Aayog whose contribution was invaluable for the Index creation.

The team conducted four presentations of their work at NITI Aayog under the chairmanship of Bibek Debroy and Amitabh Kant. The first interaction involved presenting the broad concept of the Social Progress Index for Indian states, cities and districts and how it can help the government track policy impact, assess Sustainable Development Goals, and set priority areas for investment and development. The feedback helped to improve the framework and led to the creation of the preliminary version of the Social Progress Index for Indian states. The second interaction added the longitudinal aspect to the study. It was realized that it would be more illuminating to measure social progress over time, as such a study will help to analyse whether the developments of states on social indicators are heading in the right direction or not. The third interaction with the experts in women development, health and education sectors, led to the restructuring of the Index after which the Institute for Competitiveness, India developed the nal index for Indian states.

In many respects, the present Social Progress Index (SPI) is di erent. It is much more comprehensive than most inter-State studies. It links progress to the SDGs (sustainable development goals). Conceptually, it has the important distinction of dividing the variables into three heads of basic human needs, foundations of well-being and opportunity.

Institute for Competitiveness, India along with Professor Michael E Porter and Michael Green launched the discussion paper for the Social Progress Index: States of India during the India’s National Competitiveness Forum 2017 with the purpose to invite feedback and comments from national leaders as well as the public. Declaring about this Professor Porter said, “India is set to create a social progress index (SPI) that will mirror the track record of individual states on various counts which is likely to emerge as a tool for accountability in governance and politics.”

The final interaction with NITI Aayog, after addressing the concerns raised in the consultation period revolved around how to ensure the results are used to make real improvements in people’s lives.

The Institute is thankful to everyone who has contributed to this effort. We could never hope to name all those who have helped us, but we would like to highlight the following individuals for their contributions. Thanks to Bibek Debroy whose knowledge and expertise has guided us in our journey, Amitabh Kant for his guidance and suggestions about national priorities and Yogesh Suri without whose tireless e orts this report would not have seen the light of day.

The Social Progress Index supplements measures of economic success by directly measuring social and environmental outcomes. The Index is a tool that provides actionable data about the strength and weaknesses of each community, improving the capacity of governments and businesses to respond to people’s needs and ensure economic growth is accompanied by societal improvement.

We are thankful to Bibek Debroy, David Cruickshank, Scott Stern, Michael Green and Nitya Khemka for providing their valuable contributions to the report.

Many thanks to the team at Social Progress Imperative for their strategic inputs to develop engagement strategy; their insights and technical inputs on indicators.