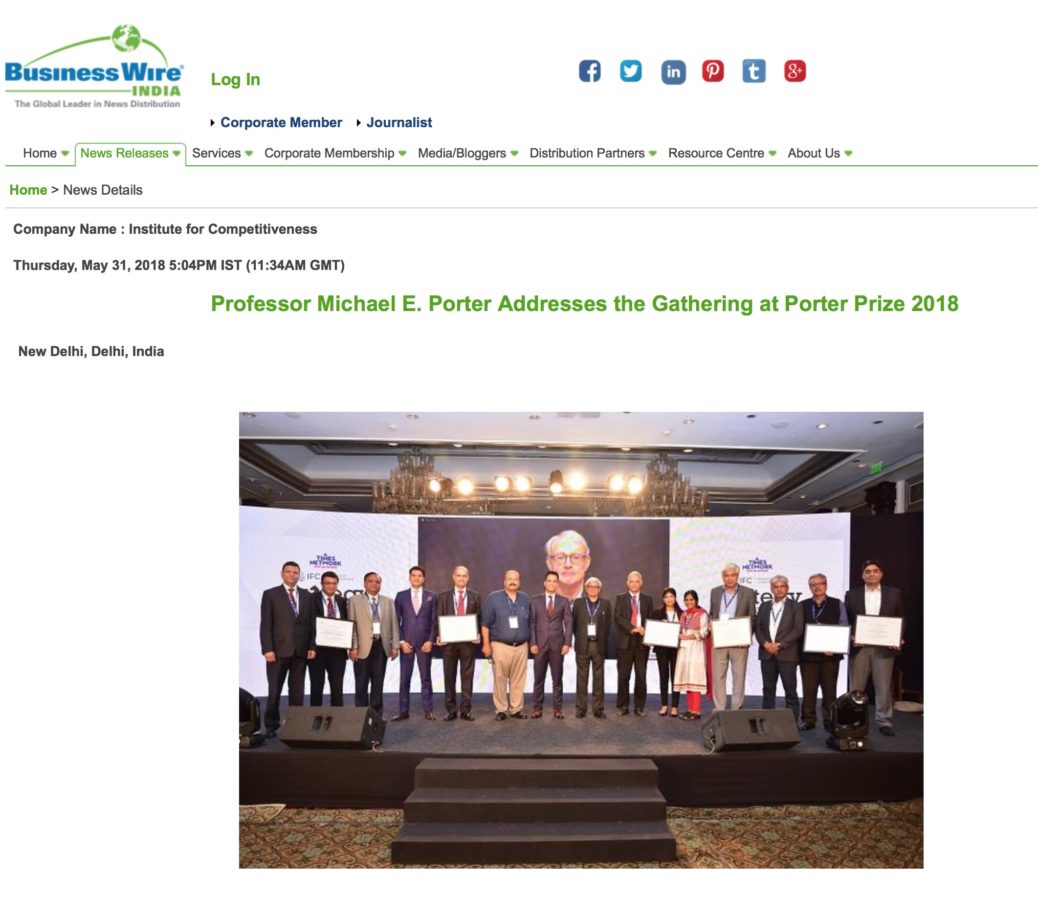 Harvard Business School Professor and leading management thinker, Michael E. Porter addressed a gathering of top industry leaders, thinkers and government functionaries at Porter Prize 2018 held on May 30, 2018 at The Taj Mahal Palace, Mumbai. Porter Prize is awarded to winning companies for their strategic acumen. The award is adjudged after a rigorous process of evaluation, interaction and jury assessment. Participants are thoroughly analysed on vital parameters of strategy like trade-offs, creating distinctive value, fit, et al. that drive the competitive advantage of firms.

Professor Porter delved into the question of why every organisation needs an augmented reality strategy based on his recent work on information technology. He highlighted the fact that a sense of anxiety is gradually taking over businesses and people due to the advent of information technology and its impact on jobs. Technologies like augmented reality (AR) are venturing into new information delivery paradigms that are redefining businesses. To be precise, AR creates business value in two ways: first, by differentiation of products and second, by improving productivity along the value chain. AR has, therefore, become an important aspect to create competitive advantage for modern businesses. The only challenge is not the lack of data or knowledge but in assimilating and acting upon them so that new productivity horizons are unleashed.

Porter, then, presented the Porter Prize 2018. The award was presented to the following recipients:

The event was also marked by a keynote from Bibek Debroy on the role of government in modern economies and how India and its government have fared through history. He distinguished between the malign and the benign role of government. The former refers to an excess government intervention in areas which should be left alone by it while the latter refers to the goods and services that it is expected to deliver. But, the malign role of the government should be constrained only subject to appropriate regulations. An absence of regulation is impossible since the real world is vastly different from the perfect conditionalities assumed by theory. In that respect, he also defended the GST regulation of the government in its imperfect form. He asked the audience if debate and discussion on GST should have been undertaken in perpetuity to generate consensus or was it preferable to implement an imperfect tax law and to address its challenges along the way.

Post his address, Bibek Debroy also launched the “2018 Social Progress Index: Districts of India” that the Institute for Competitiveness undertook in collaboration with Social Progress Imperative. The study covers 637 districts from 33 states and Union Territories. It is the first ever effort to holistically and comprehensively assess the quality of life of India’s citizens on this level of granularity. During the launch of the report, he commented that, “When we look at India we often tend to look at it in terms of whats happening in states, we tend to look at it in terms of whats happening in districts, because these are need administraive boundaries. The interesting churn that is happening in India now is not just competition among states but the great disparity among states and within states. Several of the states that historically were backward, according to whatever criteria you choose are now fast catching up. The distance between them and the more advanced states historically may still be large but that is because states like Punjab, Goa started with high base levels. Even more interesting is the fact that there are increasing variations within states. What is exciting is this churn and to understand what is happening to development and deprivation in India it is no longer enough to look at states. It is more important to look at districts.”

For more details of the event visit https://competitiveness.in/event/porterprize-2018/

About Institute for Competitiveness: