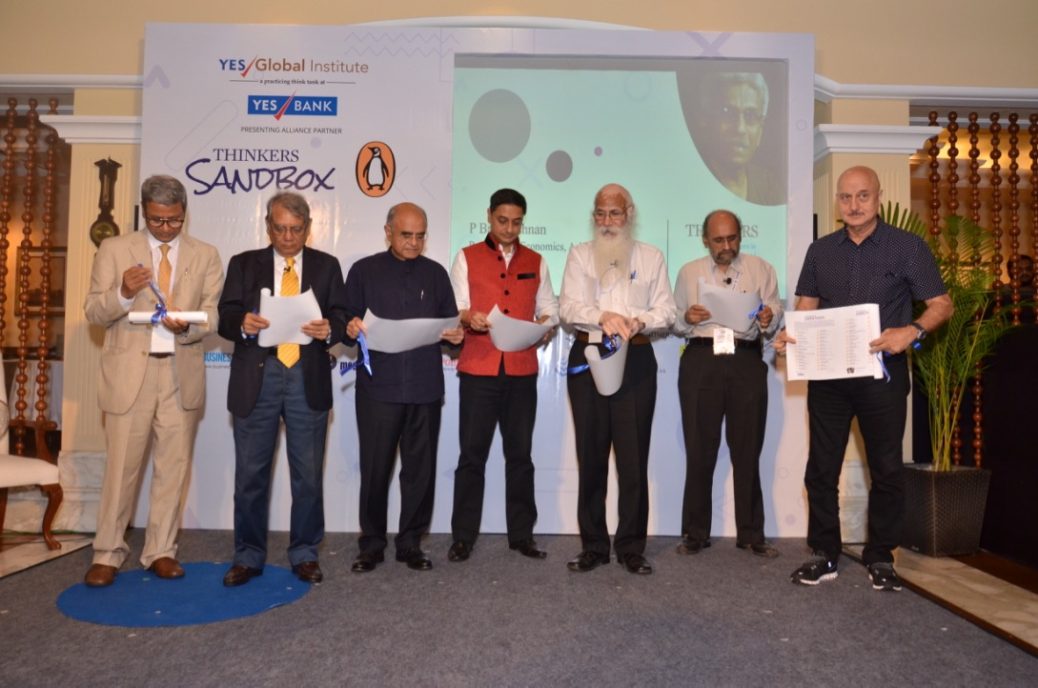 THINKERS Sandbox, an event held by THINKERS & Penguin Random House with YES BANK and the YES Global Institute as the Presenting Alliance Partner, announced a list of top 50 thinkers in India in the field of economics and governance. The list was unveiled by Anupam Kher at the event. It included a distinguished set of reformers, influencers, financial architects and academics who have made a difference by driving the national narrative with their unique ideas or steering the nation itself with their firm decision making. The list featured economists like Jean Dreze, Prabhat Patnaik and Paranjoy Guha Thakurta; columnists like Gurcharan Das, Swaminathan Aiyer and T. Ninan; central bankers like Bimal Jalan, C. Rangarajan and Y.V. Reddy; and reformers like Montek Singh Ahluwalia, Rakesh Mohan and Viral Acharya.

The list was formulated after careful deliberation on how these thinkers enable discourse in society and what is their level of public outreach. These characteristics were adjudged based on their book publications, newspaper contributions, social media engagement and influence in public policy with a preference for ones based out of India. There will be an annual publication of such a list of thinkers in India. It aims to act as an essential guide onthe thinkers and the ideas that have contemporary relevance in modern India and its development and recognise the independent minds of the country that have made it a better place and shaped a better future for it. To view the complete list and for more detailed information click here.

Dr. Amit Kapoor, Editor-in-Chief, Thinkers said, “India is fortunate to have a ubiquity of talented minds in every field of the society that have made incomparable contributions in shaping India as we know it today. THINKERS is all about recognising such individuals and their ideas. The THINKERS list of 50 thought leaders does exactly that and also acts as a guide for the nation as to which set of thinkers and ideas they need to follow to become more informed citizens.”

Dr. Shubhada Rao, Chief Economist, YES BANK, said, “YES BANK and YES Global Institute are proud to be associated with the launch of the Thinkers list. At a time when our country is poised to benefit from path breaking economic reforms, forums such as these will help foster economic and governance ideals towards India’s sustainable and holistic socioeconomic transformation.”

The list was released at the THINKERS Sandbox event, which was held at The Imperial, New Delhi on August 9, 2017, and featured a subset of the list’s 50 thought leaders. THINKERS Sandbox is a platform to discuss new ideas, new thoughts, address challenging issues, forge new paths and identify synergies. This year the event focused on the topic of “Economics & Governance” and featured insightful talks and panel discussions around various paradigms of the Indian economy.

The event also witnessed the unveiling of Bimal Jalan’s latest book “India: Priorities for the Future” in which he has penned down a formidable analysis of India’s economic journey in the last four decades and Gurcharan Das’ “10 Extraordinary Tales of Trade” that takes an in-depth view of business communities in India.

Speaking about the event, Milee Ashwarya, Editor-in-Chief, Penguin Random House India, said that “I’m delighted that we have a range of minds presenting diverse ideas on one platform THINKERS Sandbox today. It was an honour to have the business series Tales of Trade edited by Gurcharan Das to be released with Anupam Kher and the best minds in economy and governance in the country. We are a nation that has always encouraged debates, discussions and divergent views and THINKERS is an attempt to find space to encourage this unique quality about India.”

Thinkers is a quarterly thought leadership magazine with articles, interviews, and thought pieces from the brightest thinkers in the areas of economics and governance; philosophy and literature; science and technology; and management. It is an initiative of Institute for Competitiveness & Thinkers50 India.

Dr. Amit Kapoor is the Editor-in-Chief Thinkers and is also an advisor to Thinkers50. He is also the Chair of Institute for Competitiveness and is President & CEO of India Council on Competitiveness. Recently, he has authored the book Riding the Tiger published by Penguin India.