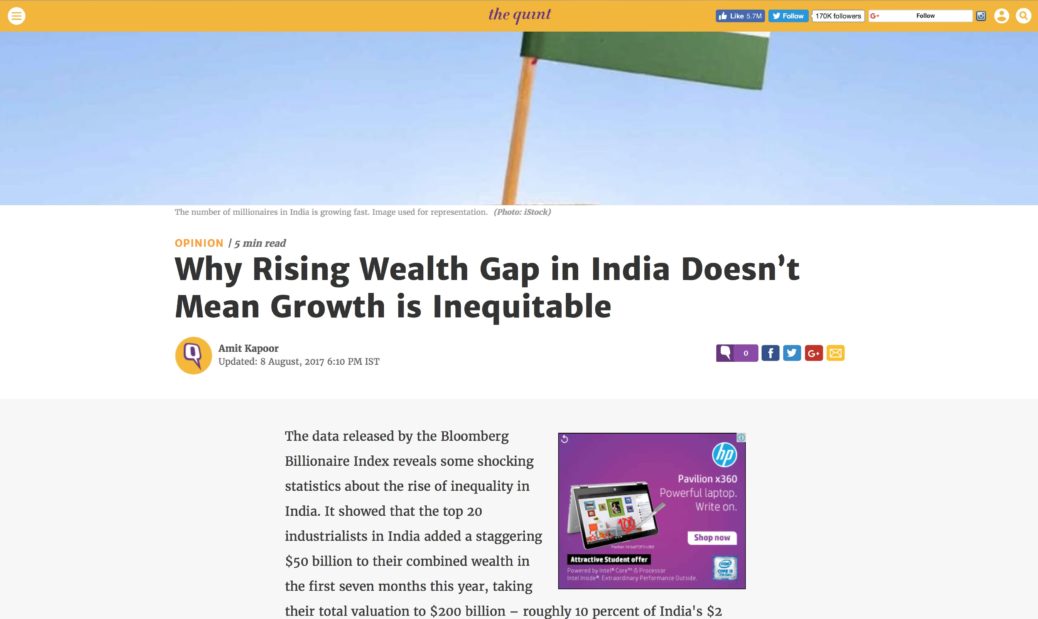 The data released by the Bloomberg Billionaire Index revealed some shocking statistics about the rise of inequality in India. It showed that the top 20 industrialists in India added a staggering $50 billion to their combined wealth in the first seven months this year taking their total valuation to $200 billion, which is roughly 10 percent of India’s $2 trillion economy. Similarly, an Oxfam report released this year revealed that 57 billionaires in India own as much as the bottom 70 percent of the Indian population and, more broadly, the richest 1 percent of the Indian population holds 58 percent of the country’s total wealth – higher than the global average of 50 percent. Therefore, inequality is no longer a first-world phenomenon. It is very much at our shores, but the moot question remains if the trend is undesirable at all.

The general contention is that inequality is inimical to societal development and should be minimised to the fullest extent possible, preferably through redistributive means. However, there is a strong case to make that with rapid growth, rising relative inequalities, more often than not, leads to advancing distributional equity in society. This argument can be rationalised on the basis of insights put forward by Kuznets, Scitovsky and Hirschman.

Kuznets argued that when economic growth takes place, at the disaggregated micro-level, individual economic agents move along the real income scale – a process which he termed as “income mobility”. Now, income mobility can either be upward or downward but it is observed that during phases of rapid economic growth, opportunities for upward mobility far outweigh those for unchanged or downward mobility. Also, in the presence of income mobility, the identity of individuals at different levels of the income scale changes rapidly over time. In such a scenario, average inequality indicators cannot reflect the true picture on the ground and can, therefore prove to be misleading predictors of the adverse social outcomes of growing inequality. The tolerance level of inequality for the society in times of rapid economic growth may be much higher than what is reflected in inequality statistics as it fails to take income mobility into account.

Another problem with only looking at inequality statistics is the perception of a simplistic one-to-one correspondence between movements in income inequality and equity. Scitovsky views offer an interesting take on the matter. He suggested three criteria for social acceptability of rising inequality: those inequalities arising out of people’s merit and contribution to society; those arising in an environment of equality of opportunities; and those that lead to improvement in well-being of individuals at the bottom of the latter. In all of these three cases, rising inequality cannot be equated to a one-on-one fall in equity. Therefore, more focus should be kept on the wealth accruing to the people at the bottom of the ladder to understand the real implications of rising inequality. Scitovsky proposed that an egalitarian society should be defined as one where there is equal or near-equal distribution of the necessities of life.

Finally, as Hirschman points out, inequality data fails to take into account the public perception of rising inequality. He pointed out that in a stagnant economy leads to a zero-sum game where economic advancement of others provokes a negative signalling effect of a possible deterioration of one’s own economic position. However, in times of rapid economic growth, there arises a positive-sum game where economic improvement of others signals an environment where there is hope for a rise in one’s own prosperity in the future. Such an exceptional calculus begets gratification which overcomes envy and discontent. This scenario would make society’s tolerance for rising disparities quite substantial. Such an eventuality can be sustained in a society as long as the economic and social barriers to income mobility are broken down through government policy or rapid growth and prosperity is attributed to hard work and chance. Discord arises in societies where such prosperity arises out of corruption and deception like the one seen in the Occupy Wall Street protests.

Thus, it needs to be understood that contrary to the common perception among individuals and policy makers, rising inequality is not necessarily inequitable, if and when it arises out of rapid economic growth. The startling figures of inequality in India that have been brought about off late, therefore, offer an incomplete picture. Moreover, use of these figures to argue that Indian economic development has had adverse distributional consequences offers the incorrect diagnosis and skews policy making.

The focus on wealth accruing at the top needs to be supplemented with the income mobility achieved by those at the bottom of the pyramid and with a focus on elimination the social and economic barriers that they face in achieving upward mobility. A skewed focus on the top hardly serves any purpose other than providing shock value.

The article was published with The Quint, Economic Times on August 8, 2017.