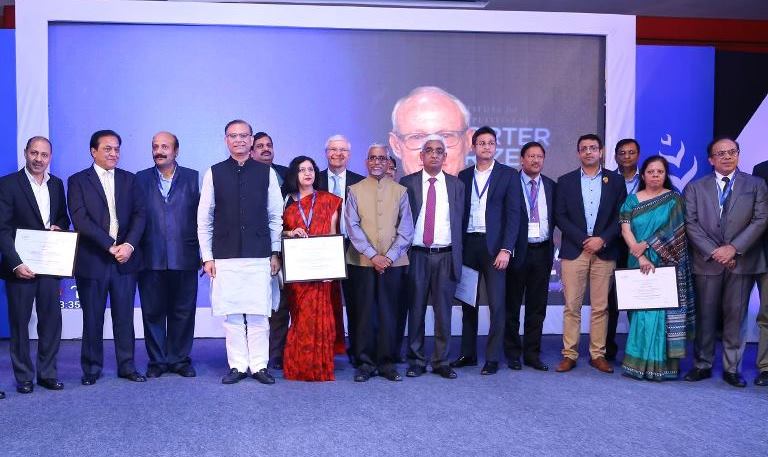 –    Ten enterprises in nine different categories were presented the Porter Prize 2016 on September 30, 2016

Professor Michael E. Porter shared his ideas about the role of competitiveness and clusters for countries and companies and congratulated all the participating companies during his address to the hugely interactive group of best of corporates in India. He shared his thoughts regarding how tremendous opportunity exists in India to make a leap on competitiveness. He further added that India needs to focus on understanding and practicing clusters based approach. It would enable the country to gain competitive advantage at country, state and company levels. The main determinants of competitiveness are microeconomic and macroeconomic factors. The microeconomic factors include quality of business environment, state of cluster development, and sophistication of company operations and strategy.  The macroeconomic factors include monetary/ fiscal policies and human development for effective public institutions.  He discussed changing landscape of India and signs of moving ahead beyond bureaucracy and inefficiency.  He gave the following recommendations. First, India needs to focus on competitiveness and not jobs per se. Second, focus on clusters based development where companies create a synergy effect. Third, India being a complex economy should adopt bottom-up approach rather than top-down for enhancing competitiveness.

Shri Jayant Sinha gave the keynote regarding the role of innovation, competitiveness and productivity in making India globally competitive. He started with highlighting the global challenges like Brexit, climate change, Middle East crisis, USA elections etc., which are creating stress and uncertainties globally.  Amidst all these challenges, India needs to dedicate itself to the creation of a globally competitive economy. He said, “India needs to build entrepreneurial engine and ecosystem which harness the new business models and innovations for the six billion people on this planet.” He talked about identifying the new design points which can deliver value offerings having high performance price ratio.

Dr. Amit Kapoor, Institute for Competitiveness congratulated all the awardees of the evening. On behalf of Indian corporate, he extended a promise to Professor Porter to further evangelize concept and practice of competitiveness to states, cities, and enterprises of India.

Porter Prize 2016 was awarded to the following recipients:

–    Yes Bank was presented Porter Prize for Leveraging Unique Activities. Rana Kapoor received the award on behalf of Yes Bank. The citation reads “For your outstanding performance in the industry and to recognize your effective rendering of activities across the value chain that created competitive advantage. You clearly stated that good strategies depend on the connection among many things and on making interdependent choices.”

Commenting on the achievement, Rana Kapoor said, “India’s new age Entrepreneurial Economy is characterized by Design, Innovation, and Creativity – led Entrepreneurship. I am confident that with the right mix of innovative ideas, access to risk capital and large consumption demand, India is well positioned to emerge as the global hub for entrepreneurship & innovation with the potential to fuel not only national but also global aspirations of the 21st century.

It is a privilege and honor for YES BANK to receive the Porter Prize for Leveraging Unique Activities”; such awards motivate us to raise the bar in our pursuit to consistently deliver on our vision to ‘Build the Finest Quality Bank of the World in India’.”

–    Manipal Global Education Services was presented Porter Prize for Industry Architectural Shift. S. Vaitheeswaran received the award on behalf of Manipal Global. The citation reads “For your outstanding performance in the industry and to recognize you for redefining the industry structure by challenging the very basis of competition, creating new business models, challenging the status quo and exploiting change.”

–    Adani Wilmar was presented Porter Prize for Exploiting Trade-offs. Angshu Mallick received the award on behalf of Adani Wilmar. The citation reads “For your outstanding performance in the industry and to recognize the choices that made your strategy sustainable as they were not easy to match or neutralize due to which you were able to create barriers pertaining to emulation.”

On receiving the recognition, Angshu Mallick said, “We are trying to create, innovate and identify scope and opportunity to create new products.”

–    Times Network was presented Porter Prize for Creating Distinctive Value. M K Anand & Naveen Chandra received the award on behalf of Times Network. The citation reads “For your outstanding performance in the industry and ability to offer unique solutions to the customers. You effectively created new market spaces, segments and provided solutions that redefined the market.”

Mr. Anand said, “We are trying to setup whatever voice we can carry to people in India and the diaspora.”

–    Operation Asha was presented Porter Prize for Value-Based Healthcare which was received by Dr. Shelly Batra. The citation reads “For your outstanding performance in the industry and to recognize for redefining the idea of patient care and fundamentally challenging the economic models within the industry.”

Dr. Shelly Batra commented on the recognition, “We are extremely overwhelmed and delighted. We dedicate this award to all those who believe in caring and sharing as well as to those who believed in us.”

–    Godrej Consumer Products Limited and Abbott India shared the Porter Prize for Creating Shared Value. Sunil Kataria and Bhasker Iyer received the awards on behalf of Godrej and Abbott respectively. The citation reads “For your outstanding performance in the industry and to recognize your high impact as an organization that created economic success by redefining markets, products, a way of doing business, creating collaborative efforts and in turn creating societal and economic progress.”

Commenting on the achievement, Sunil Kataria said “We are proud of 2 things– shared value and innovation. It is heartening to see that what we have done in innovation which has led to shared value impact and award.”

On receiving the award, Bhasker Iyer said, “We at Abbott are extremely proud of Shared Value Initiative. We are convinced that this will benefit all our stakeholders. We are extremely honored.”

–    Intellecap – Aavishkaar Group was presented Porter Prize for Enabling Social Progress. Vineet Rai received the award on behalf of Intellecap. The citation reads “For your outstanding contribution to the society to meet the basic human needs, established blocks that allow communities to sustain the quality of life and creating conditions for individuals to reach their potential.”

Vineet Rai commented on the achievement, “I am humbled and honored and to get this award from Mr. Jayant Sinha thanks to Prof. Porter.”

Anita Arjundas thanked everyone and said, “It is an honor to receive the award particularly on corporate governance, which is held very closely to our heart in Mahindra Group. Ethics and governance hold a lot of importance in this sector.”

–    Mindtree was presented Porter Prize for Smart Connected Products. Rostow Ravanan received the award on behalf of Mindtree. The citation reads “For your role in reshaping industry boundaries & creating entirely new industries; expanding opportunities for new functionality, greater reliability, higher product utilization, and capabilities that cut across and transcend traditional product boundaries; building capabilities within enterprises to rethink and retool nearly everything they do internally.”

To know more about the Porter Prize 2016 winners, visit http://www.porterprize.in/winners-2016/

Porter Prize is named after Michael E. Porter who is Professor at Harvard Business School, living legend and father of modern strategy field. The central idea of the Porter Prize is to propel companies to compete on the basis of value creation, innovation and strategy. For more information, visit http://www.porterprize.in