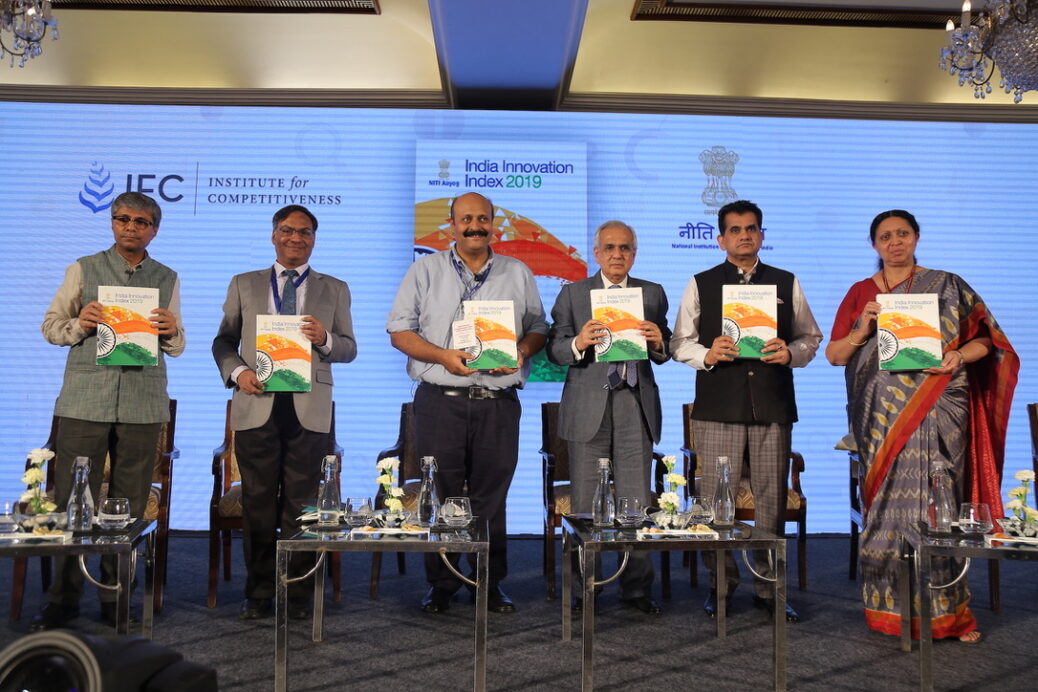 Sub Heading: Karnataka, Tamil Nadu, Maharashtra, and Delhi are among the innovation front-runners in the country.

Recognizing the role of innovation as a key driver of growth and prosperity for India, NITI Aayog with Institute for Competitiveness as the knowledge partner has released the India Innovation Index 2019. The study is an outcome of extensive research and analysis, which looks holistically at the innovation landscape of India by examining the innovation capabilities and performance of Indian states and union territories. The aim is to create a holistic tool which can be used by policymakers across the country to identify the challenges to be addressed and strengths to build on when designing the economic growth policies for their regions.

The index attempts to create an extensive framework for the continual evaluation of the innovation environment of 29 states and seven union territories in India and intends to perform the following three functions- 1) ranking of states and UTs based on their index scores, 2) recognizing opportunities and challenges, and 3) assisting in tailoring governmental policies to foster innovation.

The India Innovation Index 2019 is calculated as the average of the scores of its two dimensions – Enablers and Performance. The Enablers are the factors that underpin innovative capacities, grouped in five pillars: (1) Human Capital, (2) Investment, (3) Knowledge Workers, (4) Business Environment, and (5) Safety and Legal Environment. The Performance dimension captures benefits that a nation derives from the inputs, divided in two pillars: (6) Knowledge Output and (7) Knowledge Diffusion.

The index presents the latest findings and highlights the regional catalysts and caveats for promoting innovation readiness. The Report offers a comprehensive snapshot of the innovation ecosystem of 29 states and seven union territories. It also includes a section on state profiles covering 33 indicators looking at the different facets of innovation in India.

The index shows that the innovation ecosystem of the country is strong in south and western parts of India. In fact, three of the top five major states are from southern India. Delhi and Haryana seem to be an exception to this rule and seem to be doing well on the Index. Thus, there seems to be a west-south and north-east divide across the country.

The states have been bifurcated into three categories: major states, north-east and hill states, and union territories / city states / small states. Karnataka is the leader in the overall rankings in the category of major states. Karnataka’s number one position in the overall ranking is partly attributed to its top rank in the Performance dimension. It is also among the top performers inInfrastructure, Knowledge Workers, Knowledge Output and Business Environment.

Among the category of major states, Maharashtra performs the best in the dimension of Enablers. This implies that it has the best enabling environment for innovation, even though the state comes in at the third position in the overall innovation index.

The broad level learnings and some policy imperatives at the national level include increasing the spending on research and development, improving the capability of top rung educational institutions in the country to produce greater innovation outputs. There is also a need for greater coordination and collaboration between the industry and the educational institutions for enhancing innovation capability. A collaborative platform consisting of all the stakeholders of innovation – innovators, researchers, andinvestors from the industry should be developed. This will help in strengthening the industry-academia linkages and will ease the process of technology transfer by providing a platform for innovators to showcase their inventions.

The index was released in the precense of Dr. Rajiv Kumar, Vice Chairman, NITI Aayog; Amitabh Kant, CEO, NITI Aayog; Ashutosh Sharma, Secretary, Department of Science; Renu Swarup, Secretary, Department of Biotechnology and Vaidya Rajesh Kotecha, Secretary, AYUSH. Dr. Kumar expressed hope that “the India Innovation Index would create synergies between different stakeholders in the innovation ecosystem and India would shift to competitive good governance.” Shri Amitabh Kantadded that “India has a unique opportunity among its myriad challenges to become the innovation leader in the world.” Renu Swarup said, “cluster-based innovation should be leveraged upon as the focal point of competitiveness.” Shri Ashutosh Sharma added, “The index is a great beginning to improve the environment of innovation in the country as it focusses on both the input and output components of the idea.” Shri Vaidya Kotecha said, “The index is a good effort to benchmark the performance of the state with each other and promote competitive federalism.”

We expect that the Report will come to be recognized as a benchmarking instrument and an invaluable tool for facilitating public-private dialogue, whereby policymakers, business leaders, and other stakeholders can evaluate progress on a continual basis.

The National Institution for Transforming India, also called NITI Aayog, was formed via a resolution of the Union Cabinet on January 1, 2015. NITI Aayog is the premier policy ‘Think Tank’ of the Government of India, providing both directional and policy inputs. While designing strategic and long-term policies and programmes for the Government of India, NITI Aayog also provides relevant technical advice to the Centre and States.