The Alluring Twenties: What Would it Take to Replicate the 1920s? 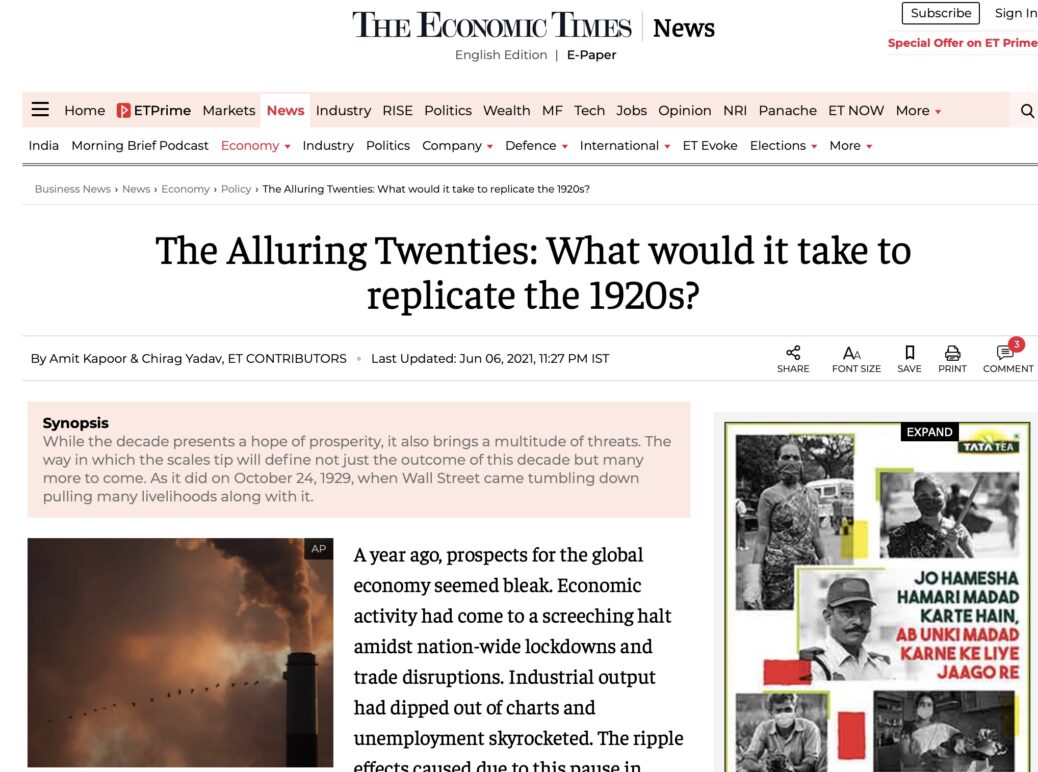 The Alluring Twenties: What Would it Take to Replicate the 1920s?

A year ago, prospects for the global economy seemed bleak. Economic activity had come to a screeching halt amidst nation-wide lockdowns and trade disruptions. Industrial output had dipped out of charts and unemployment skyrocketed. The ripple effects caused due to this pause in economic activity were feared to lead into a long-pending recession. However, in hindsight all doomsday predictions seem too pessimistic. The developed world led by the United States and the developing led by China are reporting a promising recovery. Even India’s growth numbers for the last financial year bettered the government’s own expectations. Now, the economic pessimism from last year has converted into a glowing optimism from this decade with some drawing parallels to the “Roaring Twenties”, which refers to the decade of economic prosperity experienced a century ago following the end of World War I and the Spanish flu. There are several reasons why this might or might not be true.

Before taking a peek at the probable future, it is necessary to understand why the recessionary fears did not pan out as it has a strong bearing on the years ahead. One of the leading factors that helped was the fear of recession itself and the government intervention due to it. Governments around the world – some more than others – pumped money into the economy, put it into the hands of people, and distributed essentials like food. The US, for instance, has pumped more than $5 trillion into the economy, which exceeds spending in any previous recession. As a result, the expected ripple effects did not take place. The lost income from the lockdowns and job losses were partly compensated by state intervention through various channels. There has also been a jump in household savings during this time due to these interventions. In India, for instance, it rose to a 20-year high during the pandemic.

Going forward, these trends show that as soon as the pandemic-induced restrictions ease out, there will be a sudden boost in consumer spending. This is already evident in some sectors. Cruise liners, for instance, are reportedly booked up till 2023. But what after this short-lived pent-up demand has played itself out? Will we move into the “Roaring Twenties” of the 21st century? The answer is that it depends.

What led to the “Roaring Twenties” a century ago in America was a matter of chance. By the 1920s, Edison’s inventions of electricity had been over four decades old. So, it had become sufficiently affordable at 10 cents for mass usage and its supply had been extended to about a third of American homes. This historical happenstance in an economy that had recently transitioned to peacetime ushered in an era of consumerism. Companies delivered the first mass-produced vacuum cleaners, washing machines, electric irons, and – most notably – automobiles. These products had been around for years, but the availability of cheap electricity sparked their simultaneous commercial success. Therefore, replicating the century-old decade of prosperity will require a similar technological revolution of sorts.

We already have a counterpart for Henry Ford in this century in Elon Musk’s electrical cars. But that would clearly not be enough. The techno-optimists have their hopes riding on artificial intelligence (AI), which has had a similar gestation period as most general-purpose technologies undergo. Erik Brynjolfsson and Daniel Rock, of MIT, and Chad Syverson, of the University of Chicago refer to this pattern of technological evolution in their recent work as the “productivity J-curve”. According to them, firms are slow in adopting new technologies as they require significant complementary investment. Such investments also cause a temporary dip in productivity in the initial years. Even computers faced a similar problem causing the Nobel laureate, Robert Solow, to remark in 1987 that computers are visible everywhere except in the productivity numbers. AI has witnessed about four decades of development as well since the first breakthroughs made by Geoffrey Hinton and Judea Pearl. It remains to be seen whether AI would be the driving technological force this decade, but it definitely cannot be written off.

However, in all the technobabble surrounding this decade, there are real risks that can derail all expectations of prosperity. The most significant threat is that of climate change. Extreme weather records are consistently being broken around the world. This decade will be the tipping point. A lack of action can cause widespread devastation and uproot livelihoods at a scale that can dampen any prospect of prosperity.

Then, there are demographic risks. A notable difference in America of today compared to the America of a century ago is its demography. The median age in the US in 1920 was 25 compared to close to 40 today. This is true for the rest of the developed world. An aged population implies higher dependency and less working hands. Developing countries like India, however, have an edge on this front.

Further, there are underlying economic risks that can overshadow the economic story of the decade. Inflation fears are emerging from developed economies after an elongated period of low inflation and interest rates. While some inflation should be seen as a good sign, a sustained upward trend can force central banks to raise interest rates, which will lead to money being pulled out of developing economies. Countries like India and China can ride out such a threat owing to their large forex reserves. But developing countries across Latin America and Africa, which are already under high debt pressures, can collapse under the strain.

So, while the decade presents a hope of prosperity, it also brings a multitude of threats. The way in which the scales tip will define not just the outcome of this decade but many more to come. As it did on October 24, 1929, when Wall Street came tumbling down pulling many livelihoods along with it.

The article was published with Economic Times on June 6, 2021.