Will anything change in India with new prime minister? 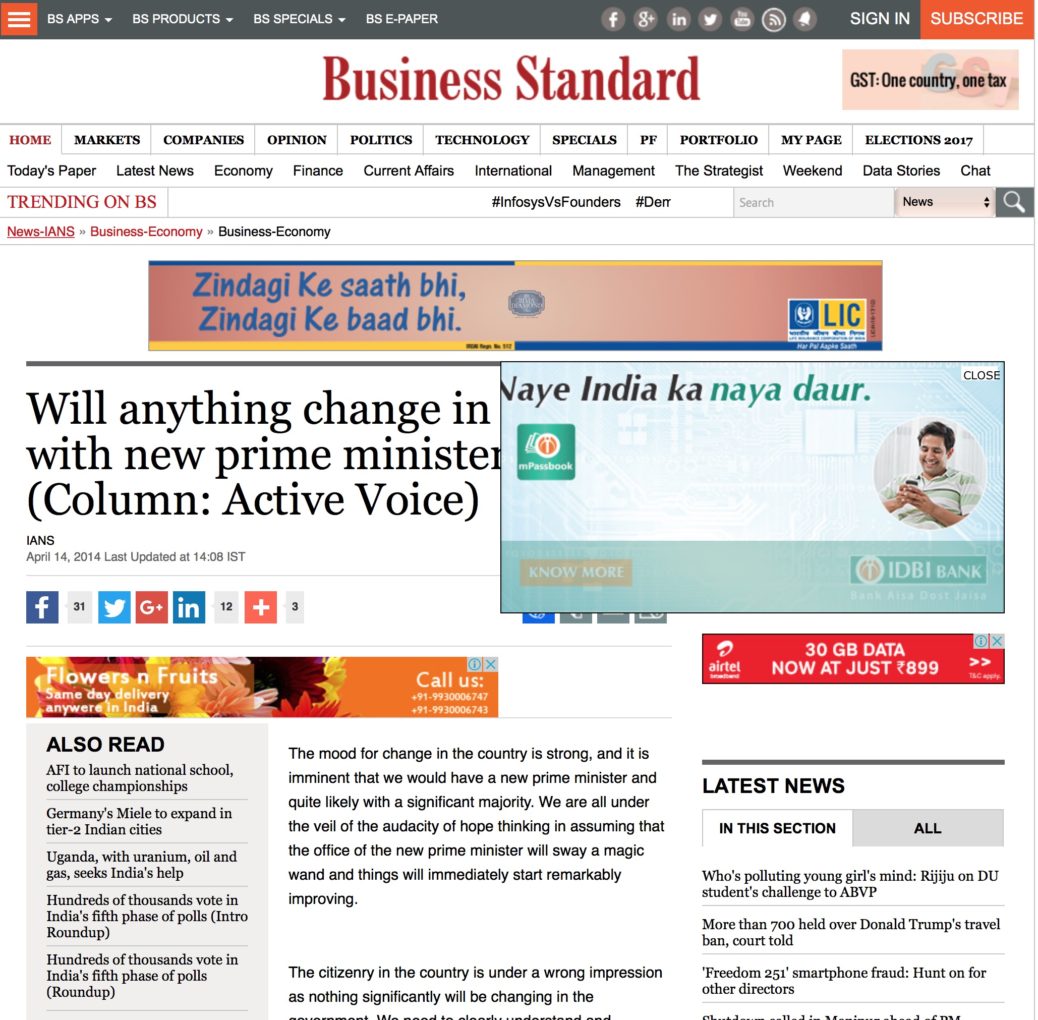 The mood for change in the country is strong, and it is imminent that we would have a new Prime Minister and quite likely with a significant majority. We are all under the veil of the audacity of hope thinking in assuming that the office of the new Prime Minister will sway a magic wand and things will immediately start remarkably improving in the country. The citizenry in the country is under a wrong impression, as nothing significantly will be changing in the government. We need to clearly understand and appreciate that changing someone in PM’s office will not change the government. We will have new set of ministers in the system, and that is the limit to change.  We shall see as the Government will still, as always, be run by the bureaucracy who would have the same set of ideas, stuck in the past with exceedingly shallow perspectives.

Why do I make such audacious statements? This is for a simple reason that within the parliamentary system very little changes. We are subjected to the same torturous thought and ethos of the old bureaucratic setup. We all know that there is no change in bureaucracy when the Government changes. The best we can see is transfer of certain bureaucrats to different departments and this is as well seen as an opportunity by the non-performing and defunct mind of the bureaucrat. To assert the point:  we can clearly state that millions within the government still remain exactly the same.

The problem within the system is that the Government employees are permanent (breeding incestuous ideas) and having the most power (incidentally brutal power with no accountability). It is a well known, though ignored, that it is really the bureaucrat who run the Government. The problem gets accentuated since the bureaucrat knows that he is governed by higher up in the bureaucracy with ministers having minimal influence over their careers. Without a doubt civil servants will typically cover each other backs with nobody accepting ultimate responsibility and accountability.

The understanding we need to build in this country is that if we wish to change the Government than we need to change the bureaucracy. We need to imbibe from the US system wherein the spoils go to the victorious. The president in the US gets to appoint everybody at the top and positions of significance i.e., secretaries at various departments. The secretaries in turn fill the positions within their staff bringing in new thought and perspectives. The most significant reality of this idea is that the bureaucrat in this case has not been part of the governmental system and is beholden by the idea of performing and keeping to the mandate as asserted by the President.  What matters here is that newer ideas come in with incestuous tendencies being taken care of and most of all having the ability to fire a non performing asset called the bureaucrat.

This also gets rid of the inertia to explore the new and getting to do new things. We can rebut this logic by stating that new people at the top shall cause chaos though rather we should understand that it is new ideas that bring in change and take the country forward.

If India needs to change, then it needs to change its bureaucracy and effectively its civil services. We can start with the idea of getting secretaries not from the existing system of selected bureaucrats but through nominations by the new Prime Minister. What we might need is a special commission that tries to understand and work towards dismantling the archaic bureaucracy, which is a remnant of the raj. The epical commission in in itself shouldn’t be formed by bureaucrats or former bureaucrats but by normal people who have not worked with civil servants, are outsiders on secondment, but quite likely have suffered from the hands of the tyrants.

Incidentally we could have Arvind Kejriwal as the head of the commission as he understands the bureaucracy, has suffered from its hands and it could be an exceptional political move from the next prime minister. I just hope that Narendra Bhai Modi is listening to this and acts decisively. He has run the election campaign akin to a Presidential campaign in US, and I do hope that he runs the Government in a similar way with an iron fist by getting rid of the archaic thoughts that are personified by the bureaucracy.