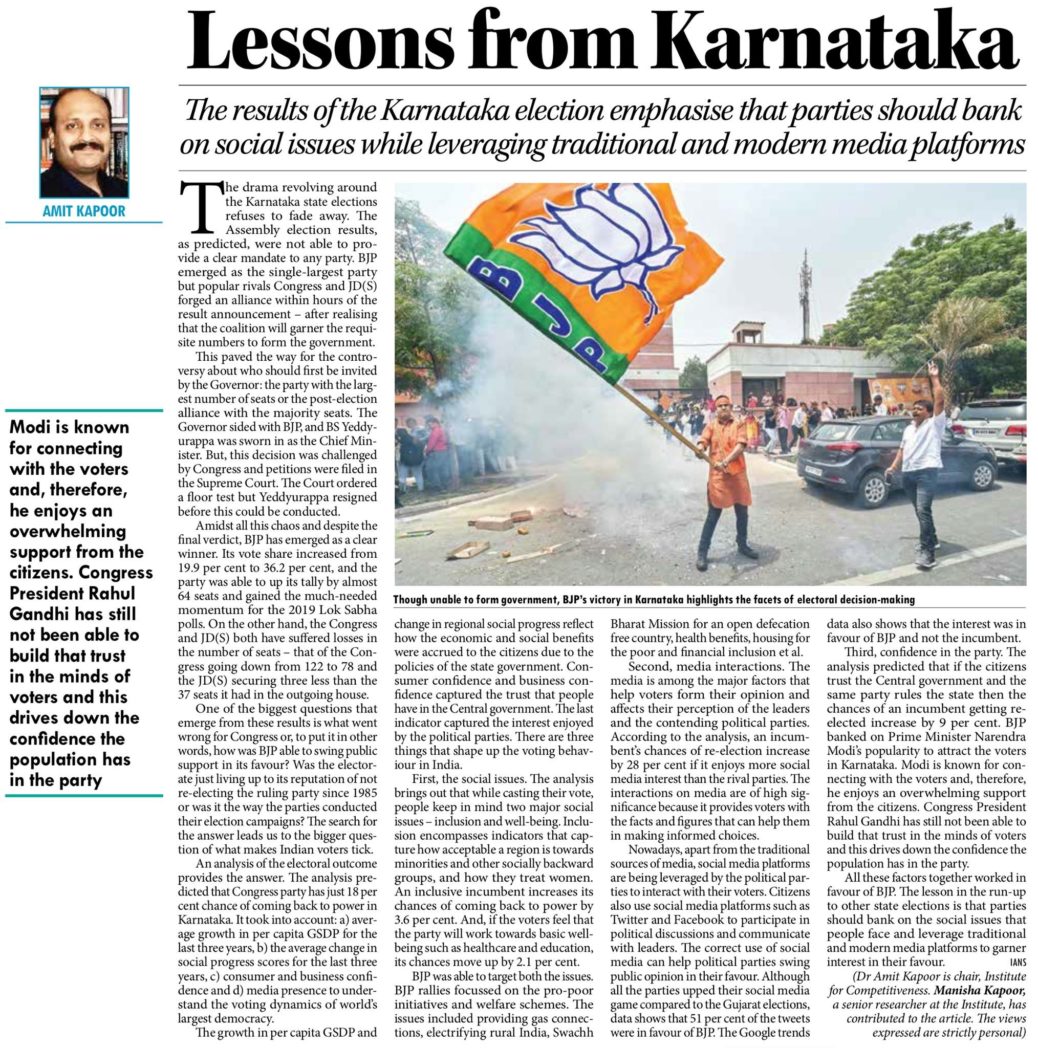 The drama revolving around the Karnataka state elections refuses to fade away. The assembly election results were not able to provide a clear mandate to any party. The BJP emerged as the single largest party but popular rivals Congress and JD-S forged an alliance within hours of the announcement of the result after realising that the coalition will have the numbers to form the government.

This paved the way for the controversy about who should first be invited by the Governor: the party with the largest number of seats or the post-election alliance with majority seats. The Governor sided with the BJP, and B.S. Yeddyurappa was sworn in as the Chief Minister. But this decision was challenged by the Congress and petitions were filed in the Supreme Court. The Court ordered a floor test but Yeddyurappa resigned before this could be conducted.

Amidst all this chaos and despite the final verdict, BJP has emerged as a clear winner. Its vote share increased from 19.9 percent to 36.2 percent, and the party was able to up its tally by almost 64 seats and gained the much-needed momentum for the 2019 Lok Sabha polls. On the other hand, Congress and JD-S both have suffered losses in the number of seats — that of the Congress going down from 122 to 78 and the JD-S securing three less that the 37 seats it had in the outgoing house.

One of the biggest questions that emerges from these results is what went wrong for Congress or to put it in other words, how was the BJP able to swing public support in its favour? Was the electorate just living up to its reputation of not re-electing the ruling party since 1985 or was it the way parties conducted their election campaigns? The search for the answer leads us to the bigger question of what makes Indian voters tick.

An analysis of the electoral outcome provides the answer. The analysis predicted that Congress party has just 18 percent chance of coming back to power in Karnataka. It took into account a) average growth in per capita GSDP for the last three years, b) the average change in Social Progress scores for the last three years, c) consumer and business confidence and d) media presence to understand the voting dynamics of world’s largest democracy.

The growth in per capita GSDP and change in regional social progress reflect how the economic and social benefits accrued to the citizens due to the policies of the state government. Consumer confidence and business confidence captured the trust that people have in the central government. The last indicator captured the interest enjoyed by the political parties.

There are three things that shape up the voting behaviour in India.

First, social issues. The analysis brings out that while casting their vote, people keep in mind two major social issues – inclusion and wellbeing. Inclusion encompasses indicators that capture how acceptable a region is towards minorities and other socially backward groups, and how they treat women. An inclusive incumbent increases its chances of coming back to power by 3.6 percent. And if the voters feel that the party will work towards basic wellbeing such as healthcare and education, its chances move up by 2.1 percent. The BJP was able to target both issues.

Second, media interactions. Media is among the major factors that help voters form their opinion and affects voter’s perception about the leaders and political parties. According to the analysis, an incumbent’s chances of re-election increase by 28 percent if it enjoys more social media interest than the rival parties. The interactions on media are of high significance because it provides voters with the facts and figures that can help them to make informed choices.

Although all the parties upped their social media game compared to the Gujarat elections, data shows that 51 percent of the tweets were in favour of BJP. The Google trends data also shows that the interest was in favour of BJP and not the incumbent.

Third, confidence in the party. The analysis predicted that if the citizens trust the central government and the same party rules the state then the chances of an incumbent getting re-elected increase by 9 percent. The BJP banked on Prime Minister Narendra Modi’s popularity to attract voters in Karnataka. Modi is known for connecting with the voters, and therefore he enjoys overwhelming support from the citizens.

All these factors together worked in favour of BJP. The lesson in the run-up to other state elections is that parties should bank on the social issues that people face and leverage traditional and modern media platforms to garner interest in their favour.

The article was published with Gulf Today, Millennium Post  on May 22, 2018.