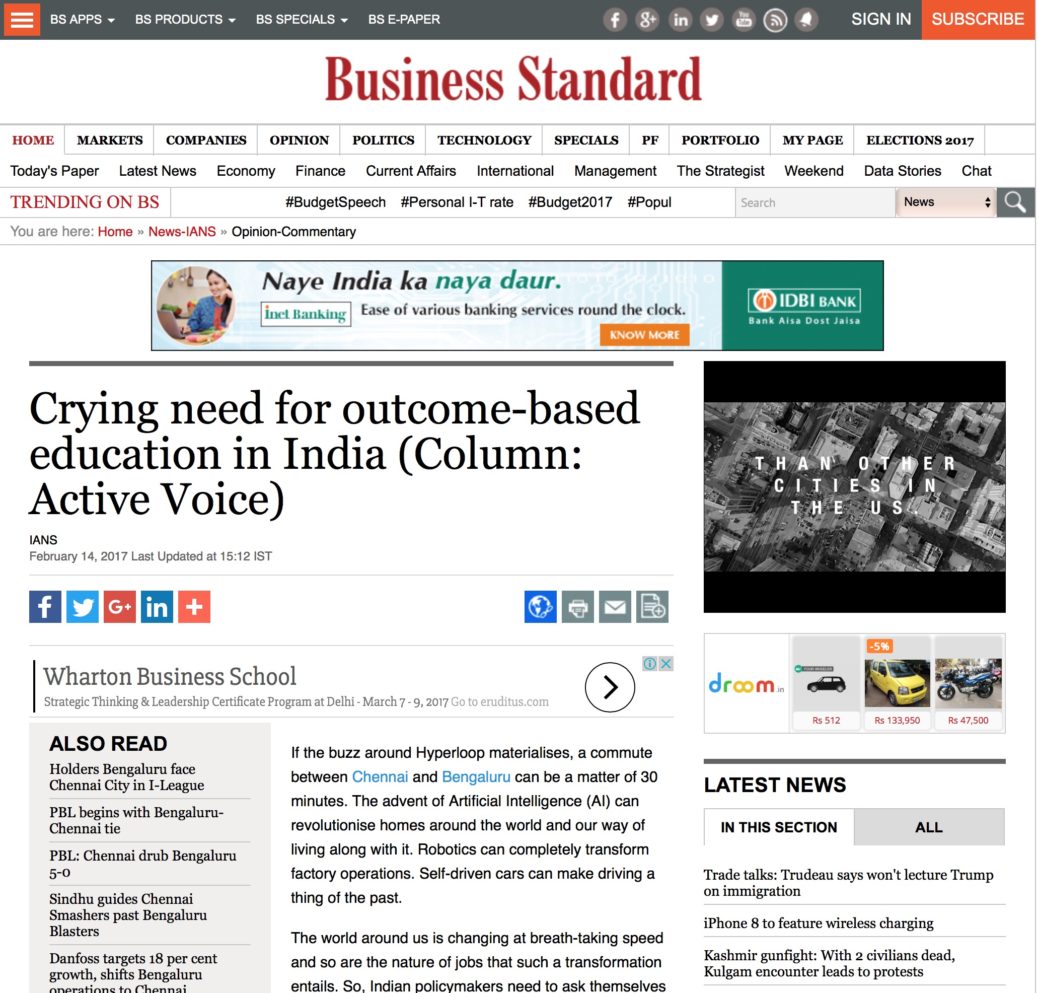 If the buzz around Hyperloop materialises, a commute between Chennai and Bengaluru can be a matter of 30 minutes. The advent of Artificial Intelligence (AI) can revolutionise homes around the world and our way of living along with it. Robotics can completely transform factory operations. Self-driven cars can make driving a thing of the past.

The world around us is changing at breath-taking speed and so are the nature of jobs that such a transformation entails. So, Indian policymakers need to ask themselves if policies are keeping pace with the changes that such rapid developments thrust upon us. More importantly, are higher education policies focussing on the right goals to achieve the skilling that industry requires?

The most important indicator of educational progress is easily the Gross Enrolment Ratio (GER). At present, at the higher education level, GER stands at a little over 24 per cent. There is also a class and gender-disparity in these figures, although the situation is improving in the latter case.

However, GER is a very narrow indicator of educational performance when seen in light of the rapidly-changing industry trends. Enrolling more students in institutes of higher education seems irrelevant if they are not being provided skills that are commensurate with the changing times.

The curriculum that is offered by institutes of higher education in India hardly keeps pace with industry demands. For instance, IT graduates are still being trained in dying programming languages like JAVA when expertise in fields like AI and robotics are the need of the hour.

Therefore, there is an urgent need to shift from input-based indicators of educational progress like GER to an outcome-based approach. India’s unrivalled youth demographics make such a shift all the more important and urgent for the country.

First, the shift towards outcomes needs to evaluate graduates based on their level of employability. The National Employability Report 2016 released by Aspiring Minds reveals a worrying state of affairs when it comes to employability of Indian graduates.

In the IT sector, which is the fastest-growing service sub-sector in the country, only 3.67 percent of graduates were found employable in IT product companies and 18 percent were employable in IT services companies. These figures clearly indicate that a narrow focus on enrolment is futile and the scope of measurement of educational performance needs to be expanded beyond inputs.

Second, the outcome measures also need to expand their scope beyond landing a job. Institutes need to be encouraged to impart a holistic understanding of skills that will be required for a life-long career. Therefore, innovative research undertaken within an institute needs to be given a higher weightage than placements. The exclusive focus on placements and packages of graduates at the cost of original research is failing to inculcate a sense of innovation among them and hence putting their skills at the risk of being irrelevant once the industry evolves.

Third, financing needs to be linked with outcome-based measures. The central government could allot additional funds to states that are performing well on certain pre-decided outcomes. Such an incentive could encourage competition among states to work upon improving the indicators that matter: Their educational outcomes.

An extreme focus on educational outcomes is seen in the practice of Outcome-Based Education (OBE) that has been adopted by many countries around the world. The US has adopted OBE since 1994 and the program has evolved over the years. Hong Kong and Malaysia have adopted a similar programme.

The system defines a set of outcomes that are to be accomplished at the end of the course and the faculty acts as a mentor to the student in achieving the defined goals.

There are multiple benefits from such a move. It creates a sense of clarity among students of what is expected of them. It gives the faculty flexibility on the method of teaching as their goal is to achieve a pre-defined set of outcomes and not just complete specific set of hours in delivering lectures. There is also much more involvement of students in the classroom as they are expected to do their own learning and gain complete understanding.

India needs a similar focus on outcome-based measures to skill its workforce for the evolving industry trends. There is an urgent need to understand the kind of jobs that the industry requires and create specific skill sets accordingly. The changing work environment across the world calls for a change in education curriculum and policies at a similar pace.

The article was published with Business Standard on February 14, 2017.