Here’s where the future of jobs in India lies 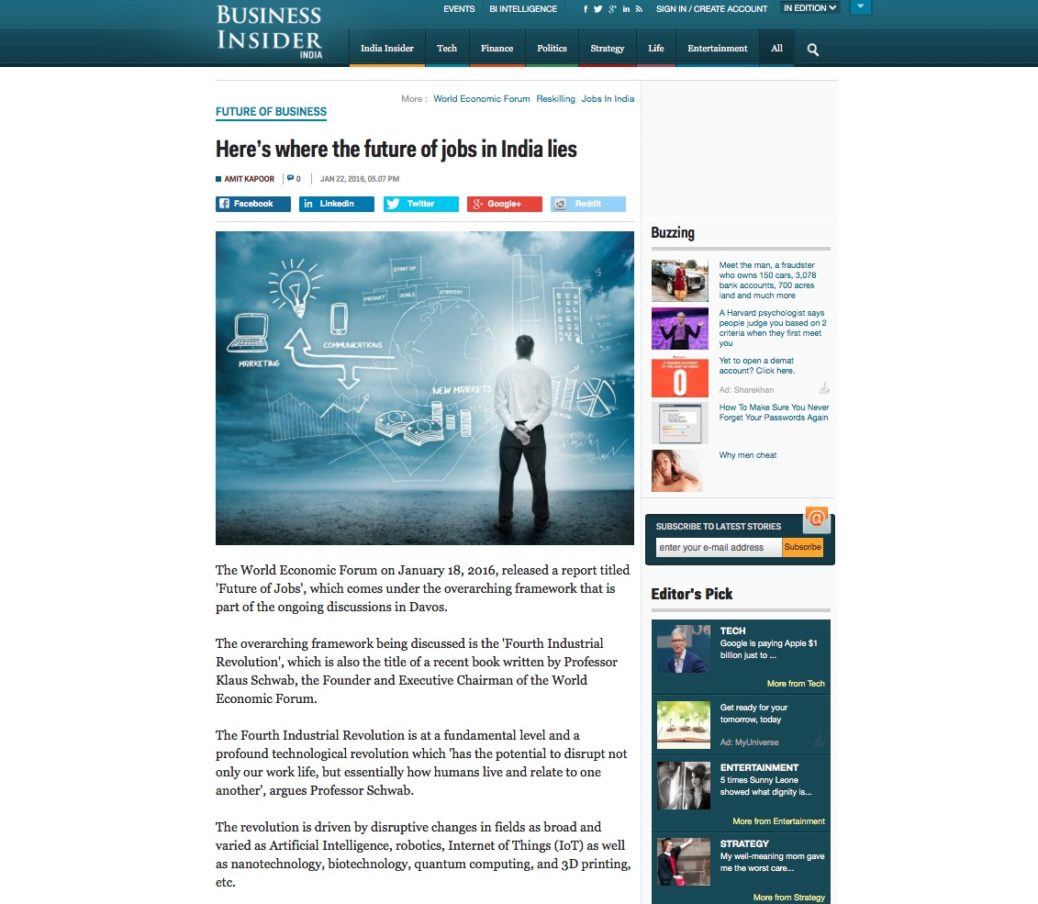 The World Economic Forum on January 18, 2016, released a report titled ‘Future of Jobs’, which comes under the overarching framework that is part of the ongoing discussions in Davos.

The overarching framework being discussed is the ‘Fourth Industrial Revolution’, which is also the title of a recent book written by Professor Klaus Schwab, the Founder and Executive Chairman of the World Economic Forum.

The Fourth Industrial Revolution is at a fundamental level and a profound technological revolution which ‘has the potential to disrupt not only our work life, but essentially how humans live and relate to one another’, argues Professor Schwab.

The revolution is driven by disruptive changes in fields as broad and varied as Artificial Intelligence, robotics, Internet of Things (IoT) as well as nanotechnology, biotechnology, quantum computing, and 3D printing, etc.

While it is hard to forecast precisely what the future will be like, it is important to look at some of the implications of this significant technological change. This is where the ‘Future of Jobs’ report becomes relevant.

The basis of the research is a questionnaire survey done by the WEF on 371 companies representing more than 13 million employees across nine broad industry sectors in 15 major developed and emerging economies and regional economic areas.

In technological drivers, a majority 34% believe that the ‘mobile internet and cloud technology’ is a major driver of change followed by ‘advances in computing power and Big Data’ which is rated by 26% of respondents as a primary driver of change.

An interesting analysis in the report deals with how jobs are going to shift because of the forces of fourth industrial revolution impacting various industries. In some cases, the net effect on employment is positive while in others the net effect is going to be negative.

The net negative industries include “Office and Administrative” sector where an estimated 4.8 million people are going to be adversely impacted over the period 2015-2020.

Similarly, another major loser is the ‘manufacturing and production’ sector where an estimated 1.6 million people are going to be adversely impacted. This is expected as a lot of work in the office space may be automated as well as technologies can make the human intervention in factories even more unnecessary. On the gainers side are industries like ‘Business and Financial Operations’ that can see an addition of half a million people due to these changes. Similarly, ‘management’ industry is another gainer which will see an addition of four hundred thousand jobs in the period 2015-20.

The report overall talks about an interesting framework for defining skills required for succeeding in such a scenario. There are three elements to the structure. The first of these include abilities that include cognitive abilities (like creativity, problem solving, logical reasoning, etc.) and physical abilities (like Physical Strength, Manual Strength, etc.)

Also, maximum skills demand is estimated to be for Complex Problem Skills (36%) followed by social skills (19%) and process skills (16%) till 2020.

The report also has a section on country profiles and for India, there are interesting insights.

The top trend like the outcome of global survey is perceived in a similar manner by Indian respondents as ‘Changing nature of work’ (43%), but this is followed by Climate Change and Natural Resources (40%). Similarly, a large number of respondents (69%) felt that the impact is going to be felt over 2015-17.

Also, 60 percent believed that strategies are suitable for dealing with the challenges. These strategies include investing in reskilling current employees (48%) are supporting mobility and job rotation (48%). 76% also believed that future workforce planning is a leadership priority for India.

Over the next few years, India not only in the formal space but in the informal space will have to rethink industrial development and the challenges that arise. The ministry of skill and entrepreneurship should take cues from the study to understand how forces of the fourth industrial revolution can radically reshape the employment scenario in the country. The aim should be to preempt this before it happens to help people succeed in the dynamic labour market.

Published with Business Insider on January 22, 2016.