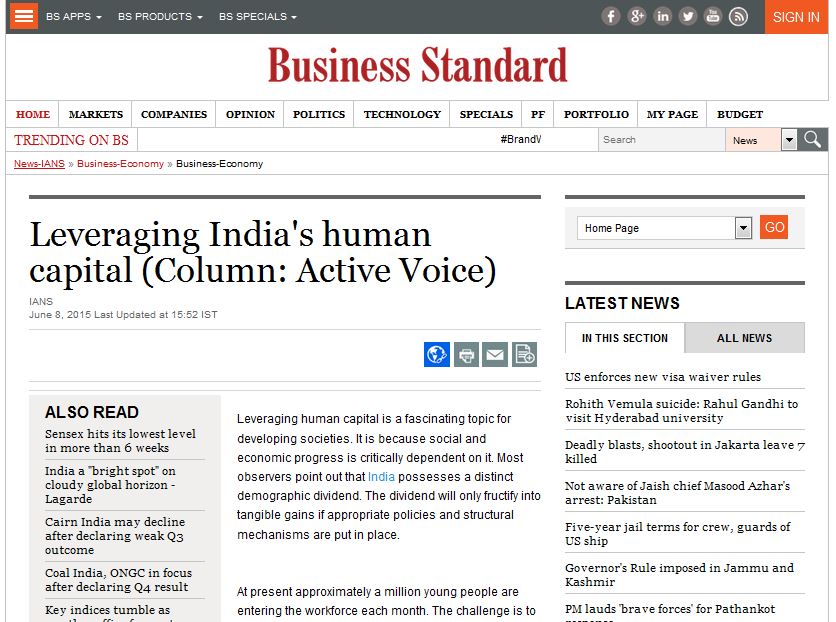 Till date, India’s policymakers have been slow to realize that the vast number of people it possesses can be a source of economic growth. This is because the poor population was always thought to be vulnerable and at the mercy of the rich and the powerful.

However, international experience of developed nations, especially democratic America and most recently communist China, has shown that this proposition may not necessarily be true. At distinct points in time, their populations have been instrumental in shaping the destiny of these two countries.

India is on the cusp of such a major economic opportunity and the policymakers are contemplating how to convert this demographic dividend into tangible economic growth. The Indian government has recently unveiled the National Policy on Skill Development and Entrepreneurship (NPSDE) that truly hopes to leverage the country’s potential in terms of its vast human resource.

The policy has been framed keeping in mind India’s present position and future requirements in regard to skill development and entrepreneurship. The policy has a distinct focus in five broad areas.

First, It starts by taking cognizance of the reality facing India. India as per data computed from (NSSO 66th round) only 2.3 percent of the workforce is formally skilled. This figure pales in comparison to 52 percent in the US, 68 percent in Britain, 75 percent in Germany, 80 percent in Japan and 96 perccent in South Korea. Apart from this, over the next seven years it is estimated that India will add 11.9 crore people to the existing workforce – estimated to be 48.74 crore, of which 30 crore need to be skilled, up-skilled and re-skilled. Thus, the challenge is to skill close to 42 crore people by 2022. In contrast, the capacity for skilling at present is limited to seven million people annually. That means we have the capacity to skill only five crore people by 2022. Thus, the thrust of the policy is rightly on scale, speed and standards. But even then it will be a monumental challenge.

Second, the policy’s broad level objectives remain in line with the country’s overall economic development. The policy seeks to promote not just skill development but also entrepreneurship that are both critical for India at this juncture. The vision statement spells this out clearly. The vision is “to create an ecosystem of empowerment by skilling on a large scale and speed with high standards so as to ensure sustainable livelihoods and to place India in the comity of front ranking entrepreneurial and innovative nations”.

Third, the policy lays out distinct frameworks for overall skill development and entrepreneurship within the country. The policy lays out 11 major directions and enablers in achieving the objectives of Skill India. These include enablers and major directions like aspiration, capacity, synergy, quality, development of trainers, ICT enablement and promotion of skilling among women et al. Similarly, the policy also has laid focus on a framework for entrepreneurship within the country. The thrust here is on infusing an entrepreneurial culture and embedding it in the educational sphere. The entrepreneurship framework also lays stress on grassroots innovations as well as in promoting inclusivity and the need to foster women entrepreneurship, access to finance and setting up a National Commission on Entrepreneurship. All these are notable areas, and an overarching framework that was earlier a missing element has found logical coherence in the one that has been proposed.

Fourth, the policy also clearly lays out the governance structure and financing mechanism for implementation of the NPSDE. Under the broad structure, the key role of coordination and implementation of the policy will lie with the Ministry of Skill Development and Entrepreneurship (MSDE). A National Mission for Skill Development and Entrepreneurship (NMSDE) will also be launched in the coming six months to work towards the objective laid down under the policy. The mission is slated to have an apex governing council and a mission directorate. The mission directorate will work with other national institutions like the National Skill Development Agency (NSDA), National Skill Development Corporation (NSDC), and the Sector Skill Councils (SSC). A new National Skill and Entrepreneurship Research Institute (NSRI) will also be set up in PPP mode that will have the primary purpose of research and advisory and will have horizontal linkages with the mission directorate. The structure seems to be well thought through and with clearly defined roles for each institution. For the financing aspect, The National Skill Development Fund (NSDF) has been set up. It will act as the focal point for all donations from all contributors including government, multilateral agencies, corporations and the like.

Finally, the policy is thought of as outcome-oriented and the government accordingly plans to set up a Project Implementation Unit to monitor the mission’s progress. It is a welcome step that will make progress easy to map and improve implementation outcomes.

The policy overall seems robust and has some very novel and unique ideas. But the challenge is also one that almost no country has faced in the past. Like all great programs, the policy must stand the test of implementation if India is to leverage the creative energy of its immense human resource pool.

Published with Business Standard on July 20, 2015.