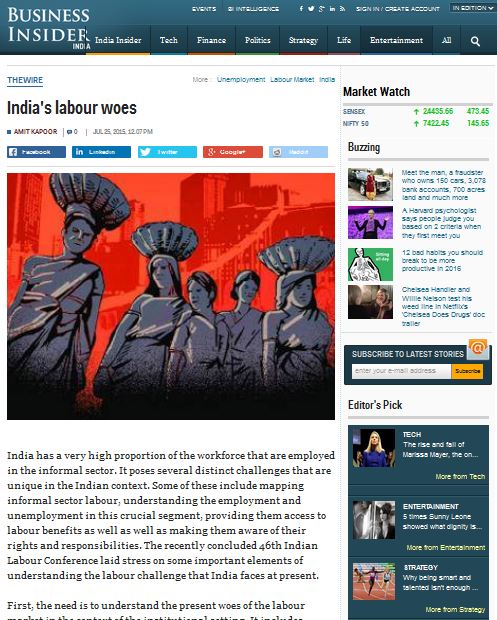 India has a very high proportion of the workforce that are employed in the informal sector. It poses several distinct challenges that are unique in the Indian context. Some of these include mapping informal sector labour, understanding the employment and unemployment in this crucial segment, providing them access to labour benefits as well as well as making them aware of their rights and responsibilities. The recently concluded 46th Indian Labour Conference laid stress on some important elements of understanding the labour challenge that India faces at present.

First, the need is to understand the present woes of the labour market in the context of the institutional setting. It includes bringing to the table a tripartite delegation having representatives from the Government, the industry and the labour unions. Rather than having just a few meetings between the government, industry representatives and labour union representatives the goal should be to have continuous ongoing discussions to formulate better policy and law for all the stakeholders. A one-sided perspective often acts as a hindrance to the overall balance that needs to be achieved between these three entities forming the basis of labour policy in the country.

Second, the issue of having a low self-esteem of people employed as labour needs to be tackled at all levels. It calls for changing the societal mindset that forces labour to have and maintain a low self-esteem. Often people employed as labour are looked down upon which results in this flawed outcome. It also has to do with the fact that there is often a mentality of non-recognition of employee and overt dependence on the employer leading to exploitation at the workplace. Recognising this through certification that the government is keen on pursuing is thus a step in the right direction.

Third, there needs to be a simplification of laws in the labour domain. Post independence some of the labour laws are enshrined in the Indian Constitution. However, culling of unnecessary laws and simplification from the present labour law is necessary. It is one of the major reasons why India has such a massive workforce in the unorganised sector. Employers often find it exceedingly difficult to hire. They also stay small in scale precisely to not come under the ambit of laws that apply to bigger enterprises. A plethora of laws has resulted in a situation where often it is difficult to decipher the precedence of what applies where. The laws rather than acting as an enabler for better employment often end up producing precisely the opposite result. The laws thus require a careful relook and will have to be simplified at both the central and the state level.

Fourth, the need is to provide skills to people who are not employed at present. There is often a mismatch between skill sets imparted at the educational institutes and the industry requirements. The company often asks for previous work experience, while the employee often asks for being given the work experience. The situation can be resolved by upgrading the curriculum and training methodology as well as providing more apprenticeships. The need is also to provide career-counseling services to students. This is where the recently dedicated national career service that plans to connect the 978 employment exchanges through IT will go a long way in improving job-related services for job seekers.

In the years ahead the opportunities for labourers needs to grow. The tripartite system of government, labour unions, as well as industry, needs to ensure that the opportunities expand at a rapid pace. They along with citizens also need to ensure that there is societal acceptance of people who work as labourers and there is the dignity of labour. Skilling of people in India holds the key for a demographic dividend that will propel economic growth.