Here are four trends that are present in Indian startups 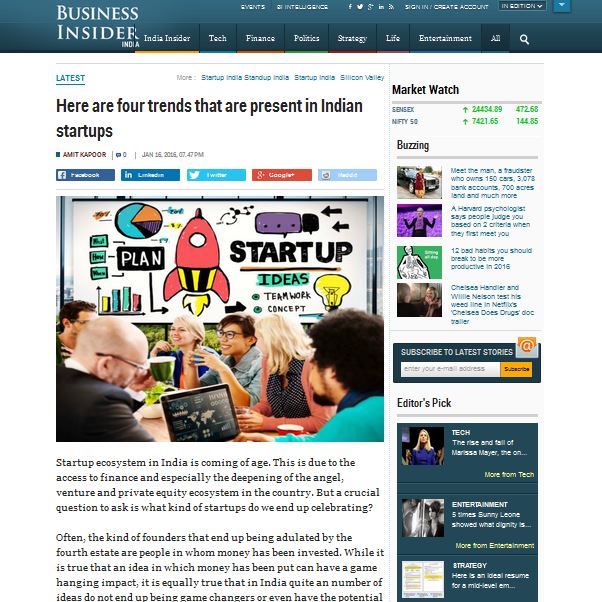 Startup ecosystem in India is coming of age. This is due to the access to finance and especially the deepening of the angel, venture and private equity ecosystem in the country. But a crucial question to ask is what kind of startups do we end up celebrating?

Often, the kind of founders that end up being adulated by the fourth estate are people in whom money has been invested. While it is true that an idea in which money has been put can have a game hanging impact, it is equally true that in India quite an number of ideas do not end up being game changers or even have the potential of being potential game changers for the industry.

There are certain trends that are observed in India’s deepening startup ecosystem.

First, the ideas tend to be too India centric. It is especially true in the case of technology entrepreneurship where what is observed is that too often the focus is on using existing business model approaches from the west and then reframing them in the Indian context. Take the case of a proverbial Flipkart (now moved to Singapore) versus an Amazon. It is not to suggest Flipkart is not a good company but just that it is building on an existing idea.

Second, for real progress to happen, business model approaches should not be reframed but rethought looking at the problems people face and finding solutions to those. The question to ponder over here is when will India create the next type of disruptive technology like a Google, or the next Skype that emerged from Tallinn, in Estonia?

Finally, another important point which is not given due credence are deeper structural issues and the quality of mentorship available for both social and technology startups. While some entrepreneurs do get embedded into entrepreneurial networks their remain deeper structural questions that need answers from all actors particularly the state. These pertain to deepening the government- university- research- and entrepreneurial ecosystems and the interactions that can lead to not only more prolific but also more viable ideas and innovations.

One must remember the example of Silicon Valley in U.S. to really see how deepening of these four can have a powerful impact on innovation and a nation’s growth. Also, the role of the state in context to entrepreneurship must be rethought. The ‘Startup India’ is a welcome step in this direction. In this context regulations for facilitating entrepreneurs need to brought which help them operate in a manner which benefits everyone. A state facilitating this interaction is important as it leads to the connected benefits of promotion of innovation, solving customer needs and tackling the challenge of job generation.

Over the longer time frame the potential exists for game changing/ radical innovation from India. How it realises it will depend on its performance in resolving some of the crucial factors highlighted above.

Published with Business Insider on January 16, 2016.