Are we prepared for the future of work? 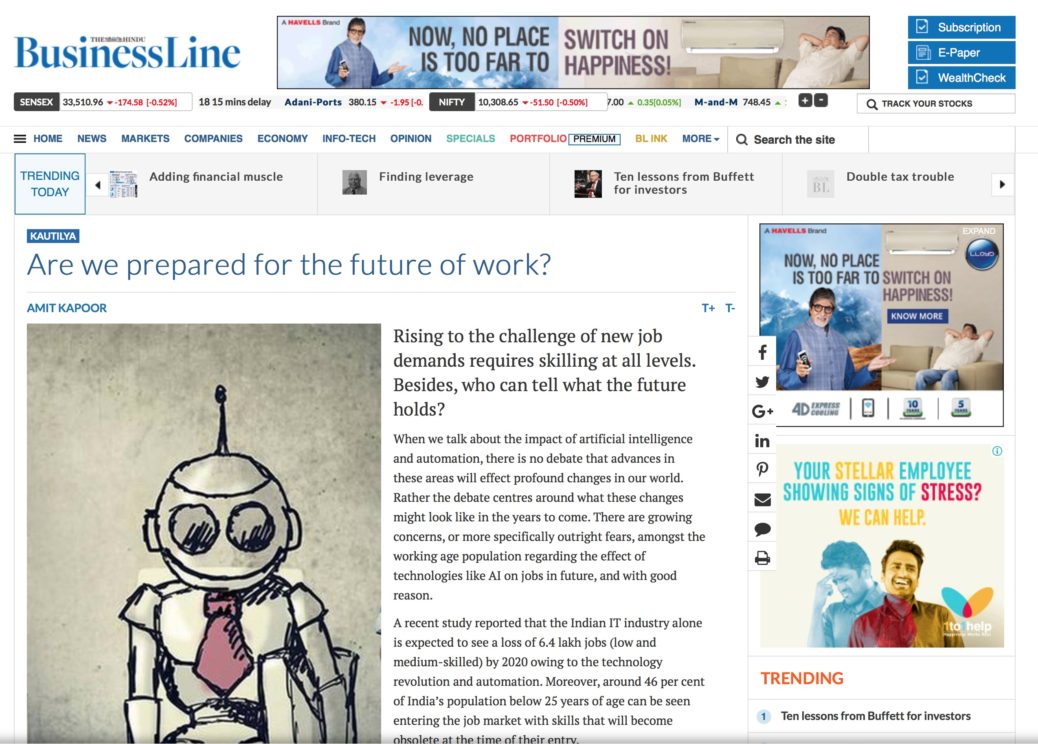 Rising to the challenge of new job demands requires skilling at all levels. Besides, who can tell what the future holds?

A recent study reported that the Indian IT industry alone is expected to see a loss of 6.4 lakh jobs (low and medium-skilled) by 2020 owing to the technology revolution and automation. Moreover, around 46 per cent of India’s population below 25 years of age can be seen entering the job market with skills that will become obsolete at the time of their entry.

This excludes 40 per cent of those in the age group of 26-55 years who are already employed in occupations which may be outmoded soon.

Apprehensions about job loss or displacement due to automation and AI are not new. Let us go back to the time of the Luddite movement. British textile workers in 1811 attacked and burned factories due to fears of machine operators robbing them of their livelihood. With the advent of personal computers and information technology in the 20th century many feared they would be replaced by computers.

Today, as we stand on the edge of a technological transformation which is evolving at an exponential speed, the same lookout seems quite natural although despite these concerns and fears history has demonstrated that every technological shift, while eliminating certain types of jobs, has ultimately ended up creating more. Besides, at a broader level, these technologies always have had the power to solve some of the great problems of mankind. For instance, AI is already driving great advances in medicine and healthcare with perfectly accurate diagnosis and far better disease prevention.

However, a word of cautionhere. Optimism about the future of the world of work relies on two flimsy premises. First, what we have witnessed in the past is most likely to be an accurate predictor of what we are going to witness in the future; and second, we can withstand the accompanying painful transition.

Pointing to past experiences as a response to fears concerning automation and AI works well only when the future is guaranteed to pan out similarly. There are strong reasons to believe that the future will play out differently. This brings us to the second premise. Even if we presume that jobs will be eliminated and there will be new jobs to replace them the question is: What kind of jobs will be created and what will be done away with?

Reports suggest that anything that requires middle skills will be made redundant first; low skilled and highly skilled jobs are comparatively less vulnerable. Without massive upskilling and quality higher education, it will not be possible for the middle skilled to move into jobs requiring a high level of skill. Moving into less-skilled jobs makes no sense either and therefore the transition will be painful. An economic scenario where there is high unemployment consisting of individuals incapable of getting a job simply because they do not possess the required skills can become a reality if India doesn’t prepare adequately for the future of jobs.

The next logical question is: How do we prepare ourselves? At the minimum level, by reinventing our higher education system and by providing the means for people to re-skill themselves significantly. What that means is that a shift to lifelong learning is essential. As the pace of technological change quickens, we need to be sure that our youth keep up with the right skills to thrive in the ever-changing world of work.

Prime Minister Narendra Modi has been voicing his optimistic views on AI with respect to the road ahead. It is heartening to see that our government is working towards supporting a technology-driven future. The intent can also be traced in the budgetallocation for Digital India (the amount has almost been doubled). However, shouldn’t more efforts be made to strengthen the focus on how to mend our higher education ecosystem altogether? After all, we don’t want our employees to compete with technology that can disrupt almost every other industry. Instead, it would be more meaningful to leverage synergetic complementarity between the two.

The article was published with Hindu Business Line on March 16, 2018.
Share this
0 likes
Related Articles