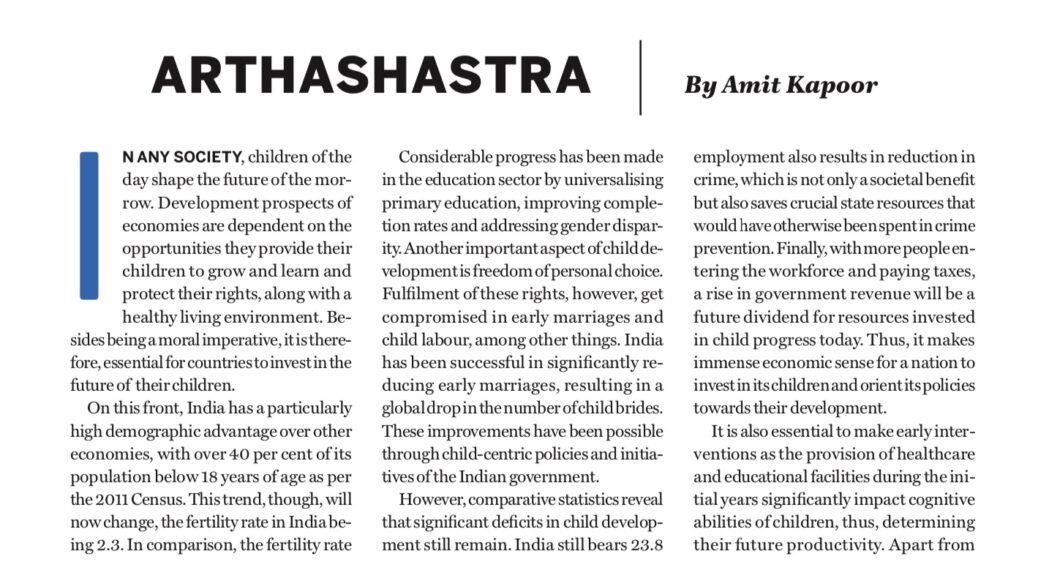 In any society, children of today shape the future of tomorrow. The development prospects of economies are dependent on how well they are able to provide their children with opportunities to grow and learn, protect their rights, and presents to them a healthy living environment. Therefore, besides being a moral imperative, it is essential for countries to invest in children’s future.

On this front, India has a particularly high demographic advantage over other economies with over 40 percent of its population below 18 years of age as per the 2011 Census. Although this trend would now be falling, the fertility rate in India is 2.3. By comparison, the fertility rate in China is 1.63. Thus, the population of children in India will remain significantly high for some time providing India an opportunity to ensure better child progress to reap future demographic dividends.

India has undoubtedly made significant progress towards ensuring child progress in recent times. Being among the fastest-growing economies in the world has enabled the country to make significant progress across different facets of child progress. For instance, in basic nutrition, child stunting declined from 48 percent in 2006 to 38 percent in 2016, and anaemic children declined by 11 percentage points during the same period. The under-five deaths also fell below 1 million for the first time ever.

Considerable progress has been made in the education sector by universalizing primary education, improving completion rates, and addressing gender disparity. Another important aspect of child development is freedom regarding personal choices. The fulfilment of these rights is compromised through early marriages and child labour, among other things. India has been successful in significantly reducing early marriages, resulting in a global drop in the number of child brides. These improvements have been made possible with the child-centric policies and initiatives by the Indian government.

However, comparative statistics reveal that significant deficits in child development still remain. For instance, on the health front, India still bears 23.8 percent of the global burden of malnourishment. The spending on healthcare in India is fairly low at around 3.35 percent of the GDP compared to world average of 10.02 percent.

There is an urgent need for India to act upon these issues as the extent of gains to the country will be significantly far-reaching.Improvement in health relates positively to the GDP since a healthy workforce contributes to productivity. Apart from the productivity gains, there are other indirect benefits of child progress. First, when children get adequate nourishment and proper education, they are less likely to depend upon public welfare later in life.

Secondly, higher employability and employment also results in reduction in crime, which is not only a societal benefit but also saves crucial state resources that would have been spent in crime prevention. Finally, with more people entering the workforce and paying taxes, the rise in government revenue will accrue almost as a future dividend for resources invested today into child progress. Thus, it makes immense economic sense for a nation to invest in its children and orient its policies towards their development.

It is also essential to make early interventions as the provision of healthcare and educational facilities during the initial years significantly impact children’s cognitive abilities, thus, determining their future productivity. Apart from affecting their lifetime opportunities through learning capabilities, it will also have a profound impact in creating the human capital that the country needs to boost development in the coming decades

However, conducting a regional level analysis on child progress to envelop the spatial differences across India’s regions is a prerequisite for making such interventions. Across the vast expanse of the nation, it is not surprising to find inter and intra state variations in economic as well as social conditions. A local policy that is customised based on regional strengths and weaknesses would prove to be more effective than a common one-size-fits-all approach by the central authorities.

The article was published with Business World dated July 6th to July 19th, 2019