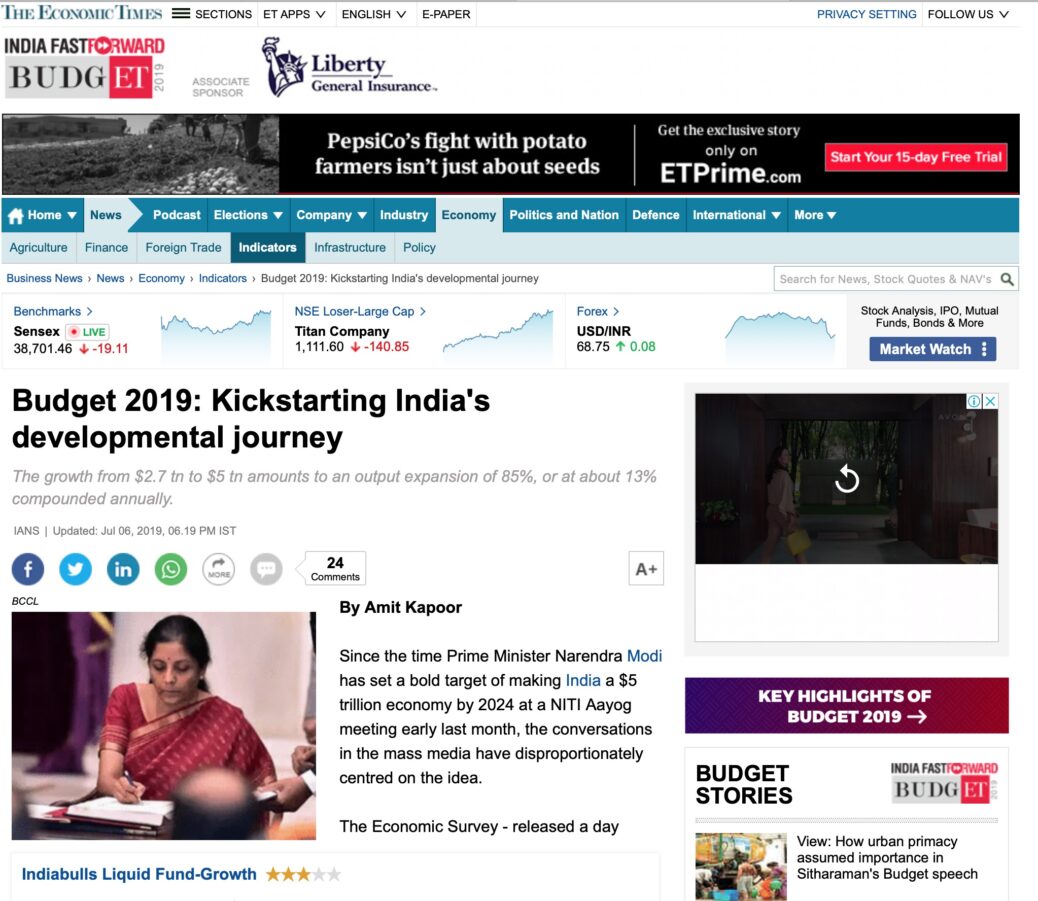 Since the time Prime Minister Narendra Modi has set a bold target of making India a $5 trillion economy by 2024 at a NITI Aayog meeting early last month, the conversations in the mass media have disproportionately centred on the idea.

The Economic Survey – released a day before the Budget was presented in accordance with tradition – elaborated upon the idea and suggested that India needs to grow at least at 8 per cent per annum to achieve the target.

As per our estimates, however, this figure seems conservative. The growth from $2.7 trillion to $5 trillion amounts to an output expansion of 85 per cent, or at about 13 per cent compounded annually.

Assuming inflation of 4 per cent, which is the mandated target for the Reserve Bank of India (RBI), the required real growth of the Indian economy is estimated at 9 per cent per annum. Nevertheless, in either case it can be argued that the $5 trillion target will be challenging for the Indian economy.

The few economies that have achieved such high growth rates on a sustained basis are Asian economies like China and South Korea. The survey rightly identified investment, and more specifically private investment, as the key driver of such sustained economic growth, which has been the case for these high-growth economies.

It recommended that on these lines, the private sector needs to be re-vitalised and an aggressive exports strategy should be followed. Such a suggestion raised hopes of a fiscal stimulus from the budget of the newly elected government. This would have complemented the monetary stimulus being provided by the RBI through three successive rate cuts.

The budget did chalk out a blueprint for undertaking large-scale infrastructure activities, which are usually the means adopted to provide a fiscal stimulus. The plan includes improving the country’s transport infrastructure through the construction of water grids, I-ways and regional airports along with a massive boost to develop the rail infrastructure over the next decade.

But instead of infusing taxpayer money, the budget proposed the Public Private Partnership (PPP) model to meet its financial needs. While such a model might be fiscally prudent, the PPP model might face challenges to take off as the investment activity in the economy is already subdued and a more direct fiscal push would be required to kickstart growth.

For now, the government has prioritised fiscal prudence by lowering the fiscal deficit target to 3.3 per cent of the GDP for FY20, which had been pegged at 3.4 per cent for the current fiscal in the interim budget.

While the intent to stay on the path of fiscal consolidation is commendable, it would not have been as problematic to ease on the tightening considering the urgent need to improve economic growth currently.

But a deeper look into the budget figures shows that the lower fiscal target might be missed next year. The fiscal deficit target of 3.3 per cent is based on the estimate that the net tax revenue for the current fiscal would see an increase of over 25 per cent over the previous fiscal.

This seems optimistic when considered against the fact that the tax revenues had merely risen by 6 per cent in the last fiscal cycle. A fiscal stimulus was probably avoided in the current budget keeping the uncertainty of the tax revenues in mind.

Another case of where the budget financial estimate can prove optimistic is in the disinvestment target of over Rs 1 lakh crore, which includes the sale of Air India. Considering the current state of the airline sector, an imputation of the sale of the debt-ridden government airline should be included with caution. Thus, steering clear of fiscal exuberance was probably the appropriate approach.

While the path to a $5 trillion economy is a medium-term goal, the budget also carried promising elements that point to the right directional approach that the economy should adopt over the long run.

It has long been argued that the obsession with GDP figures fails to take into account the real issues that matter to the citizens of a country. The idea that higher output leads to higher incomes, which would enable well-being of citizens can be simplified by directly ensuring improvement in the well-being of the populace.

Hence, the stress on enhancing the ease of living in the budget is a commendable idea to pursue. Surely, the provision of efficient services in a society – be it health or education – supersede the specifics of growth levels at 8 or 9 per cent for the average Indian citizen.

The government has a rare opportunity to introduce such impactful change in the Indian economy owing to its strong electoral mandate and it is promising to witness its effective utilisation on this front.