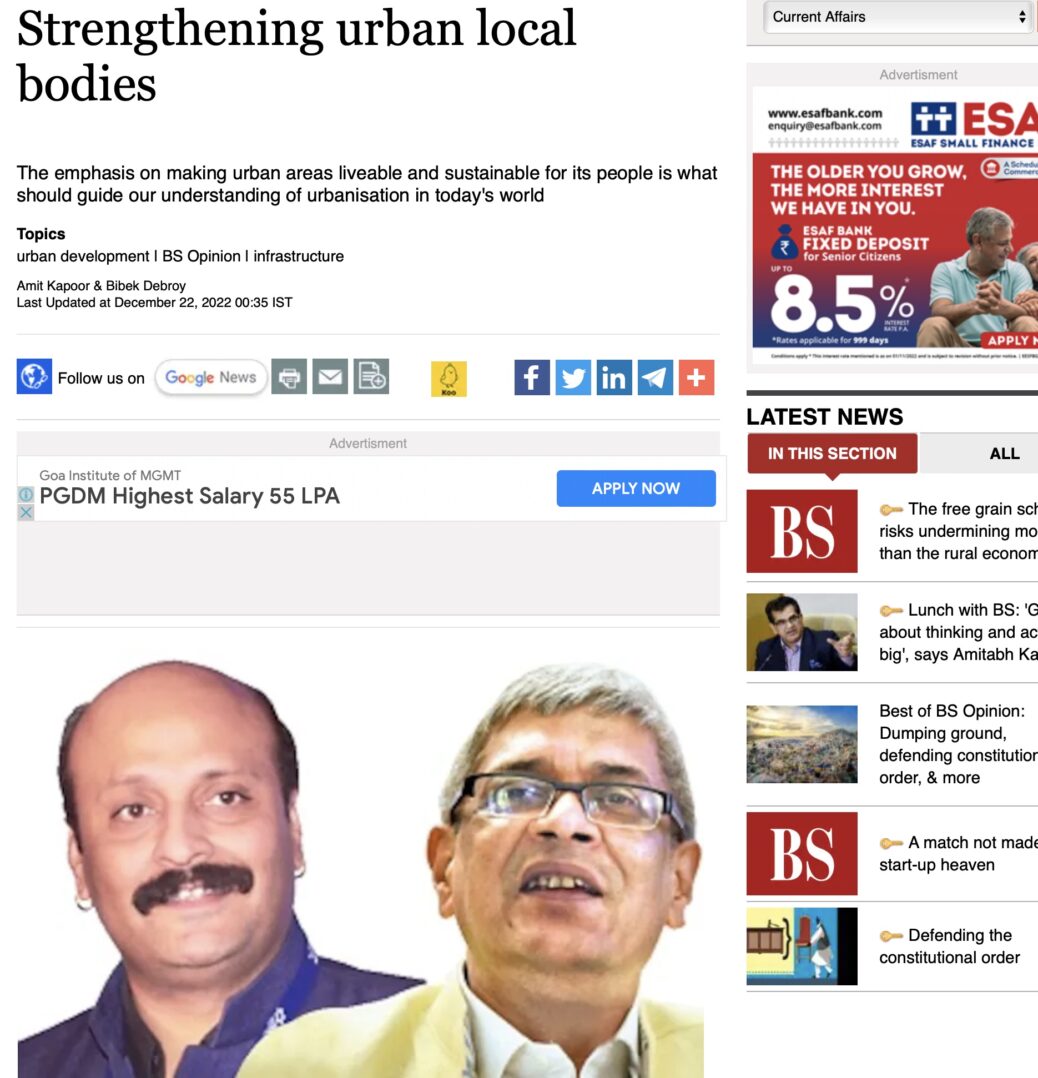 Looking at urbanisation as merely a process of the population shift from rural to urban areas makes us lose sight of what actually lies at the core of this process. The emphasis on making those urban areas liveable and sustainable for its people is what should guide our understanding of urbanisation in today’s world. This requires mechanism building and implementation at multiple levels starting from putting in place effective governance systems in the form of local governments at the grassroots levels. An effective local government can not only promote healthy urban growth but also ensure ease of living for the population.

In India, local governments in cities are established in accordance with the 74th Amendment Act that creates the ground for democratic decentralisation in urban areas. This institutional framework comprises Urban Local Bodies (ULBs) that administer cities or towns with a specified population. These local bodies are entrusted with functions related to welfare, public health and safety, infrastructural works and other activities related to city development. Municipal corporations, municipalities, notified area committees, and town area committees are some types of urban local bodies. The 74th Amendment to the Constitution gives state legislatures the authority to enact levies that support local government budgets. Accordingly, it is constitutionally required for the state governments to establish means for ULBs to raise money. The state governments should provide ULBs authority to impose taxes on behalf of municipalities and collect funds on their behalf. This covers taxes, duties, fees, and other assessments that local governments may levy and collect in accordance with the rules that will be outlined in state law. Additionally, the state government may also levy and collect taxes, duties, fees, and other similar charges, of which a portion would then be distributed to the municipalities. State grants-in-aid that would be provided to the municipalities and establishment of funds for municipal crediting and withdrawal of funds are some other ways mandated under the 74th Amendment act, through which adequate funding of municipalities could be envisaged.

The 74th Constitutional Amendment Act, which gave municipalities constitutional standing and a strong mandate for democratic decentralisation through self-governing local bodies in urban areas, marked a turning point in the development of municipalities. However, this had a little structural impact on how municipal corporations operated. According to the Reserve Bank of India, financially starved, Indian cities are unable to create the resources needed to offer their residents high-quality facilities and services. As a result, for instance, India’s access to basic urban infrastructure falls short of what has been accomplished in the OECD and other BRICS countries. While the government financial architecture in many industrialised economies permits for increased fiscal decentralisation, the idea is still relatively new in underdeveloped nations. The transfer of duties from the national and subnational governments to local governments has not always been accompanied by a corresponding transfer of financial authority.

Moreover, Municipal Corporations in India rely heavily on subsidies from the Central and State governments to cover their spending needs because they have few other sources of income. Over-reliance on property taxes has prevented local governments from fully utilising other revenue streams such as trade permits, entertainment taxes, mobile tower taxes, solid waste user fees, water fees, and value capture finance. As per the Third State Finance Commission Report of Uttarakhand (2018-19), the ULBs in India must increase their efficiency in collecting parking fees, advertisement taxes, user fees, lease rentals, and property taxes.

As noted in the Sustainable Development Goal (SDG) 11: Sustainable Cities and Communities, the effective city government is essential for sustainable development. In order to create inclusive, secure, resilient, and sustainable cities, national development strategies must be put in place. The focus should be placed on easing resource restrictions for the operation of ULBs when developing capacity for sustainable urbanisation. Additionally, as a web-based e-governance system can be participatory and improve the effectiveness of local governments’ operations, its full potential needs to be investigated. The range of e-services can be much expanded, despite recent initiatives by municipal corporations to establish web-based property tax payments being significant milestones in this direction. Greater public participation and better public service delivery will be made possible by modernising local governance systems and getting them to work closely with local communities in accordance with a clear and effective administrative structure.

The article was published with Business Standard on December 21, 2022.