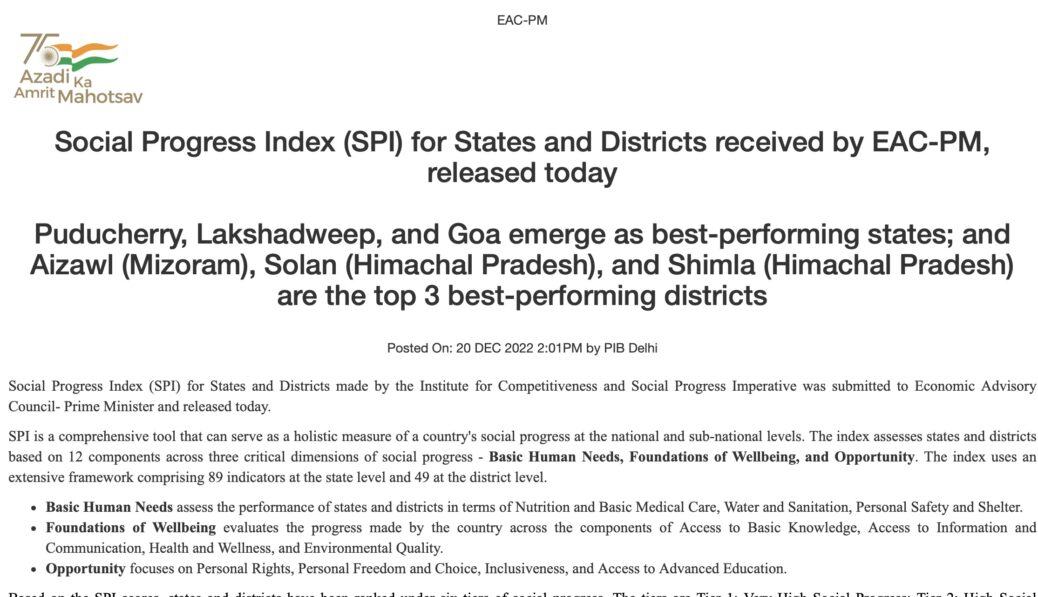 Social Progress Index (SPI) for States and Districts made by the Institute for Competitiveness and Social Progress Imperative was submitted to Economic Advisory Council- Prime Minister and released today.

SPI is a comprehensive tool that can serve as a holistic measure of a country’s social progress at the national and sub-national levels. The index assesses states and districts based on 12 components across three critical dimensions of social progress – Basic Human Needs, Foundations of Wellbeing, and Opportunity. The index uses an extensive framework comprising 89 indicators at the state level and 49 at the district level.

Puducherry has the highest SPI score of 65.99 in the country, attributable to its remarkable performance across components like Personal Freedom and Choice, Shelter, and Water and Sanitation. Lakshadweep and Goa closely follow it with scores of 65.89 and 65.53, respectively. Jharkhand and Bihar scored the lowest, 43.95 and 44.47, respectively.

For the dimension of Basic Human Needs, Goa, Puducherry, Lakshadweep, and Chandigarh are the top four states with the best performance in Water and Sanitation and Shelter as compared to the other states and union territories. In addition, Goa has the highest component score for Water and Sanitation, followed by Kerala, scoring the highest across the Nutrition and Basic Medical Care component. For Shelter and Personal Safety, Chandigarh and Nagaland have emerged as the front-runners, respectively.

Mizoram, Himachal Pradesh, Ladakh, and Goa have emerged as the best-performing states for the Foundations of Wellbeing. Within the dimension for the Access to Basic Knowledge component, Punjab has the highest component score of 62.92, while Delhi has topped the list for Access to Information and Communication with a score of 71.30. For Health and Wellness, Rajasthan has the highest component score of 73.74. For Environmental Quality, the top three states belong to the northeast region, namely, Mizoram, Nagaland, and Meghalaya.

By evaluating change in the performance of some key indicators since 2015-16, the report presents a broad picture of the social progress in India. In addition, the report highlights progress made by the 112 aspirational districts in the country, helping them track their social progress journey and understand the areas that require more attention.

The findings in the report are based on a robust methodology and in-depth research and analysis, paving the way for policymakers to take informed decisions in the years to come. It also marks the start of the next phase in the social progress journey and hopes to advance the cause of social progress in the country.

In his opening remarks, Dr Amit Kapoor, Honorary Chairman, Institute for Competitiveness and Lecturer, Stanford University, explained, ‘The Social Progress Index report is an independent body of  work where the focus has been on three pillars of social progress – Basic Human Needs, Foundations of Well-being and Opportunity. There has not been an index that looked at social parameters with such depth and analysis in the Indian context. The next step is to do a longitudinal assessment of these indicators to study the changes over time and the effects of those changes.”

The index has contributions from Michael Green, CEO of the Social Progress Index, who stated, “The Social Progress Index report unleashes the power of benchmarking and offers a tool that is relevant to governments at the national and state levels to create scalable and practical actions to deliver to the people of India. It can act as a common language for the government, businesses and civil society to work towards briniging inclusive growth by focusing on economic and social progress alongside.”

The interactive online platform can be accessed from:

EAC-PM Chairman Bibek Debroy while releasing the report, said, “The report is based extensively on objective data and is primarily a normative/prescriptive exercise. It presents a cross-section of data across states and districts and the focus is on looking at various tiers of development by grouping the states rather than the individual rankings of the selected states and districts.”

Prof. Sonalde Desai, Professor, NACER lauded the report, “It is an excellent diagnostic tool for the state and district administrators to study the areas that need improvement. There is no better compendium than this report, at the moment, that offers such a diagnosis. The most interesting part of the report is the diversity among the districts and I would encourage you to compile a ranklist of heterogeneity among the states”

Sanjeev Sanyal, Member EAC-PM, remarked, “ GDP is an incomplete measure of progress, though not inaccurate. Endeavours such as the Social Progress Index that study social parameters, the methodologies and analysis of the data can be made more robust and reliable.”

Dr. Charan Singh, CEO EGROW Foundation, also commented, “We will have to weave in sociological factors into economic progress given that purely economic indicators have time and again failed to capture non-economic issues. Singular focus on GDP is problematic.”

The Report can be downloaded from: