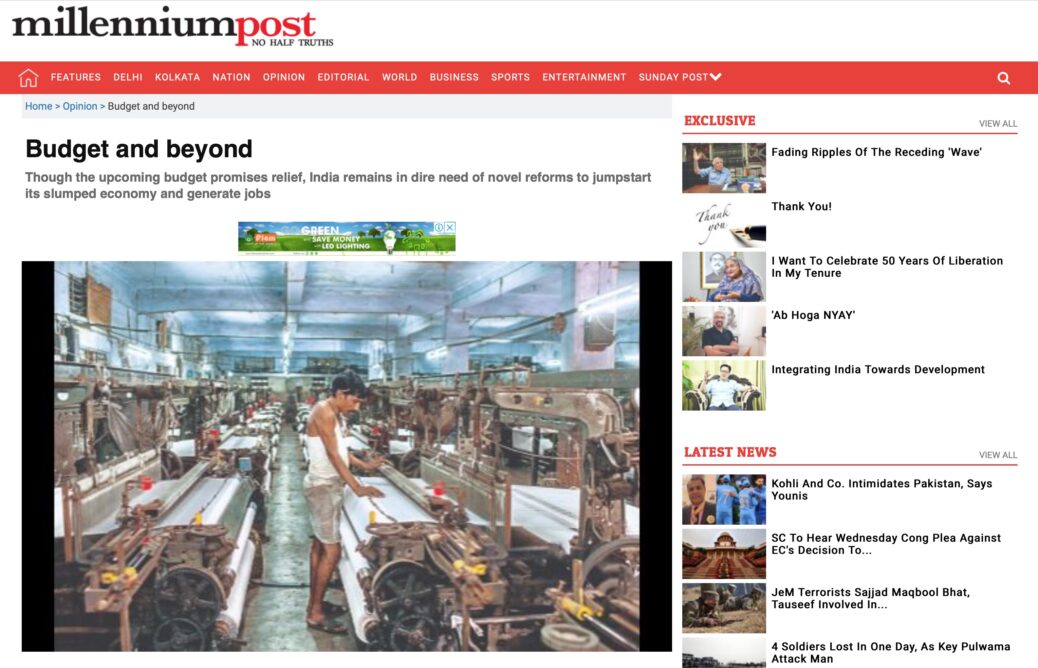 The Budget and Beyond

How does one determine the finances of a country where the growth rate is slowing, banks are sceptical to lend and tightening fiscal space leave little scope for adventurism? That is the impossible conundrum facing Nirmala Sitharaman, India’s first female finance minister in the Modi government’s new Cabinet. It will be interesting to note how she addresses these pertinent issues facing the Indian economy when she rises up in Parliament on July 5 to deliver her Budget address.

It would not be stretch to argue that Sitharaman is facing the toughest task of all ministers in the Modi cabinet. The two significant hurdles currently ailing the economy are that of growth and employment. As soon as the new government was sworn into power, the data released by the Central Statistics Office (CSO) revealed that the GDP growth had fallen to a 5-year low in the last quarter of the previous financial year while another report released by the National Sample Survey Organisation (NSSO) stated that the unemployment in the country had touched a 45-year high of 6.1 percent in 2017-18. Although the government has said the latter figure is not comparable to previous years, it is still an issue that Sitharaman will look to address in her first budget.

At first glance it might seem that the issues of growth and unemployment are linked and solving the former would address the latter. However, this would be a dangerous assumption to make for the Indian economy. India has had an infamous trend of jobless growth due to its economy being primarily service led. In fact, even during its fastest-growth period between 2004 and 2009, only a million jobs were created in the five-year period when more than a million jobs were needed on an annual basis.

This only goes to show that both issues need to be resolved independently and, at least for the latter, the problem is more structural in nature. So, the solutions must be a combination of short-term and medium-to-long-term. Even though these solutions will pertain to policy decisions that extend beyond the Budget, allocating finances in the right places of the economy is a good place to start. No electoral compulsions are also tied to this Budget, so it has the potential to be bold and target oriented as possible.

To address the issue of growth slowdown, it is necessary to go to its root cause. There are two sides to the story: supply and demand. In the supply side, to put it simply, India’s credit system is clogged. The capital of Indian banks is locked up in Rs 14 lakh crore of stressed assets and, despite all efforts to the contrary, the resolution mechanism is still slow. The public sector banks (PSBs), which account for two-thirds of the banking system, are facing serious capital shortages, which has made them risk-averse and, thus, wary of lending. As credit availability dries up, the fuel that drives investment vanishes, slowing the latter. Gross fixed capital formation, or investment in plan has machinery, has dipped to 31 percent from 34.3 percent of the GDP in 2014.

Meanwhile, the demand side of the issue lies in falling domestic consumption as evidenced in the latest data provided by the Ministry of Finance, which shows the growth in sale of two-wheelers falling into negative territory. However, this is only a sign of the slowing economy as people are left with less disposable income to spend on goods. Once investment revives, money will flow through the system and consumption will pick up.

So, the Budget needs to focus on reviving investment and the obvious tool of boosting public investment is also not available as the fiscal deficit is well above its target already. Moreover, history shows that governments have a tendency of reducing expenditure post-elections. And the target to revive investment should be to allay the prevailing risk aversion of banks. One way is to use the surplus RBI capital for bank recapitalisation. There will be more clarity on this front once the Bimal Jalan Committee submits its report later this month. An additional solution, which is also more structural in nature, would be to implement the recommendation of the PJ Nayak Committee to set up a Bank Investment Company as the holding company for various state-owned banks. This would create a certain autonomy in operations of public banks without government interference and improve their lending behaviour.

The second issue of job crisis is a long-standing problem for India and cannot be resolved in a Budget or two. The Budget can only provide a fiscal stimulus package like the one India saw implemented in 2009 as a response to the financial crisis. But a more long-term redressal of the problem is crucial as I’ve argued through these columns before. Improving the productivity of India’s labour through education and skilling is indispensable.

Beyond that, a data-based approach towards policy making can also prove helpful here. Employment elasticity, a measure of how employment varies with economic output, can be measured for the economy and each sector within it. Targeting investment within sectors with the highest employment elasticity can maximise the job-creating capacity of the economy. India is in dire need of such novel ways to resolve its most challenging facets of the economy.

The article was published with Outlook India, Millennium Post and Business Standard on June 15, 2019.