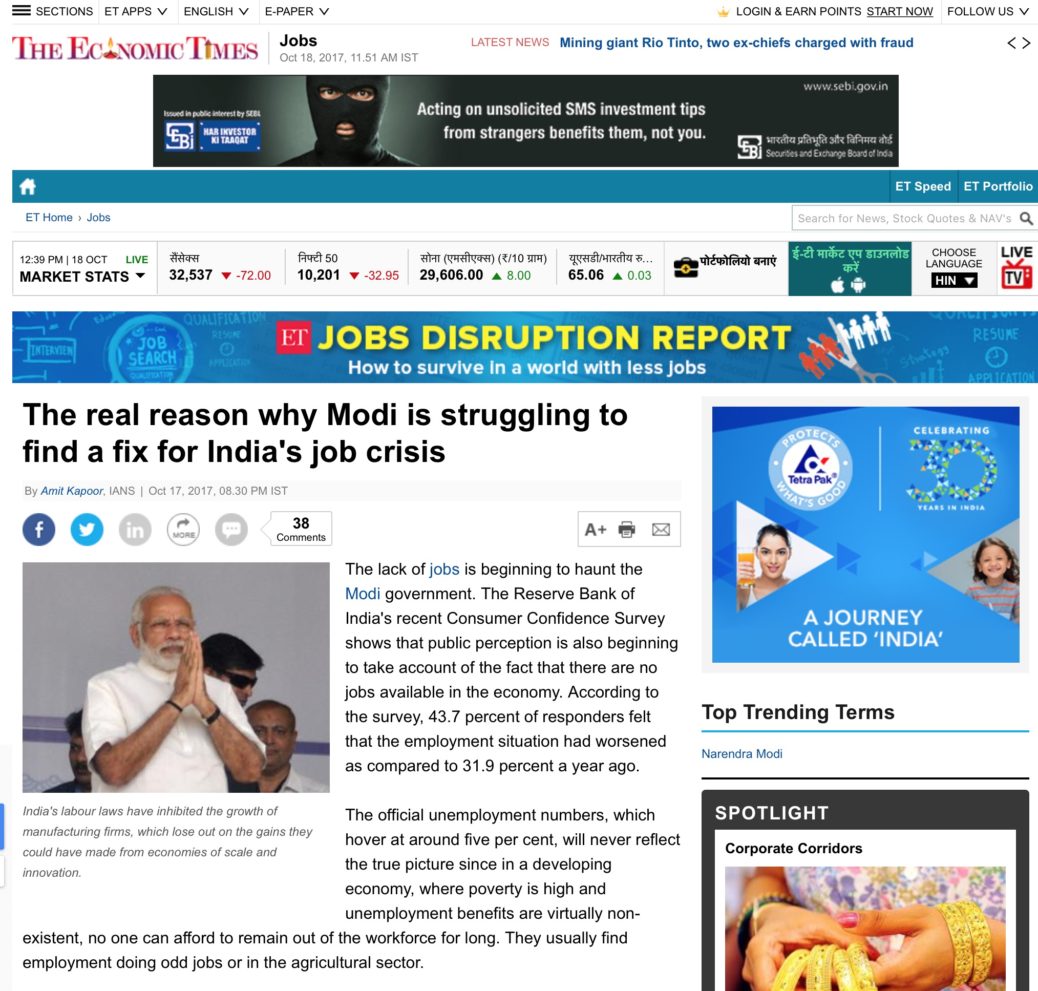 The problem of jobs is beginning to haunt the Modi government at concerning levels. The recently published Consumer Confidence Survey by the RBI shows that public perception is also beginning to take account of the fact that there are no jobs in economy. According to the survey, 43.7 percent of responders felt that the employment situation had worsened in the country as compared to 31.9 percent a year ago.

The official unemployment numbers, which hover at around 5 percent, will never reflect the true picture since in a developing economy where poverty is high and unemployment benefits are virtually non-existent, no one can afford to remain out of the workforce for long. They usually find employment doing odd jobs or in the agricultural sector.However, job creation numbers do give a clearer picture. According to the Labour Bureau, the Indian economy was generating around 9 lakh jobs in 2010 and 2011. Since then, the jobs created in the economy have consistently fallen reaching around 1.35 lakh in 2015 as opposed to the need for an annual generation of over 11 lakh jobs. The situation has not improved since.

However, this is not a recent phenomenon. The Indian economy has never been good at creating jobs. As per popular estimates including that of the RBI, India’s employment elasticity, which is a measure of the percentage in employment for a 1 percent change in economic growth, has been around 0.2 in the post reform period. This implies that as the real GDP rises by 10 percent, employment will merely rise by 2 percent. To put things in perspective, ILO estimates Brazil’s employment elasticity to be an impressive 0.9.

This long-term trend shows that there is a structural reason behind this problem. When an economy transitions from agricultural-led to a modern one, it undergoes three key transformations: movement of labour out of agriculture into industry and then services, shift of workers from informal into the formal sector and finally a rapid pace of urbanisation as more industries are set up in the rural areas around cities. India has missed the bus on all three of these fronts. Industrial development never took place in India and the economy became service-led right away. Employment in industry and services remains predominantly informal. Consequently, the pace of urbanisation has slowed in India.

Moreover, whatever industrial development has taken place in India has been either capital-intensive or skilled-labour-intensive. India’s labour-capital ratio in a vast majority of industries has been lower than other countries at similar levels of development. The very opposite is needed for job creation in a developing economy. But why has the pace of development been so skewed for India? What is so different about India that made it deviate from the historical trend of structural transformation for economies around the world?

India’s notoriously rigid labour laws are the leading cause behind these anomalies. Labour falls under the concurrent list of the Indian Constitutions, which implies that both the centreand the state can form laws on it and neither has been miserly about it. When combined, each state ends up having over 200 different labour laws. These labour laws disincentivise firms from growing beyond a point. For instance, the 1926 Trade Unions Act requires firms with seven or more workers to form trade unions. The 1948 Factories Act mandates manufacturing units with ten or more workers to have several working hour limits and work place conditionalities that become stricter with more workers.
The most burdensome of all is the 1947 Industrial Disputes Act (IDA), which covers all industrial disputes and makes it almost impossible for firms with 100 or more workers to fire anyone. Establishments under the regulation require permission from the labour department to lay anyone off and such permissions are rarely given even if the firm is unprofitable. Therefore, firms with six or less employees have the most labour flexibility.

As firm expansion comes with such high legislative costs in India, it is rational for them to remain small. This is why 84 percent of manufacturing employment is restricted to Micro and Small enterprises in stark contrast with other developing countries (46% for S. Korea and Thailand, 27% for Malaysia and 25% for China). India’s labour laws have inhibited the growth of manufacturing firms losing out on the gains they could have made from economies of scale and innovation. Due to these reasons India has not been able to undergo industrial development and is finding it difficult to gain from the rise in labour costs in China. India could have been the next manufacturing hub after China but since there is a sheer lack of capability, countries like Bangladesh and Vietnamhave been thriving in labour-intensive sectors like textile.

Labour reforms are, therefore, the antidote to India’s perpetual job crisis but it is politically sensitive topic. The Modi government is in a unique position of being capable enough of pushing through such bold reforms since it has the numbers needed for it. However, considering how most of its attempts at reform have backfired, this will be the farthest thing on the government’s mind. A piecemeal attempt at labour reform with the Small Factories Bill, which aims to exempt factories with 40 workers from 14 labour laws, has been in limbo forthe last two years.

However, on a positive note, some state governments are beginning to allow larger firms to retrench workers without seeking permission with their own amendments to IDA. Hopefully, all will be not too late till India manages to extricate itself out of this mess of its own creation.

The article was published with Economic Times on October 17, 2017.