Government should wake up to scourge of illegal LEDs 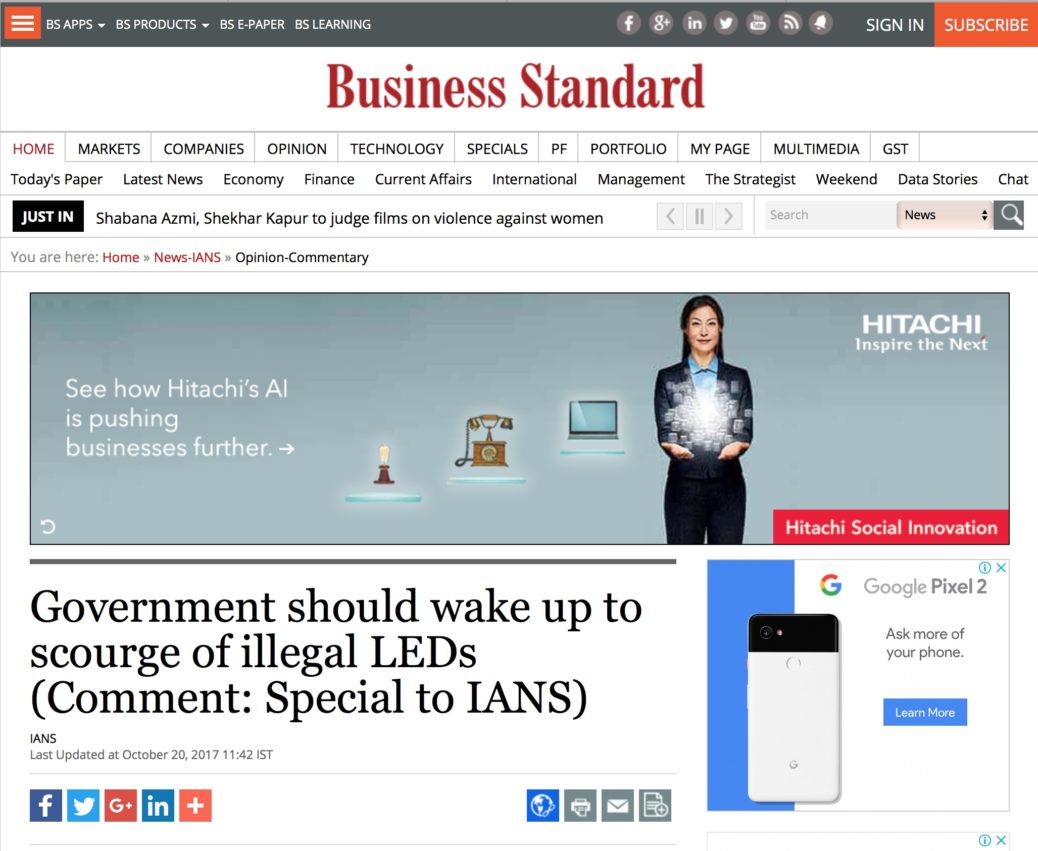 Government should wake up to scourge of illegal LEDs

The Indian LED lighting industry is going through a boom phase. According to some estimates, the market has grown at a compound annual growth rate (CAGR) of 17.5 per cent between 2009 and 2016 and is now worth around $3.7 billion (with LEDs at around 40 per cent of the market share). This makes the industry worth much more than the total GDP of over two dozen countries around the world.

The Modi government’s Unnat Jeevan by Affordable LEDs and Appliances for All (UJALA) programme, the world’s largest non-subsidised LED bulb distribution scheme, has given the industry an added push. Over 250 million LED bulbs have been successfully distributed under the programme. The eventual target is to replace 770 million incandescent bulbs across India with LEDs. Such a humongous production target opens up prospects of great employment opportunities and exponential growth within the industry.However, the situation is not so straightforward. Market distortions due to corruption and illegal activities have always been a bane for India and the lighting industry is no exception. According to a recent study by ELCOMA, the manufacturers’ umbrella body, across three Indian metropolitan cities, 54 per cent of LED brands and 63 per cent of downlighter brands are non-compliant with industry regulations (carrying the name and address of the manufacturer on the product). This makes more than half the lighting market illegal in its operations and out of the purview of tax authorities in these cities. The situation can only be worse in smaller cities. Moreover, about 80 per cent and 77 per cent of LED and downlighter manufacturers were found to be non-compliant of BIS safety regulations. This puts the consumers of these goods at risk.

Such disproportionately high levels of illegal operations diminish the gains that the economy can make from a thriving manufacturing industry. First are the employment losses that are generated as a result of these illegal manufacturers. Such operators either illegally import finished products from China or merely assemble imported parts in India — reducing any requirement for labour within the country.

Second, since the illegal market evades taxes by definition, it results in a huge loss for the national exchequer. When more than half the market is unaccounted for, a $4 billion industry can be said to amount to at least twice that number. With a GST of 12 percent on LEDs, the loss in revenue should sum up to approximately $0.5 billion. Finally, by not complying with safety standards, these operators put at risk quite a few consumers, most of whom are at the bottom of the pyramid.

Apart from these inimical effects on the economy, such illegal operations tend to distort the pricing of the market as well. Since this segment of the market does not have to incur the cost of compliance or pay any taxes, their costs of operation are lower than the rest of the market. Due to these reasons, products manufactured through the legal route have a price mark-up of about four times in the LED market. Therefore, unless the consumer is brand and safety conscious, the illegal market keeps capturing a higher market share. This creates a vicious self-fulfilling cycle for the expansion of tax-avoiding manufacturers which disincentivises compliance.

The lighting industry is not a unique case in India. A parallel illegal market exists for virtually all products in the country and this is mostly true for all economies. However, the magnitude and size of the parallel market in the lighting industry is alarming. The elimination of these activities and expansion of organised manufacturing is crucial for achievement of higher levels of development for the economy. Jobs, revenue and safety all hang in balance due to the existence of such illegal markets. Cracking down on the problem can also go a long way in remedying the job problem that is currently ailing the economy and provide the government with higher tax revenues which can be used for productive investments.

These markets can only be eliminated if the cost of evasion is pushed upwards. Therefore, stricter enforcement of compliance regulations and safety norms is needed on an urgent basis. Regular raids also need to be conducted by tax authorities in these trading and assembling units. However, all of these measures can only arise after a recognition of the existence of a problem by the authorities concerned. Without such a recognition, even if God says “Let there be light”, there will only be sub-standard LEDs and no jobs.

The article was published with Business Standard and Yahoo News on October 20, 2017.