A preferential route: Effectiveness of FTAs in Indian exports 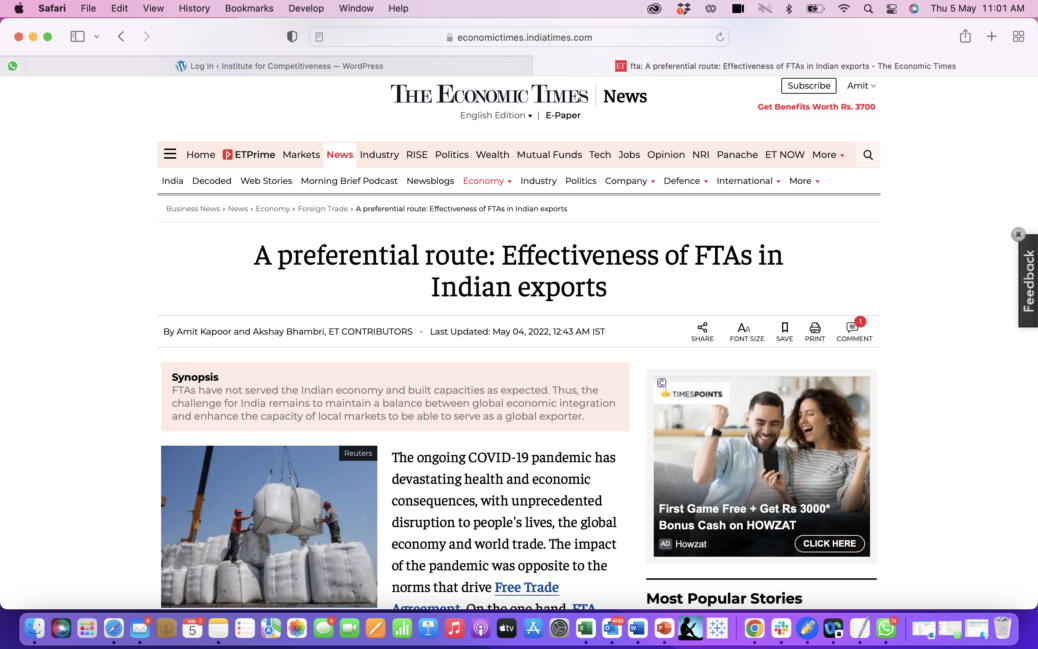 The ongoing COVID-19 pandemic has devastating health and economic consequences, with unprecedented disruption to people’s lives, the global economy and world trade. The impact of the pandemic was opposite to the norms that drive Free Trade Agreement. On the one hand, FTA works on the principles of open and integrated economies and the other hand, the pandemic has influenced nations to close their boundaries strictly. Despite this, with the changing global landscape as a ramification of the ongoing pandemic, FTA remains a vital tool to facilitate and revamp global trade. This presents an opportunity for India to make the Indian economy export-oriented through the active bilateral and multilateral FTAs and RTAs. Recently, the Government of India has signed the Comprehensive Economic Partnership Agreement (CEPA) with UAE and Australia-India Economic Cooperation and Trade Agreement aiming to give a push to bilateral trade and increase exports in the coming years. Moreover, India has shown enthusiasm and actively negotiating FTA deals with countries such as Canada, Israel, the United Kingdom and European Union. FTAs are generally agreements that often include clauses on trade facilitation and rule-making in investment, intellectual property, government procurement, technical standards and sanitary and phytosanitary issues and provide a possibility for countries to enhance trade and exports, access to new markets, trade risk diversification, enhancing innovation and competition, better integration of markets and facilitating the transfer of skills and technology. However, the feasibility of the FTAs for India’s bilateral trade and exports still remains uncertain.

India has seen some notable positives from the FTAs in the recent past as data shows a significant increase in the exports to some of the countries. According to data provided by the Directorate General of Commercial Intelligence and Statistics, India’s merchandise exports to countries/regions with which India shares trade agreements such as FTAs have registered a growth of 20.75% in the last five years. Additionally, India’s export to ASEAN has witnessed an increase from $25.13 billion in 2015-16 to $31.49 billion in 2020-21. The same trend follows with other countries/regions as well, whereas India’s export to SAFTA countries has increased from $18.60 billion in 2015-16 to $22.08 billion in 2020-21 and export to South Korea has increased from $3.52 in 2015-16 to $4.68 billion in 2020-21. More importantly, data provided by the Department for Promotion of Industry and Internal Trade suggest that cumulative investment received from the countries India shares FTAs in the last five years is to the tune of $89.46 billion.

One of the areas of concern for India remains the negative balance of trade with countries such as ASEAN and Japan despite the increase in exports. India has accounted for a trade deficit of $15.95 billion in 2020-21 with ASEAN countries. At the same time, the trade deficit with Japan remained $6.49 billion in 20-21. In contrast, India has achieved a rise in exports to the USA and China despite not having any FTAs with both countries. The increase in export is part of India’s increasing focus on making an export-driven economy as India achieved the highest ever exports of 37 billion US dollars in December 2021, which is 37% higher than December 2020. More importantly, India saw a slight improvement in the trade deficit with China from $52.67 billion in 2015-16 to $44.02 billion in 2020-21, despite not having any FTA with China. Thus, the data reflects that even though FTAs/RTAs give better access to new markets and facilitate exports, there is an urgent need of addressing the key issues such as reducing the trade deficit to make these FTAs/RTAs more effective.

In the past India has raised several issues regarding FTAs and their implications on the local markets. Many of these issues were flagged during India’s negotiations and then finally opting out of Regional Comprehensive Economic Partnership (RCEP). One of the major concerns highlighted by the Government of India is the impact of FTAs on local supply chains. Moreover, as data suggests, FTAs have not served the Indian economy and built capacities as expected. Thus, the challenge for India remains to maintain a balance between global economic integration and enhance the capacity of local markets to be able to serve as a global exporter. Furthermore, through FTAs with countries such as Australia and UAE, India aims to improve the balance of trade between the countries. Hence, significant steps have been taken by the Government of India to tame the shortcoming that India has faced regarding FTAs in the past. Nevertheless, as data indicates that FTAs are no panacea to all ills to economies and trade. Thus, by bringing notable changes to overcome the limitations of FTAs and by making them adaptable to an economy like India, these agreements can become a robust solution to the economic challenges that India and the world are facing.

The article was published with Economic Times on May 4, 2022.