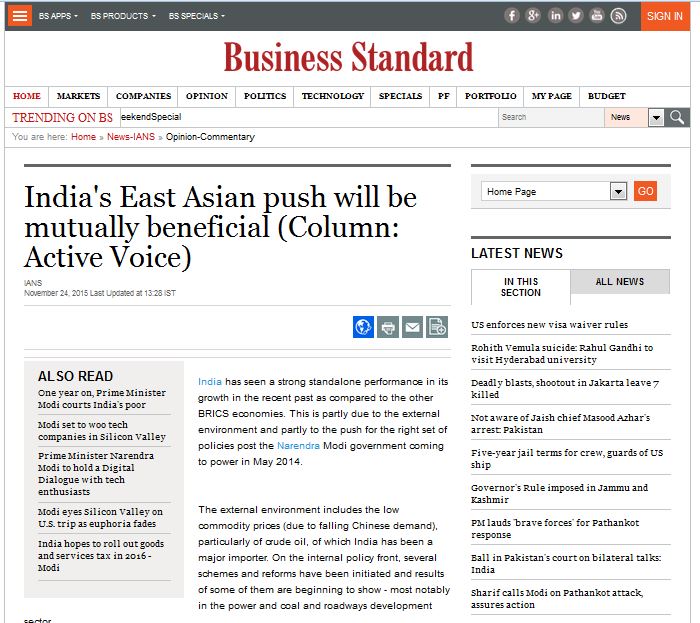 India has seen a strong standalone performance in its growth in the recent past as compared to the other BRICS economies. This is partly due to the external environment and partly to the push for the right set of policies post the Narendra Modi government coming to power in May 2014.

The external environment includes the low commodity prices (due to falling Chinese demand), particularly of crude oil, of which India has been a major importer. On the internal policy front, several schemes and reforms have been initiated and results of some of them are beginning to show – most notably in the power and coal and roadways development sector.

Modi has tried to pursue on India’s external front what many observers regard as ‘economic diplomacy’. It includes, among other things, drawing investments for economic growth. In the process, what is required is improving trade ties and deepening economic relationship with other economies. Also required is wooing investors and the diaspora, which are a major source of Foreign Direct Investment (FDI) flows and remittance flows to the Indian economy. However, all of this will function in the long-term only when there is trust and a continual push for reforms (either legislative or through directives) by the government and implementation on the ground.

India has already made considerable progress in attracting investors and emphasizing strong people-to-people contact with several countries. However, to keep the interest alive, it must focus on long-term implementation challenges and improvements in its capability to deliver.

A recent Peterson Institute for International Economics (PIIE) briefing report by C. Fred Bergsten rightly points to India’s improved chances for trade-led growth, particularly by focusing on benefiting from the emerging international architecture on trade led growth and economic development. It is because several countries’ experience in the past especially Japan, South Korea, Singapore (from 1960’s onwards) and most recently China post 1980s indicates that economic growth is possible by being in the global value chains of goods and services.

India’s experience in this regard has been mixed. It has done well in some sectors like IT, automobiles and pharmaceuticals, among others. India must try to be part of bilateral and multilateral trading initiatives. This is because it will help India in access to markets and reduce the diversionary trade impacts that may be seen in case India is out of the global trading architecture and global value chains. Modi’s visits to Malaysia and Singapore must be seen against this backdrop of the need for India to engage more openly with the world but at the same time keeping its strategic and national interests in mind.

From India’s point of view, another reason to ‘Act East’ now is that these economies share close cultural and historical links with us, apart from having a long experience of trade-led development and economic growth. These countries can and are willing to help India in leveraging their expertise on smart urbanization and economic development. These are steps in the right direction for India to take learning and experience of societies that have been successful in addressing crucial problems of their times and fostering peace and prosperity.

Overall, India seems to be heading in the right direction and with leadership at the topmost levels realizing the need for greater cooperation and action-oriented steps for its implementation. By cooperation and sharing of experience and resources at the international level, India along with the other countries in Southeast Asia, Central Asia, Russia, China and Japan can certainly hope to make the coming century as a truly Asian one.

Published with Business Standard on November 24, 2015.