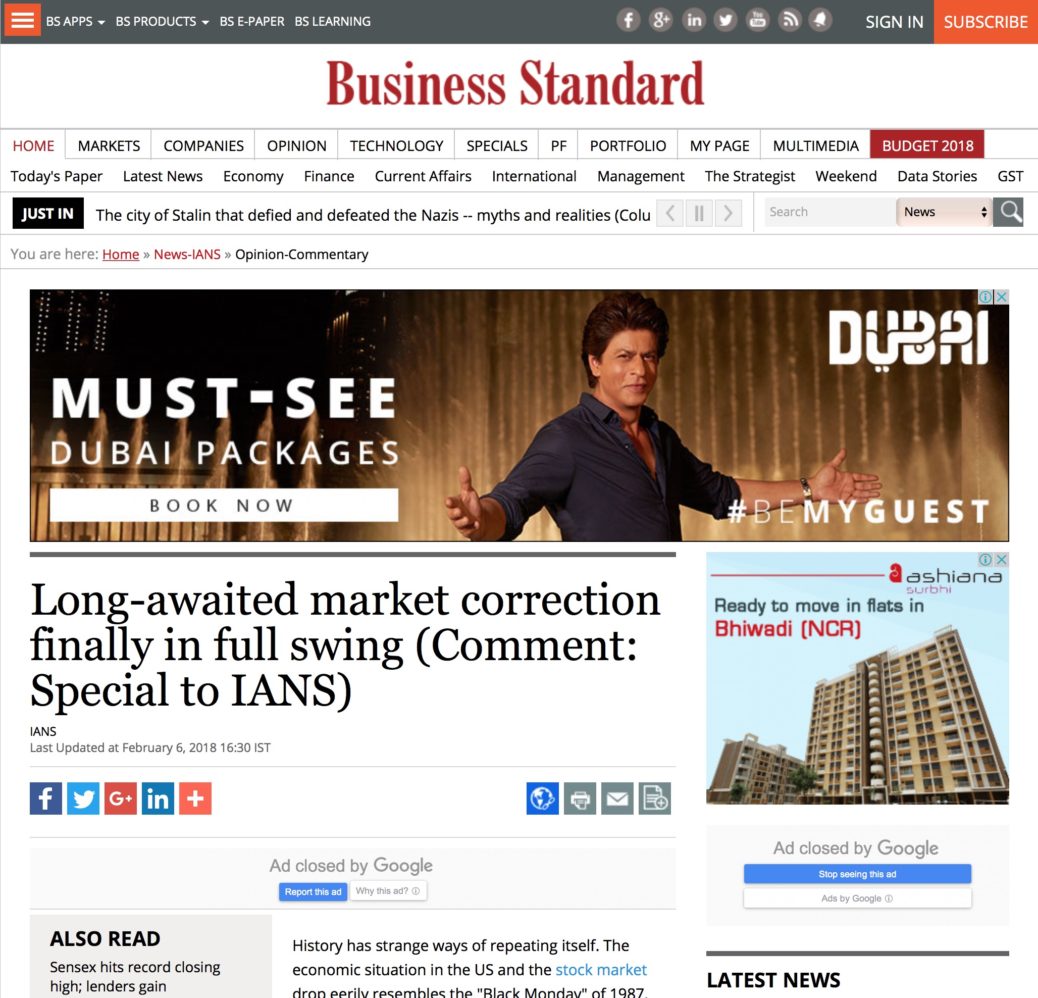 History has strange ways of repeating itself. The economic situation in the US and the stock market drop eerily resembles the “Black Monday” of 1987.

During that fateful year, US unemployment had bottomed out, the stock markets had been on an elongated bull run and unmistakable signs of inflation had begun to appear. A Republican President, Ronald Reagan, had recently replaced the Fed chief on no other grounds except that of Paul Volcker being a Democrat who was not enthusiastic about the President’s deregulation drive.

Two weeks after the replacement on Monday, October 19, 1987, Wall Street crashed along with the world markets due to massive sell-offs. There were no immediate catalysts for the crash.

The parallels are uncanny. President Donald Trump replaced Janet Yellen for the same reasons in a similar economic scenario. Last week’s reports showed that US unemployment is at the lowest levels in 17 years and wages are rising at the highest rate in eight years. Moreover, Trump introduced tax cuts in December, leaving more disposable income in the hands of Americans.

Riding on these factors, the Fed warned on Friday that inflation was expected to go up this year. Even though it did not raise interest rates, it was enough to trigger the worst intra-day points decline in Wall Street history on Monday. World markets were not far behind on the trend. Asian and Australian markets saw themselves correct by more than 3 percent. In India, the Sensex fell by more than 1,200 points but recovered later in the day.

The dramatic drop in the stock markets was long coming. The quantitative easing policies of the developed world in response to the 2008 crisis had reduced interest rates and pumped excess liquidity into the world markets. This money had found its way into financial assets that had bloated in value with time.

Therefore, in spite of any significant upticks in corporate balance sheets, the stock markets sustained an upward trend. Now that global economies had finally started to show signs of economic revival, the interest rates were bound to be raised by central banks across the developed world. Stock markets would have to bear the brunt of the process.

In India, a few domestic factors like demonetisation had also driven domestic wealth towards the stock markets. According to Reserve Bank of India (RBI) data, household investment in shares had averaged around Rs 226 billion ($3.5 billion) between 2000-01 and 2015-16 and peaked at Rs 743 billion just before the 2008 economic crisis. On the contrary, in 2016-17, it jumped to a historical high of Rs 1,825 billion. This has been a concerning trend which even the Economic Survey highlighted last week.

The Economic Survey had pointed out that between December 2015 and January 2018, the S&P 500 had risen 45 per cent while the Sensex had risen 52 per cent.

This had led to a convergence of the price to earnings ratios of the two markets at a lofty level of about 26 per cent. This convergence in stock markets came about despite contrasting economic scenarios of the two countries where India was on a slow growth path while the US economy was growing strongly. Only positive future expectations of corporate growth could explain the trend.

So, how long will the market correction last? The Sensex still had a PE ratio of 24.51 on Monday which gives an earnings yield of 4.07 percent (1/24.51). Meanwhile, India’s 10-year bond yield stands at 7.53 percent. It is quite counter-intuitive that equities, which are risky assets, are providing lower yields than risk-free government bonds. This queer disparity between Indian stock and bond yields has been true for quite some time and shows that equities have been overvalued. The shift away from equities was, thus, inevitable and makes accounting sense.

This also points to the possibility that the correction will continue to take place until equity returns balance out with bond yields. Considering the fact that the former is a riskier asset class, return on equities generally tend to be higher. The trend had only been reversed due to the sudden inflow of domestic liquidity cited above. So, PE ratios have to drastically fall for bonds and equities to be equally attractive. That should imply a sustained downward trend in the stock markets.

Moreover, the RBI is expected to adopt a hawkish tone in its meet on Wednesday. Rising oil costs and the Budget’s inflationary outcomes in the future might result in a possible signalling of future hikes in interest rates by the central bank. This will further the bearish sentiment of the stock markets in the near future.

Therefore, the long-awaited market correction is finally in full swing. This will bring about a welcome portfolio shift from growth-based to value-based investments. The only thing that can make matters worse is if the new investors that the equity markets have attracted lose their appetite and indulge in panic selling.

The unidirectional investment in equities since demonetisation had always had the downside of putting all the eggs in one basket. However, frenzied sell-off must be strictly avoided as the current drop is merely a market correction that had been long expected. The rational move would be to wait out the drop and invest in value-based stocks when prices have bottomed out.

The article was published with Business Standard, sify.com, BTVi.in, on February 6, 2018.