States can Harness Their Population to Grow 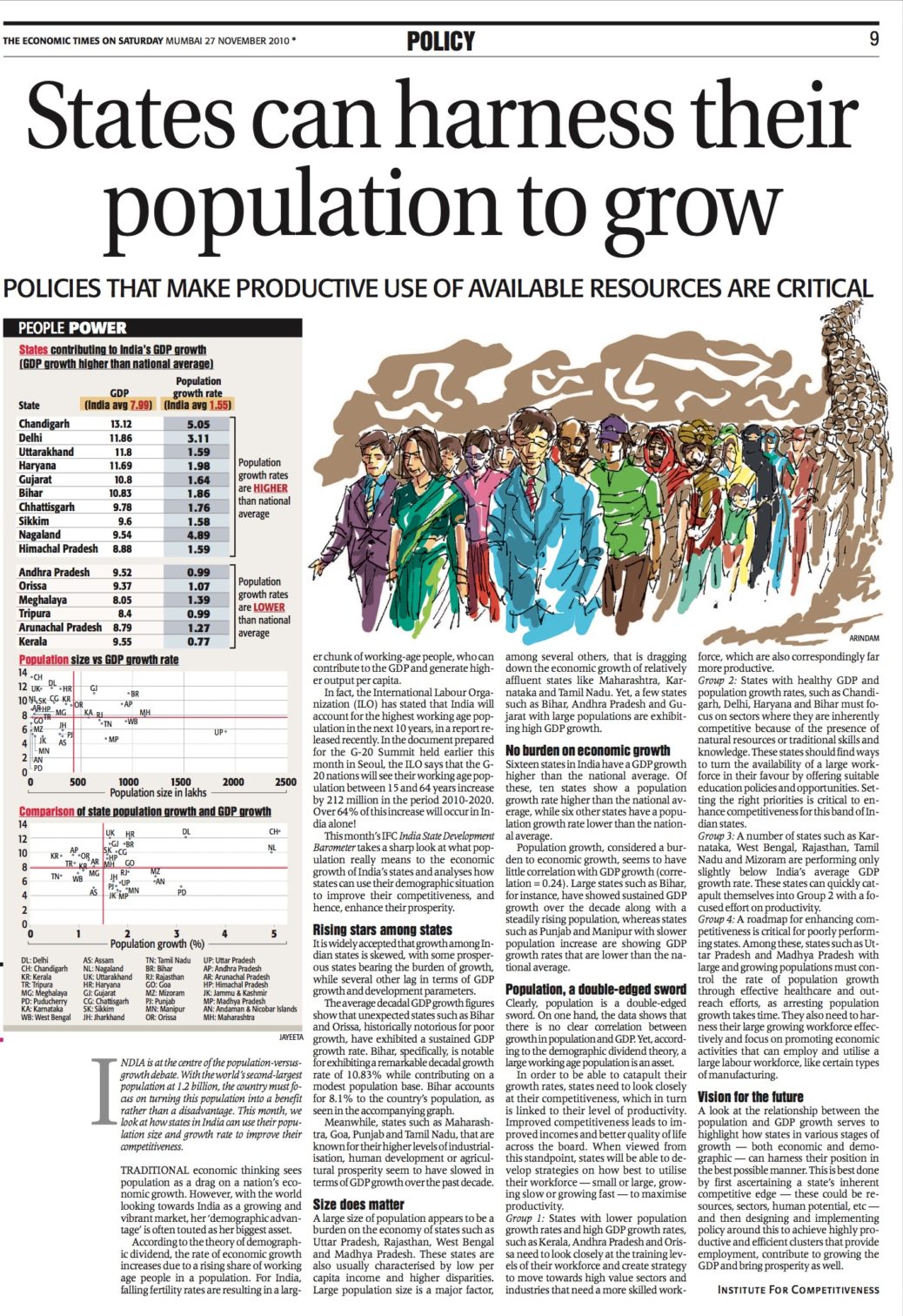 India is at the centre of the population-versusgrowth debate. With the world’s second-largest population at 1.2 billion, the country must focus on turning this population into a benefit rather than a disadvantage. This month, we look at how states in India can use their population size and growth rate to improve their competitiveness. TRADITIONAL economic thinking sees population as a drag on a nation’s economic growth. However, with the world looking towards India as a growing and vibrant market, her ‘demographic advantage’ is often touted as her biggest asset.

According to the theory of demographic dividend, the rate of economic growth increases due to a rising share of working age people in a population. For India, falling fertility rates are resulting in a larger chunk of working-age people, who can contribute to the GDP and generate higher output per capita.

In fact, the International Labour Organization (ILO) has stated that India will account for the highest working age population in the next 10 years, in a report released recently. In the document prepared for the G-20 Summit held earlier this month in Seoul, the ILO says that the G-20 nations will see their working age population between 15 and 64 years increase by 212 million in the period 2010-2020 . Over 64% of this increase will occur in India alone!

This month’s IFCIndia State Development Barometer takes a sharp look at what population really means to the economic growth of India’s states and analyses how states can use their demographic situation to improve their competitiveness, and hence, enhance their prosperity.

It is widely accepted that growth among Indian states is skewed, with some prosperous states bearing the burden of growth, while several other lag in terms of GDP growth and development parameters.

The average decadal GDP growth figures show that unexpected states such as Bihar and Orissa, historically notorious for poor growth, have exhibited a sustained GDP growth rate. Bihar, specifically, is notable for exhibiting a remarkable decadal growth rate of 10.83% while contributing on a modest population base. Bihar accounts for 8.1% to the country’s population, as seen in the accompanying graph.

Meanwhile, states such as Maharashtra , Goa, Punjab and Tamil Nadu, that are known for their higher levels of industrialisation, human development or agricultural prosperity seem to have slowed in terms of GDP growth over the past decade.

A large size of population appears to be a burden on the economy of states such as Uttar Pradesh, Rajasthan, West Bengal and Madhya Pradesh. These states are also usually characterised by low per capita income and higher disparities. Large population size is a major factor, among several others, that is dragging down the economic growth of relatively affluent states like Maharashtra, Karnataka and Tamil Nadu. Yet, a few states such as Bihar, Andhra Pradesh and Gujarat with large populations are exhibiting high GDP growth.

No burden on economic growth

Population growth, considered a burden to economic growth, seems to have little correlation with GDP growth (correlation = 0.24). Large states such as Bihar, for instance, have showed sustained GDP growth over the decade along with a steadily rising population, whereas states such as Punjab and Manipur with slower population increase are showing GDP growth rates that are lower than the national average.

Clearly, population is a double-edged sword. On one hand, the data shows that there is no clear correlation between growth in population and GDP. Yet, according to the demographic dividend theory, a large working age population is an asset.

In order to be able to catapult their growth rates, states need to look closely at their competitiveness, which in turn is linked to their level of productivity. Improved competitiveness leads to improved incomes and better quality of life across the board. When viewed from this standpoint, states will be able to develop strategies on how best to utilise their workforce — small or large, growing slow or growing fast — to maximise productivity.

Group 1: States with lower population growth rates and high GDP growth rates, such as Kerala, Andhra Pradesh and Orissa need to look closely at the training levels of their workforce and create strategy to move towards high value sectors and industries that need a more skilled workforce , which are also correspondingly far more productive. Group 2: States with healthy GDP and population growth rates, such as Chandigarh , Delhi, Haryana and Bihar must focus on sectors where they are inherently competitive because of the presence of natural resources or traditional skills and knowledge.

These states should find ways to turn the availability of a large workforce in their favour by offering suitable education policies and opportunities. Setting the right priorities is critical to enhance competitiveness for this band of Indian states. Group 3: A number of states such as Karnataka , West Bengal, Rajasthan, Tamil Nadu and Mizoram are performing only slightly below India’s average GDP growth rate.

These states can quickly catapult themselves into Group 2 with a focused effort on productivity. Group 4: A roadmap for enhancing competitiveness is critical for poorly performing states. Among these, states such as Uttar Pradesh and Madhya Pradesh with large and growing populations must control the rate of population growth through effective healthcare and outreach efforts, as arresting population growth takes time. They also need to harness their large growing workforce effectively and focus on promoting economic activities that can employ and utilise a large labour workforce, like certain types of manufacturing.

Vision for the future

A look at the relationship between the population and GDP growth serves to highlight how states in various stages of growth — both economic and demographic — can harness their position in the best possible manner. This is best done by first ascertaining a state’s inherent competitive edge — these could be resources , sectors, human potential, etc — and then designing and implementing policy around this to achieve highly productive and efficient clusters that provide employment, contribute to growing the GDP and bring prosperity as well.

The article was published with Economic Times on November 27,2010.