What India can Learn from China’s 70 Years of Economic Growth? 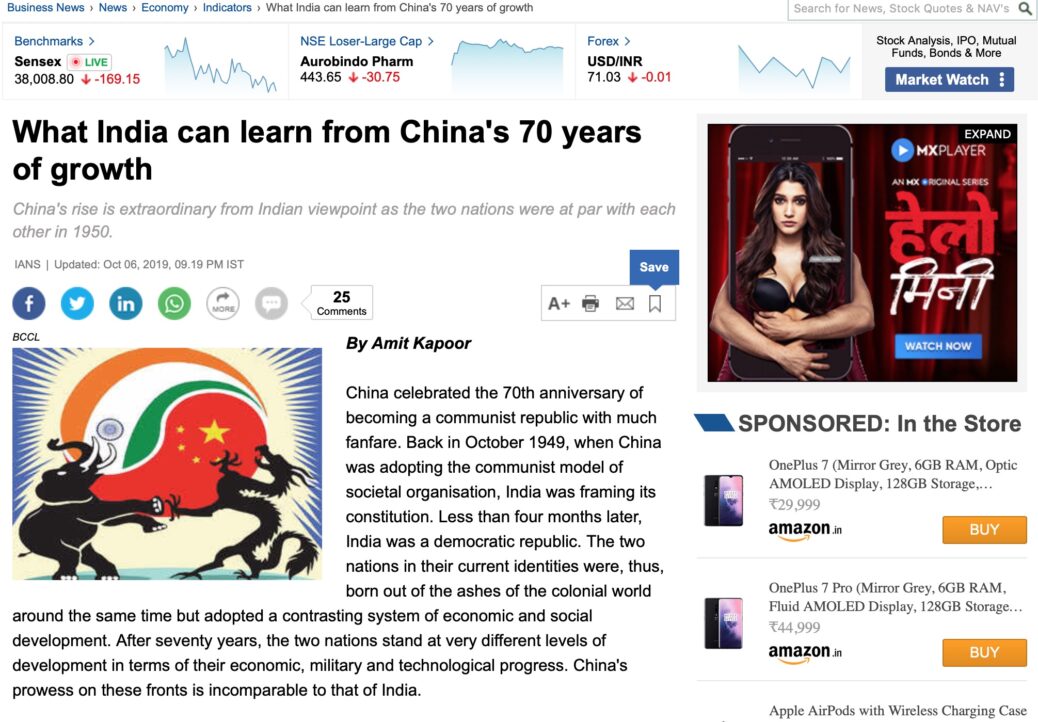 What India can Learn from China’s 70 Years of Economic Growth?

China celebrated the 70th anniversary of becoming a communist republic with much fanfare. Back in October 1949, when China was adopting the communist model of societal organisation, India was framing its constitution. Less than four months later, India was a democratic republic. The two nations in their current identities were, thus, born out of the ashes of the colonial world around the same time but adopted a contrasting system of economic and social development. After seventy years, the two nations stand at very different levels of development in terms of its economic, military and technological progress. China’s prowess on these fronts is incomparable to that of India.

Even as recently as 1978, the per capita GDP of China was $979, and India was $966. The excesses of Mao’s rule that culminated in the disastrous programmes of the Great Leap Forward and the Cultural Revolution kept economic progress of China subdued in the first three decades. However, all that changed with the coming of Deng Xiaoping in 1978. As a result, China’s per capita income today is about 4.6 times than that of India. Despite all the demerits of the authoritarian rule in China, the performance of the Chinese economy in just the last four decades is noteworthy and holds key lessons for India as well.

The first, and probably the most important, thing that China did well right from the start was its focus on human development. Even under Mao, China’s emphasis on education for all and the healthcare facilities provided by its communes helped the country perform well on human development. While the human development index (HDI) was introduced in 1990, its long run calculations have been provided by Nicholas Crafts. The HDI numbers for China and India are, thus, available for 1950 and 1973. While both the countries had almost similar HDI scores in 1950 (0.163 and 0.160 respectively), China’s score was markedly higher in 1973 (0.407 against India’s 0.289).

So, the improvement in human development poised the society perfectly for the reforms that would be imposed under Deng’s China. The development of a vast pool of human capital primed the economy for economic reforms and, therefore, allowed the country to maximise its gains form it. On the other hand, education and health have always been an area for concern for India. By the time India began undertaking economic reforms in the early 1980s, India’s health and education levels were still poor. An average Indian died at the age of 54 in 1980 while merely 43.6 percent of its population was literate. By comparison, life expectancy in China was 64 years and its literacy rate was 66 percent around the same time.

The second key difference was the focus on the type of industries by the two countries. China focussed on industries that were more labour-intensive leveraging on its pool of cheap labour. Industries like textile, light engineering and electronics received higher investment. China also introduced special economic zones (SEZs) as early as 1980, which pushed manufacturing growth and setting up of export-oriented industries. India, on the other hand, focused more on heavy industries that were capital-intensive and employed less labour. Moreover, the policy focus on attracting foreign investment through instruments like SEZ came much later. As a result, by 1998 China had FDI investments of $183 per capita as per Maddison estimates and India was merely at $14.

As India hardly pushed for labour-intensive manufacturing growth, the sector never picked up and the country became a services-led economy. China, on the other hand, became the manufacturing powerhouse of the world. A similar edge is being created by Bangladesh in recent times. The export-industries that are moving out of China due to rise in labour costs and the trade war with the United States are being effectively captured by countries like Bangladesh. The country has eclipsed India’s growth rate since 2017 and has become the fastest-growing country in South Asia. Most of its growth is being led by its manufacturing sector, which implies that the country will be able to create high employment for its citizens and improve their standard of living at a higher and more equitable rate than India; exactly what China has achieved over the last four decades.

Thus, India has a lot to learn from the development trajectories of its neighbours. The focus on health and education parameters for long-term growth and market-oriented policies in the short term has been an effective strategy for Asian countries. Perhaps it is time that India does the same.

The article was published with Economic Times on October 6, 2019