Creativity will drive India’s prosperity: Is anyone listening? 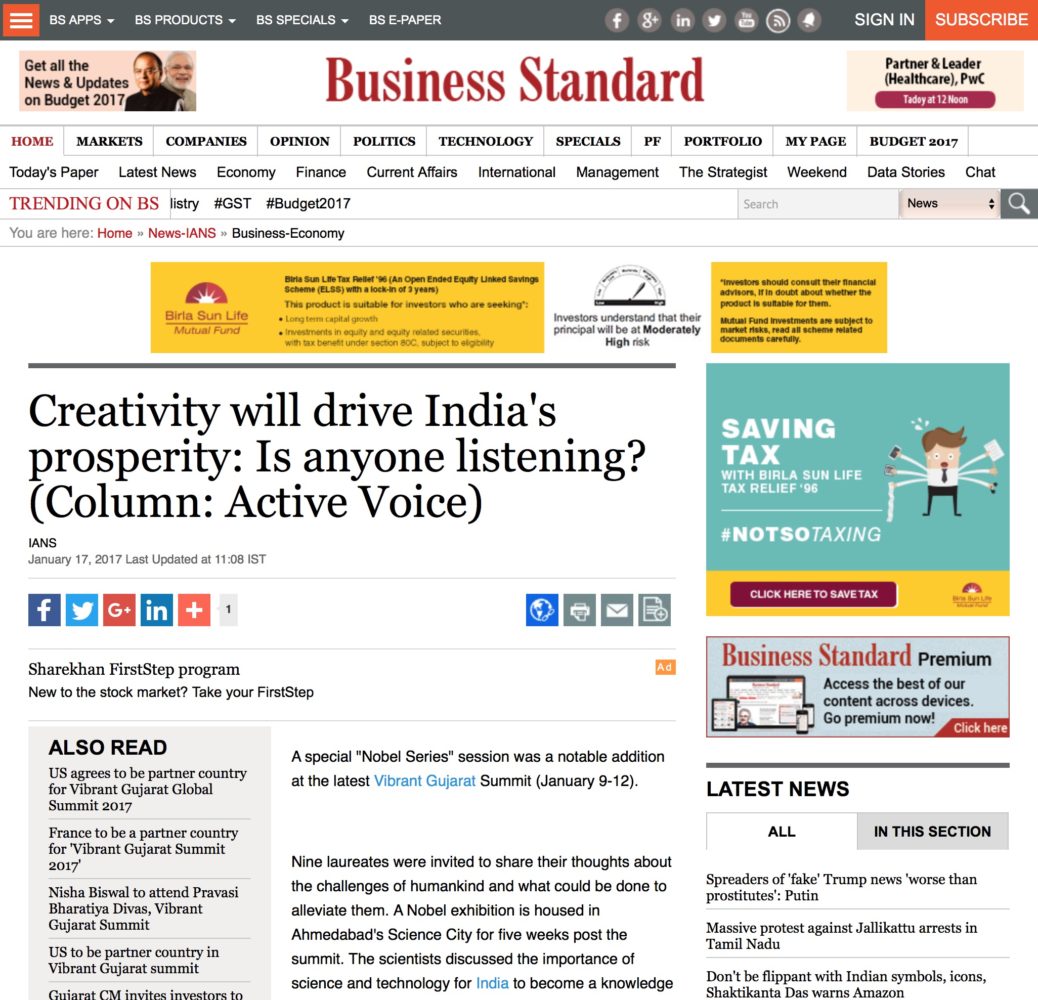 A special “Nobel Series” session was a notable addition at the latest Vibrant Gujarat Summit (January 9-12).

Nine laureates were invited to share their thoughts about the challenges of humankind and what could be done to alleviate them. A Nobel exhibition is housed in Ahmedabad’s Science City for five weeks post the summit. The scientists discussed the importance of science and technology for India to become a knowledge superpower. They also interacted with students and shared their research and general approach to science and technology.

While all this bodes well for the rise of Indian states in the global arena, what is important is that, of late, Indian states are recognising the need for not only inviting creative individuals but also trying to enable an ecosystem that helps people grow and make the best of every opportunity.

A question is: Why foster science and technology or even creativity? Many scholars, economists and public policy professionals have devoted considerable time on understanding the sources of a nation’s prosperity. Some of them opine that economic prosperity arises as a result of “institutions” while others argue that factors like endowments and geographic location are equally important. More recently, other scholars believe that productivity is the basis of economic growth and prosperity.

Recently, scholars like Richard Florida of the Martin Prosperity Institute (MPI) at the University of Toronto have pointed out that the rise of the “creative class” could help explain the prosperity and economic development in some parts and the lack of it in other parts of the world. “Creative class”, according to Florida, is a group of people engaged in creative occupations. These people, when given the right environment and ecosystem, enable innovation, which is the main driving force for economic development.

Urbanisation and the progress in technology over the past two/three centuries have meant that the flow of ideas and sharing of information can now be done much more quickly. This has led to the rise of the knowledge economy.

For tracking these developments, Florida and his MPI team have created a Global Creativity Index. The report is based on the 3T framework that forms the basis of economic progress within the city/state — Tolerance, Talent and Technology — that in turn leads to economic prosperity. If one looks at the most recent version of the Global Creativity Report 2015 one finds that most developed economies perform well — Australia is on top, followed by the US, while Singapore, the only Asian nation in the top 10, is at 9, followed by the Netherlands. Also the share of the creative class in many North American and West European countries is closer to 40 percent.

Contrast this with India’s performance — 99th in a list of 120+ nations — and there is scope for tremendous improvement. One of the reasons for this low performance is that the share of the creative class is quite low in India. This is due to an issue of quality education and skilling and outflow of people who receive good education. Less than five percent of the Indian workforce is formally skilled. The gross enrolment ratio is also quite low in India.

India is relatively good in the technology component but bad in the tolerance and talent domains. Even the BRICS as a block is not especially impressive with a diverse range of rankings. Brazil ranks the highest in the Creativity Index within the block at 29. Russia is outstandingly bad in the tolerance aspect.

The Institute for Competitiveness and Martin Prosperity Institute had previously tied up for research on India’s “Creative Class”. The research and ranking of the Creative Economy of Indian States was done recently.

The broad findings remain the same as last year. This year we have added a classification of Union Territories and separation from other states.

Delhi and Chandigarh retain rank 1 and 2, respectively, in the city-states/Union Territory category. Punjab moves to top spot this year from the previous years’ third position (in the main states index) pushing down Kerala and Goa. States like Bihar and Orissa are bad performers overall and but have tremendous opportunity to move up in the years to come.

The maximum negative variation is found in states like Himachal Pradesh, which has moved down six places. Haryana has seen an upward movement of seven places, thus showing significant improvement in performance. States that have moved up in the ranking include Gujarat and Karnataka. The rankings among the Union Territories remained unchanged from the last year.

In the years ahead, India’s economic prosperity will be driven by states and Union Territories and locations and cities within these that are creative. States that do well to foster the creative class will in turn be instrumental in driving innovation and economic progress.

Published with Business Standard on January 17, 2017.