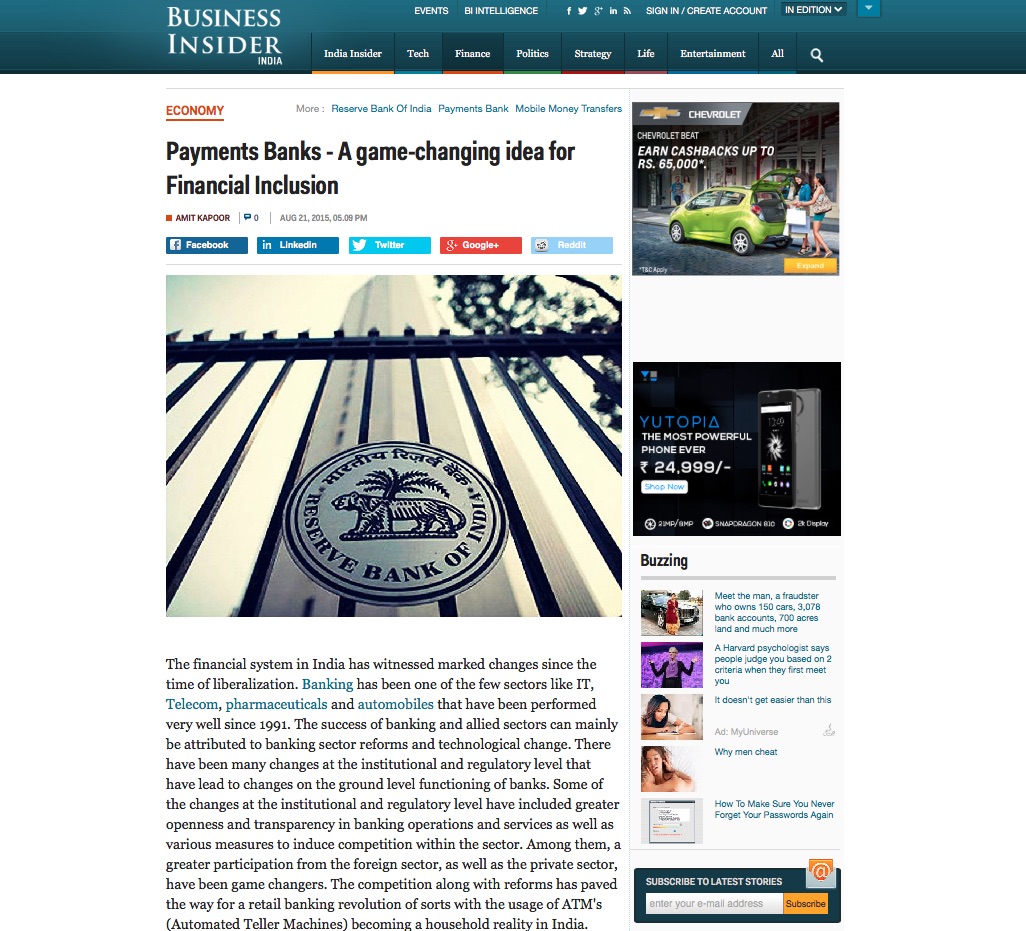 The financial system in India has witnessed marked changes since the time of liberalization. Banking has been one of the few sectors like IT,Telecom, pharmaceuticals and automobiles that have been performed very well since 1991. The success of banking and allied sectors can mainly be attributed to banking sector reforms and technological change. There have been many changes at the institutional and regulatory level that have lead to changes on the ground level functioning of banks. Some of the changes at the institutional and regulatory level have included greater openness and transparency in banking operations and services as well as various measures to induce competition within the sector. Among them, a greater participation from the foreign sector, as well as the private sector, have been game changers. The competition along with reforms has paved the way for a retail banking revolution of sorts with the usage of ATM’s (Automated Teller Machines) becoming a household reality in India.

The dream of a truly banked society has eluded India. Some of the poorest people live in India and have remained outside the formal banking ambit. The prime minister’s recent Jan Dhan Yojana has been aimed at greater financial inclusion. However opening and using the financial system for one’s benefit are two different things. Nevertheless, a beginning has been made for greater financial inclusion and it is a step in the right direction.

The Reserve Bank of India has similarly granted an ‘in-principle approval’ to eleven private parties for ‘payments banks’. These include nine organisations and two individuals. The nine organisations include, Aditya Birla Nuvo Limited, Airtel M Commerce Services Limited, Cholamandalam Distribution Services Limited, Department of Posts, Fino PayTech Limited, National Securities Depository Limited, Reliance Industries Limited, Tech Mahindra Limited and Vodafone m-pesa Limited. The two individuals include Dilip Shanghvi of Sun Pharmaceuticals and Vijay Shekhar Sharma of one communication which operates Paytm. These entities, which are required to have an initial capital of Rs. 100 crore each, will have to start operations within 18 months. The promoter’s minimum initial contribution to equity capital will have to be at least 40 percent for the first five years.

These new type of niche bank was proposed in the Nachiket Mor Committee Report on ‘Comprehensive Financial Services for Small Businesses and Low Income Households’. These are expected to be game changers for India expanding banking services. A payments bank will perform all the functions of a normal bank except lending. Thus, it will accept deposits, pay bills, accept cheques and drafts but will not lend. They can hold a balance of up to Rs. 1 lakh and can open and operate branches and ATM’s. The payment banks are expected to target India’s migrant labourers, low-income households and small businesses, offering savings accounts and remittance services with low transaction costs.

There are several benefits of payment banks that include last mile connectivity in rural areas where physical access is difficult. Similarly, costs of banking might fall with a greater range of services to consumers. Also, with greater mobile money transfers and payments the dream of a cashless society can be realized as well as leakages in the system will reduce. International experience shows that mobile money transactions and these financial innovations have been a very successful in countries like Kenya. These banks thus will add a much-needed financial inclusion dimension to the banking system. Over the next decade or so their functioning has the potential to bring about another revolution in the banking sector.

Published with Business Insider on August 21, 2015.