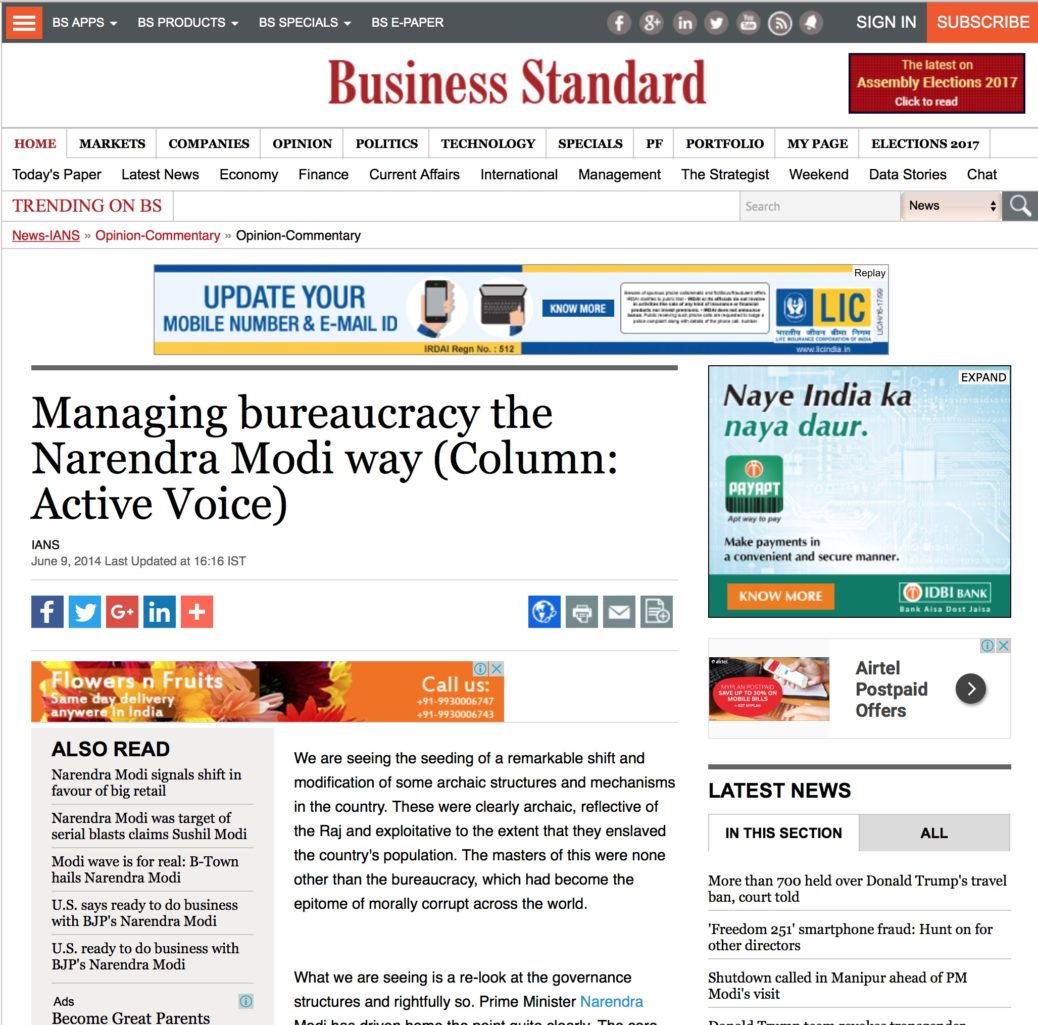 We are seeing the seeding of a remarkable shift and modification of some archaic structures and mechanisms in the country. The mechanism and procedures we followed were clearly archaic, reflection of the Raj and exploitative to the extent that they enslaved the population of this country. The masters of this were none other than the bureaucracy in this country that had become the epitome of morally corrupt across the world.

What we are seeing is relook at the Governance structures in the country and rightfully so. Prime Minister Narendra Modi has driven home a point quite clearly that has captured the imagination of the country. The core belief on which the PM is acting is that the work culture of the central government is archaic and to improve the state of the nation we need repealing of layers in decision-making that had been created. The layers if at all was a way of the bureaucracy to not function in a transparent way and create procedures to cover their tracks.

For me the bureaucracy has been a system that constricted the minds of the people, had a free run, were clearly arrogant, did not want to learn, use power given to them to settle scores, morally corrupt and reflected a pervert thought that would give them control over the masses. . They were a class of people who were having a free run wrecking lives of people. The less said about the great bureaucracy the better it is as they ended up becoming the masters of non-performance who had colluded to form cartel of the unfriendly.

I couldn’t have agreed more with Mohan Guruswamy who was recently quoted as saying “I hope he cracks down on the receiving of gifts too at Diwali and other festivals. They all have Mont Blanc pens, suit fabrics, cases of Glenfiddich whisky and golf clubs. We have a bureaucracy, which is undisciplined, corrupt and venal to its core. It’s about time it was shaken up”.

What matters today is that the country is seeing a point in time in history wherein the sowing of the seeds for dismantling this gargantuan structure has probably started. People across the world have stood up and taken notice of the change that is being seeded in the country.

The Prime Minister has set a process in motion that is clearly about managing the brute power and unprincipled behavior of neighborhood unfriendly man, the bureaucrat. Some of the significant steps taken are –

This is all great but I would like to raise a point on making the process more meaningful by confronting the non-performers and the jokers directly. I would like to present a portrait of three such bureaucrats, maybe jokers, who could be called an advisor, director and a joint secretary.

Director: The director would be a stooge of the joint secretary, with no understanding about the realm or sphere he operates in, with extremely limited knowledge though what drives him is his arrogance, which is reflected in his predisposition and behavior.

Advisor: A bureaucrat from the 80’s who is none too willing to make any meaningful contribution, a backstabber, a person with no character, one willing to just cover his tracks and not being able to stand by his own words

Joint Secretary: Arrogant, absolute lack of character, loves dogs (maybe Dalmatians), known history of substance abuse, disliked by colleagues, limited understanding of industry, believes he is a gift to mankind and nation by being in the job.

These three characters could be easily named though what matters is we need to weed out all such bureaucrats from the system. We need to make sure that they are not able to make the population suffer and create what I could call as “Martyrs of Bureaucracy”.

If the Prime Minister so desires he should create a commission to understand the carnages of such people (who don’t have any reason to be in Government and be part of the Governance mechanism).

To begin with I could strongly suggest that we need to get rid of such jokers in the system to build trust in bureaucracy. The trust in bureaucracy is important as they are the people who reflect the will of the Government and they are eventual custodians of Governance mechanism in the country. What matters today is an additional step to get rid of such people (clear weeding out) from service and do away with the constitutional privileges they enjoy. This could be the most important step in building up confidence in the bureaucracy, restoring faith in their functioning and building a people oriented system.

Published with Business Standard on June 9, 2014.