Why India’s position is justified in climate change talks 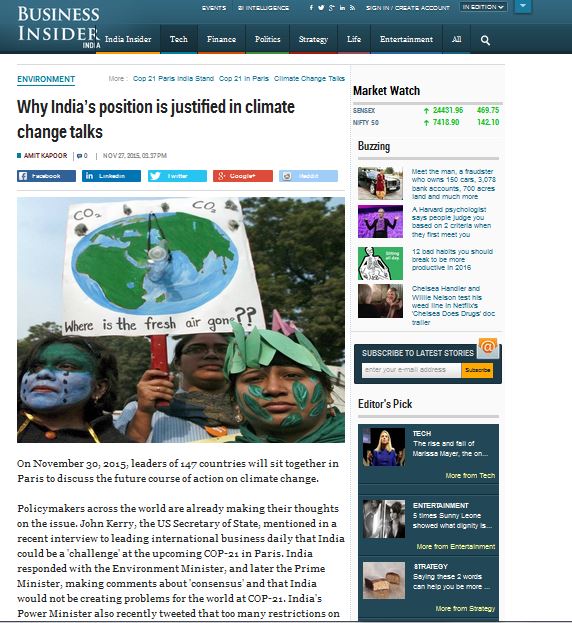 On November 30, 2015, leaders of 147 countries will sit together in Paris to discuss the future course of action on climate change.

Policymakers across the world are already making their thoughts on the issue. John Kerry, the US Secretary of State, mentioned in a recent interview to leading international business daily that India could be a ‘challenge’ at the upcoming COP-21 in Paris. India responded with the Environment Minister, and later the Prime Minister, making comments about ‘consensus’ and that India would not be creating problems for the world at COP-21. India’s Power Minister also recently tweeted that too many restrictions on the emissions cut will adversely impact India’s competitive strength. India’s stand on the issue so far has been quite unambiguous.

The reason has been that India sees itself on the right side of the pollution debate so far. According to India’s power minister, India’s contribution to the global emissions of carbon dioxide over the past 150 years is just close to 2.5 percent to 3 percent while for U.S, which is the worst polluter at a country level, it is close to 18 percent and for China it is close to 10 percent. For Europe, it is close to 18 percent. These statistics show that so far India has been pursuing a low carbon path to economic growth and development.

India, thus, has not been on the polluting side of the story for the past 150 years or so. It, therefore, talks about climate justice for its energy-poor people, some 300 million people in India who do not have access to electricity. India’s per capita emissions of Co2 in 2014 was 1.7 tons, which is puny when compared with China at 6.7 tons and US at 17 tons.

What India expects is fairness at the world level in dealing with the issue. India and PM Narendra Modi have made it clear that they do not want the submergence of small Island countries into the sea, as they see the world as an interconnected whole. True that India is wanting to double its coal generation from 550 million tonnes to close to 1 billion million tonnes over the next five years. But then also, India will nowhere be close to the US or even China as far as per capita Co2 emissions are concerned.

It is true that the problem cannot be held hostage to one countries’ rise. But at the same time, the world must strive collectively to reduce the energy poverty that India faces. The world, thus, must strive to provide a solution to the challenge of access that India’s energy-poor citizens face. India seems willing to be cooperative on the overall issue but committing on cuts could very easily undermine its own commitment to its people.

Thus, the world must collectively strive towards a solution that is practical, environmentally sustainable, and also equitable and just for all people of the world. The COP-21 could indeed be a game-changer for the future of climate change and the planet in the years ahead. Will it see a landmark agreement or a deadlock only time can tell? The leaders of all the nations must organize issues to tackle the problem effectively for the future generations who will inhabit the planet in the coming decades. The choice for the world leaders is not an easy one to make.

Published with Business Insider on November 29, 2015.