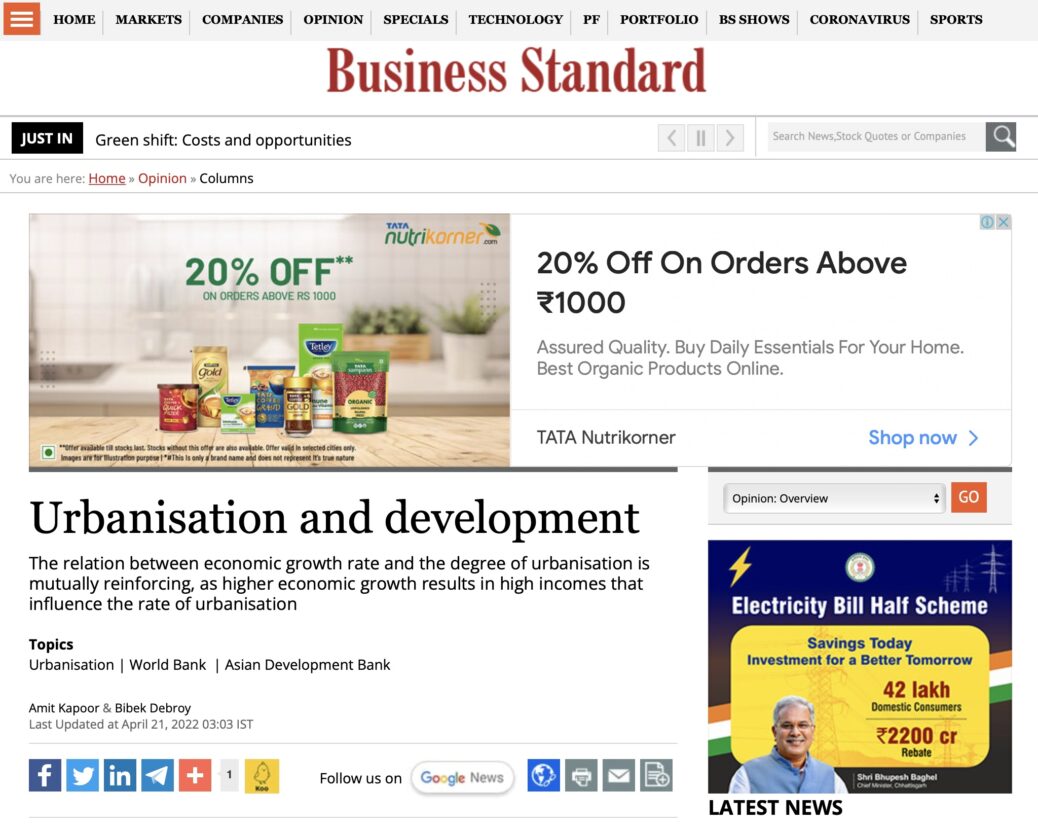 With the World Bank projecting that every seven of 10 people will be living in urban cities by 2050, the emphasis on urbanisation and its correlation with sustainable development has never been stronger. It not only gives a clear picture of the degree of concentration of people in a region but also highlights the underlying patterns that lead to the formation of a city. In India, nearly 35 per cent of the population lives in cities, and it is only projected to increase in the coming years. Factors like employment opportunities, access to innovation and technology, and relatively higher ease of living drive this interest in urban conglomerates. This urbanicity  — the impact of living in urban areas —translates into growth, welfare and immense potential for attracting and extracting talent.

Urbanisation rests on pillars like Technology, Tolerance, Talent and Territorial Assets (popularly known as the 4Ts), that shape the very character and nature of the process as well as the underlying aesthetic that becomes the living force of the city thus formed. Historically, the rise of city centres coincided with the industrial society reaching its heights. For the longest time, therefore, migration to urban spaces was only understood unilaterally in the context of employment opportunities alone. However, in recent years, urbanisation has also been closely associated with globalising forces that aim at integrative development and poverty reduction. Cities have become the centre of connectivity globally, fostering vigorous efforts toward reducing income inequality and increasing the ease of living for their population. Today, people migrate from the countryside to the cities steered by the ambition of leading a better life. This urbanisation also spills over to the rural regions as remittances from the city result in a higher rate of consumption and asset holdings.

Most intriguingly, it is the Global South that is experiencing an acceleration in the pace of urbanisation. This fast-paced urbanisation has also complemented the emergence of competitive markets from the developing world at the global centrestage. The timing of these spatial transformations in the developing world is rooted in historical processes. The period from the 14th till the 19th century witnessed urbanisation in the now developed countries. When looked at together with the colonisation and consequent decolonisation of the Global South and the general trajectory of development within these countries, the timing of it all becomes clear. This urbanisation has occurred with demonstrable economic growth and development as well. In India, the first two decades of the 21st century saw a sustained rise in the degree of urbanisation: From around 27 per cent in 2000 to nearly 35 per cent of the total population living in urban areas in 2020. With a growth of about 7.2 per cent, the World Bank data shows a gradual rise in the percentage of the population concentrated in urban cities. The average economic growth rate in the country was recorded at 4.4 per cent in the same period. Globally, the economic growth rate stood at a mere 1.4 per cent in the 2000-2010 period.

Urban cities, as the drivers of growth and development, also foster economic competition. By city competitiveness, we mean the ability of cities to create strong markets that produce goods and services that represent good value in relation to comparable products of other urban regions. This definition by Asian Development Bank highlights the importance of urban cities developing a competitive spirit in order to strive for the best economic and social systems that steer development. In the rapidly urbanising world, maintaining the quality of services, achieving sustainable development and preserving competition are some of the significant challenges facing the cities. In the Asian context, the importance of competitiveness has become more evident as cities like Hong Kong and Bengaluru emphasise innovation advancement, investment in infrastructure, and skilled labour. This adds value to the city and positively impacts the lives of people living in it.

Urbanisation is not a process that happens in a vacuum. As discussed above, it is influenced by several historical and developmental processes that are embedded in fostering competition to trigger economic growth at the national level. In many ways, even the challenges that urbanisation brings along present unique opportunities to reconfigure cities on the path of sustainable goals and socio-economic development that will lead to a more robust social system. As a companion to development, it is pertinent to closely watch the pace of urbanisation in India as it will only lead to the creation of sustainable pathways and pro-growth knowledge production.

The article was published with Business Standard on April 20, 2022.