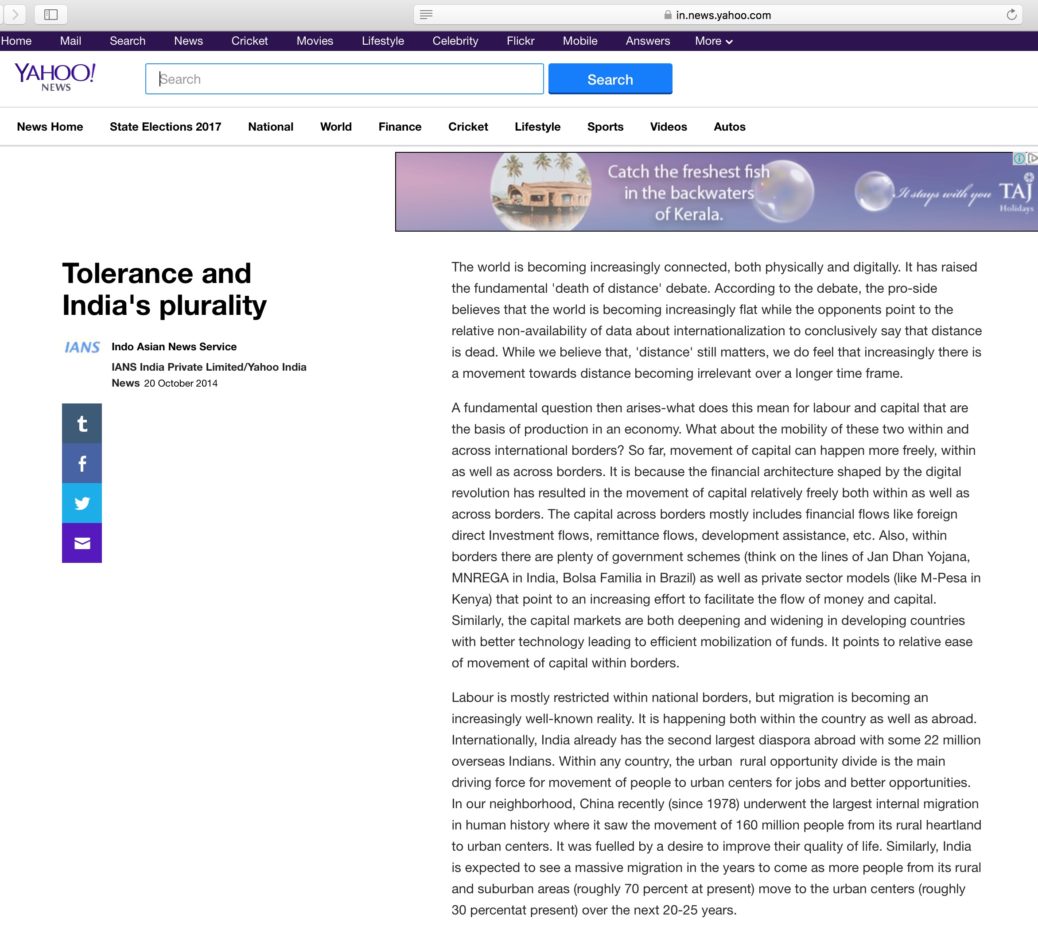 The world is becoming increasingly ‘connected’ both physically and digitally. It has raised the fundamental ‘death of distance’ debate. According to the debate, the pro-side believes that the world is becoming increasingly flat while the opponents point to the relative non-availability of data about internationalization to conclusively say that distance is dead.  While we believe that, ‘distance’ still matters, we do feel that increasingly there is a movement towards distance becoming irrelevant over a longer time frame.

A fundamental question then arises-what does this mean for labour and capital that are the basis of production in an economy. What about the mobility of these two within and across international borders? So far, movement of capital can happen more freely, within as well as across borders. It is because the financial architecture shaped by the digital revolution has resulted in the movement of capital relatively freely both within as well as across borders. The capital across borders mostly includes financial flows like foreign direct Investment flows, remittance flows, development assistance, etc. Also, within borders there are plenty of government schemes (think on the lines of Jan Dhan Yojana, MNREGA in India, Bolsa Familia in Brazil etc.) as well as private sector models (like M-Pesa in Kenya) that point to an increasing effort to facilitate the flow of money and capital. Similarly, the capital markets are both deepening and widening in developing countries with better technology leading to efficient mobilization of funds. It points to relative ease of movement of capital within borders.

Labour is mostly restricted within national borders, but migration is becoming an increasingly well-known reality. It is happening both within the country as well as abroad. Internationally, India already has the second largest diaspora abroad with some 22 million overseas Indians.  Within any country, the urban – rural opportunity divide is the main driving force for movement of people to urban centers for jobs and better opportunities. In our neighborhood, China recently (since 1978) underwent the largest internal migration in human history where it saw the movement of 160 million people from its rural heartland to urban centers. It was fuelled by a desire to improve their quality of life.  Similarly, India is expected to see a massive migration in the years to come as more people from its rural and suburban areas (roughly 70 % at present) move to the urban centers (Roughly 30% at present) over the next 20-25 years.

What do these broad urbanization and globalization prospects imply for societies? In our opinion, this calls for tolerance as a fundamental driver for social progress within and across societies. Tolerance is the ‘willingness to accept feelings, habits, or beliefs that are different from your own’. It appears to us that this fundamental value at the level of individuals and communities will have a very strong bearing on the way the world will re-structure in the years to come. Economic mobility should also lead to social understanding and cohesion else this will lead to a situation of alienation and conflict.

The World Values Survey recently came up with data on 81 countries where respondents were asked to identify people who they did not want as their neighbors. The survey showed that a large fraction of Indian respondents (43.5 %) chose that they did not want a neighbor from a different race. It was the 2nd worst percentage after Jordan where 51.4% surveyed people did not want people from a different race to be their neighbors. It leads us in the question of racial tolerance. While we believe this survey may not completely capture intolerance, it certainly points to some deep biases within our society. Broader and deeper research is necessary for settling the debate on racial prejudice and ways to tackle this in society.

It is indeed very unnerving and painful to hear stories of northeastern people in our country being beaten and tortured in Gurgaon and Bangalore recently. Similarly, when it comes to the racial insensitivity against black people we seem to have a profound bias against them as a people. True, sometimes like everyone they might be at fault but taking the law in one’s hands is no solution to diffusing tensions and resolving matters. The recent incident where three African youth were beaten up by a mob for allegedly abusing a woman passenger inside a metro station points to a dark and disturbing trend. We as a people have been known historically for our long tradition of religious tolerance and peaceful coexistence with people from other faiths and beliefs. It may be pertinent to understand what the ‘Father of the Nation’ had in mind when he talked about the idea.

‘I do not want my house to be walled in on all sides and my windows to be stuffed. I want the cultures of all the lands to be blown about my house as freely as possible. But I refuse to be blown off my feet by any’. It is critical that we don’t get blown off but equally pertinent is the willingness to let the culture of all lands blow entirely across our house. If we do not allow this to happen, we will remain autarkic to ideas and thoughts as well as to trade and commerce.  It is the antithesis to the idea of Indian civilization that is based on tolerance, openness and mutual respect.