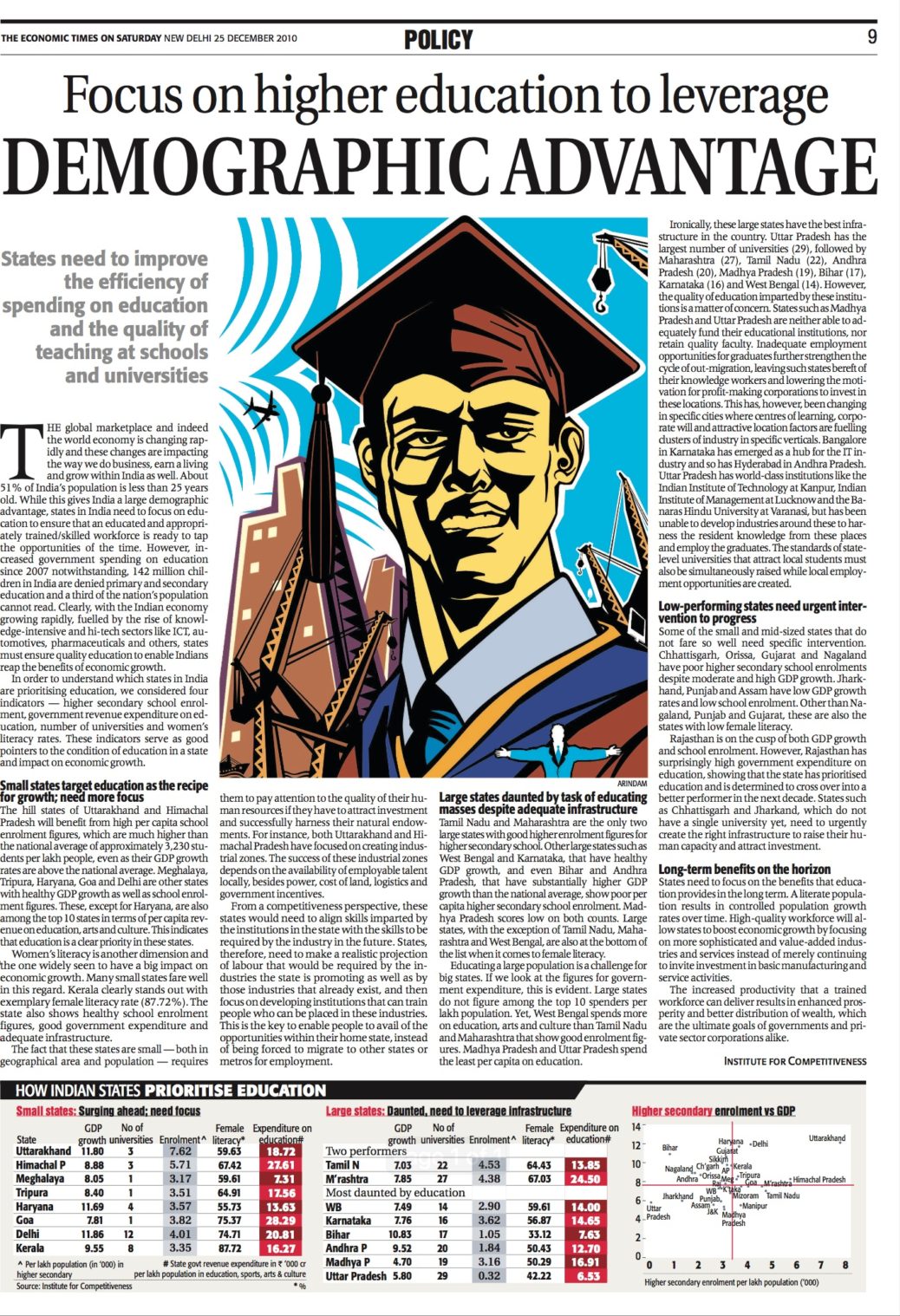 The global marketplace and indeed the world economy is changing rapidly and these changes are impacting the way we do business, earn a living and grow within India as well. About 51% of India’s population is less than 25 years old. While this gives India a large demographic advantage, states in India need to focus on education to ensure that an educated and appropriately trained/skilled workforce is ready to tap the opportunities of the time.

However, increased government spending on education since 2007 notwithstanding, 142 million children in India are denied primary and secondary education and a third of the nation’s population cannot read. Clearly, with the Indian economy growing rapidly, fuelled by the rise of knowledge-intensive and hi-tech sectors like ICT, automotives , pharmaceuticals and others, states must ensure quality education to enable Indians reap the benefits of economic growth.

In order to understand which states in India are prioritising education, we considered four indicators – higher secondary school enrolment , government revenue expenditure on education , number of universities and women’s literacy rates. These indicators serve as good pointers to the condition of education in a state and impact on economic growth.

The hill states of Uttarakhand and Himachal Pradesh will benefit from high per capita school enrolment figures, which are much higher than the national average of approximately 3,230 students per lakh people, even as their GDP growth rates are above the national average. Meghalaya, Tripura, Haryana, Goa and Delhi are other states with healthy GDP growth as well as school enrolment figures. These, except for Haryana, are also among the top 10 states in terms of per capita revenue on education, arts and culture. This indicates that education is a clear priority in these states.

Women’s literacy is another dimension and the one widely seen to have a big impact on economic growth. Many small states fare well in this regard. Kerala clearly stands out with exemplary female literacy rate (87.72%). The state also shows healthy school enrolment figures, good government expenditure and adequate infrastructure.

The fact that these states are small – both in geographical area and population – requires them to pay attention to the quality of their human resources if they have to attract investment and successfully harness their natural endowments . For instance, both Uttarakhand and Himachal Pradesh have focused on creating industrial zones. The success of these industrial zones depends on the availability of employable talent locally, besides power, cost of land, logistics and government incentives.

From a competitiveness perspective, these states would need to align skills imparted by the institutions in the state with the skills to be required by the industry in the future. States, therefore, need to make a realistic projection of labour that would be required by the industries the state is promoting as well as by those industries that already exist, and then focus on developing institutions that can train people who can be placed in these industries. This is the key to enable people to avail of the opportunities within their home state, instead of being forced to migrate to other states or metros for employment.

Tamil Nadu and Maharashtra are the only two large states with good higher enrolment figures for higher secondary school. Other large states such as West Bengal and Karnataka, that have healthy GDP growth, and even Bihar and Andhra Pradesh, that have substantially higher GDP growth than the national average, show poor per capita higher secondary school enrolment. Madhya Pradesh scores low on both counts. Large states, with the exception of Tamil Nadu, Maharashtra and West Bengal, are also at the bottom of the list when it comes to female literacy.

Educating a large population is a challenge for big states. If we look at the figures for government expenditure, this is evident. Large states do not figure among the top 10 spenders per lakh population. Yet, West Bengal spends more on education, arts and culture than Tamil Nadu and Maharashtra that show good enrolment figures . Madhya Pradesh and Uttar Pradesh spend the least per capita on education.

Ironically, these large states have the best infrastructure in the country. Uttar Pradesh has the largest number of universities (29), followed by Maharashtra (27), Tamil Nadu (22), Andhra Pradesh (20), Madhya Pradesh (19), Bihar (17), Karnataka (16) and West Bengal (14). However, the quality of education imparted by these institutions is a matter of concern. States such as Madhya Pradesh and Uttar Pradesh are neither able to adequately fund their educational institutions, nor retain quality faculty.

Inadequate employment opportunities for graduates further strengthen the cycle of out-migration , leaving such states bereft of their knowledge workers and lowering the motivation for profit-making corporations to invest in these locations. This has, however, been changing in specific cities where centres of learning, corporate will and attractive location factors are fuelling clusters of industry in specific verticals. Bangalore in Karnataka has emerged as a hub for the IT industry and so has Hyderabad in Andhra Pradesh. Uttar Pradesh has world-class institutions like the Indian Institute of Technology at Kanpur, Indian Institute of Management at Lucknow and the Banaras Hindu University at Varanasi, but has been unable to develop industries around these to harness the resident knowledge from these places and employ the graduates. The standards of statelevel universities that attract local students must also be simultaneously raised while local employment opportunities are created.

Some of the small and mid-sized states that do not fare so well need specific intervention. Chhattisgarh, Orissa, Gujarat and Nagaland have poor higher secondary school enrolments despite moderate and high GDP growth. Jharkhand , Punjab and Assam have low GDP growth rates and low school enrolment. Other than Nagaland , Punjab and Gujarat, these are also the states with low female literacy.

Rajasthan is on the cusp of both GDP growth and school enrolment. However, Rajasthan has surprisingly high government expenditure on education, showing that the state has prioritised education and is determined to cross over into a better performer in the next decade. States such as Chhattisgarh and Jharkand, which do not have a single university yet, need to urgently create the right infrastructure to raise their human capacity and attract investment.

Long-term benefits on the horizon

States need to focus on the benefits that education provides in the long term. A literate population results in controlled population growth rates over time. High-quality workforce will allow states to boost economic growth by focusing on more sophisticated and value-added industries and services instead of merely continuing to invite investment in basic manufacturing and service activities.

The increased productivity that a trained workforce can deliver results in enhanced prosperity and better distribution of wealth, which are the ultimate goals of governments and private sector corporations alike.

The article was published with Economic Times on December 25, 2010.