View: India needs to rethink strategy for the IT sector 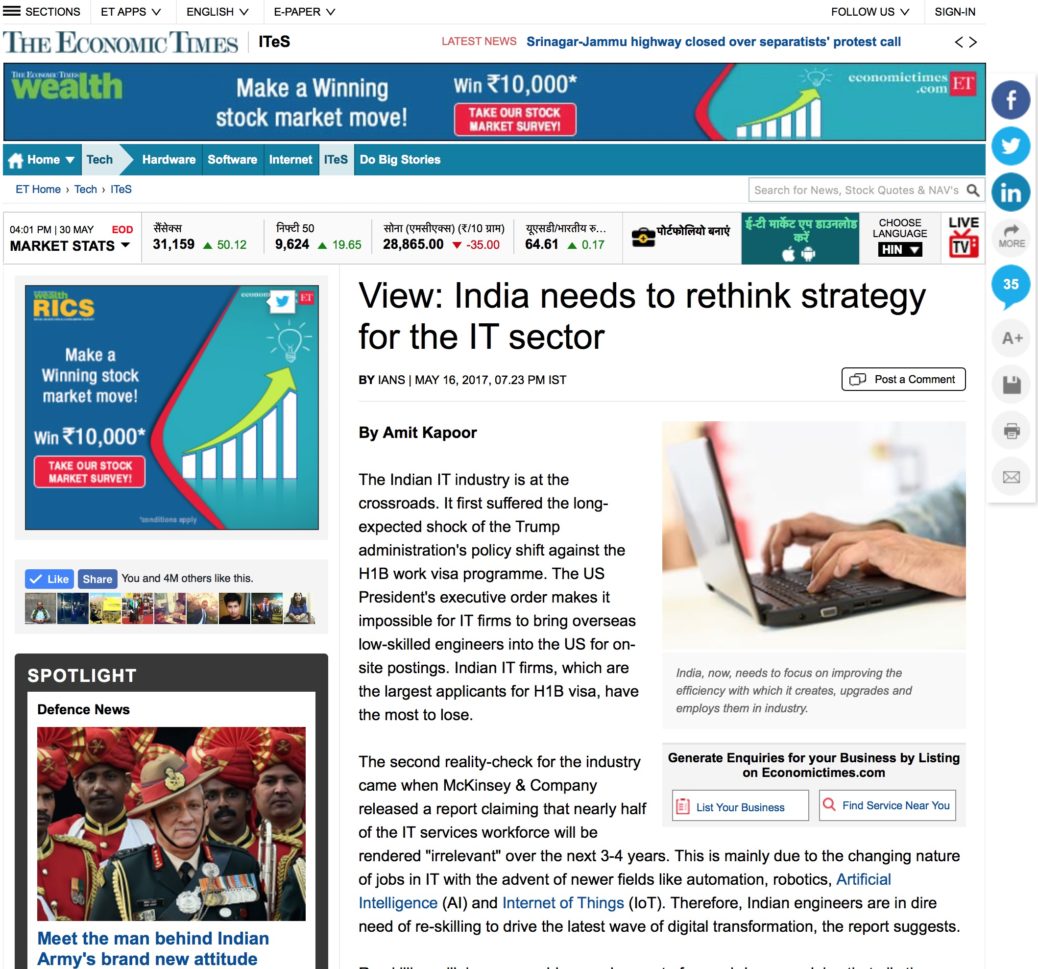 The Indian IT industry is at a crossroads. The sector first suffered the long-expected shock of the Trump administration’s policy shift against the H1B work visa programme. Trump’s executive order makes it impossible for IT firms to bring overseas low-skilled engineers into the US for on-site postings. Indian IT firms, which are the largest applicants for H1B visa have the most to lose.

The second reality-check for the industry came about when McKinsey & Company released a report claiming that nearly half of the IT services workforce will be rendered “irrelevant” over the next 3-4 years. This is mainly due to the changing nature of jobs in IT with the advent of newer fields like automation, robotics, Artificial Intelligence (AI) and Internet of Things (IoT). Therefore, Indian engineers are in dire need of re-skilling to drive the latest wave of digital transformation, the report suggests.

However, re-skilling will only address a part of a much-larger malaise that ails the Indian IT industry. With a loss in outsourced jobs and a failure to be a part of the next digital revolution, the industry needs to completely revitalise its latent competitiveness.

In “Competitive Advantage of Nations”, Michael Porter attributes a nation’s competitiveness to the capacity of its industries to innovate and upgrade. But, the industry that has led the Indian growth story has failed on that front. Innovations have hardly emerged from the innumerable engineers that India produces. Rather, India has mainly been a factor-driven economy, where its basic factor conditions like low-cost labour are the dominant basis of competitive advantage and exports.

Porter’s suggestion for improving national competitiveness is poles apart from the prevalent thinking that guides policy making in most nations. According to the conventional approach, labour costs, exchange rates, interest rates, and economies of scale are believed to be the leading determinants of competitiveness. India has also been a victim of such a flawed approach in public policy.

Contrary to the traditional line of reasoning, Michael Porter concluded after years of studying patterns of competitive successes in different nations that competitive advantage is achieved through acts of innovation. In this case, innovation is perceived in the broadest sense, including new technologies and new way of doing things.

India has consistently failed to inculcate an environment of research and innovation at all levels of education. The IT sector has been no different. An analysis of AICTE-CII Survey of Industry-Linked Technical Institutes in 2013 showed that only 1 percent of technical institutions do any consultancy work or research projects for the industry. The country produces the highest number of engineers in the world who are hardly given any encouragement to innovate.

With the changing nature of work and the necessity to generate more domestic jobs, India’s high stock of human resource has grown less and less important over time. The country, now, needs to focus on improving the efficiency with which it creates, upgrades, and employs them in the industry.

In short, India needs to make its inevitable move from being a factor-driven economy to an efficiency-led one. In such an economy, the competitive advantage arises from producing more advanced products and services highly efficiently. Factors like market transparency and quality of education play a crucial role in improving efficiency.

Over the last few years, advances have been made on both fronts. In a bid to improve India’s ease-of-doing-business, the government has been making consistent efforts to build an efficient infrastructure and a business-friendly administration. On the education front, the New Education Policy is under consultative process. The draft attempts to address the issues that ail Indian education with a holistic approach. To address the quality issues, it proposes to leverage the recently launched National Institute Ranking Framework (NIRF).

However, to maintain a competitive advantage in areas like engineering, independent and innovative thinking needs to be encouraged among Indian graduates. This requires a complete overhaul of the system of education delivery in the country for practice-based professions. Problem-based learning, which is an innovative approach to learning via problem solving, can be looked upon as a possibility.

Further, Porter points out that to support competitive advantage, a factor must be highly specialised to industry needs. Training in highly specialised sectors would also address the two issues that are threatening job availability in the industry. First, restrictions in H1B visas should have little impact on specialised professionals and second, skilled workers with specialisations would also not be rendered “irrelevant” as they can contribute more meaningfully to the development of new fields in the industry. Indian engineering colleges should encourage more graduates to pursue specialisations rather than producing generalists. The Indian education system holds the key to unlocking the competitiveness of the Indian IT sector.

India runs the risk of losing the competitive edge it has enjoyed in the sector over the years through its strategy of cost arbitrage. There is an urgent need to nurture skilled specialists that can stimulate innovation and drive growth. It is in times like these that the nation needs a guiding hand to put it on a higher growth trajectory. Fortunately, Michael Porter (www.competitiveness.in/mep) himself is visiting India on the 24th and 25th of May and will share his views on improving the competitiveness of a country. His visit comes at an opportune time and presents Indian policymakers and industrialists with the perfect opportunity to rethink their strategy based on changing industry and economic trends.

The article was published with Economic Times on May 16, 2017.