Democracy in the age of data 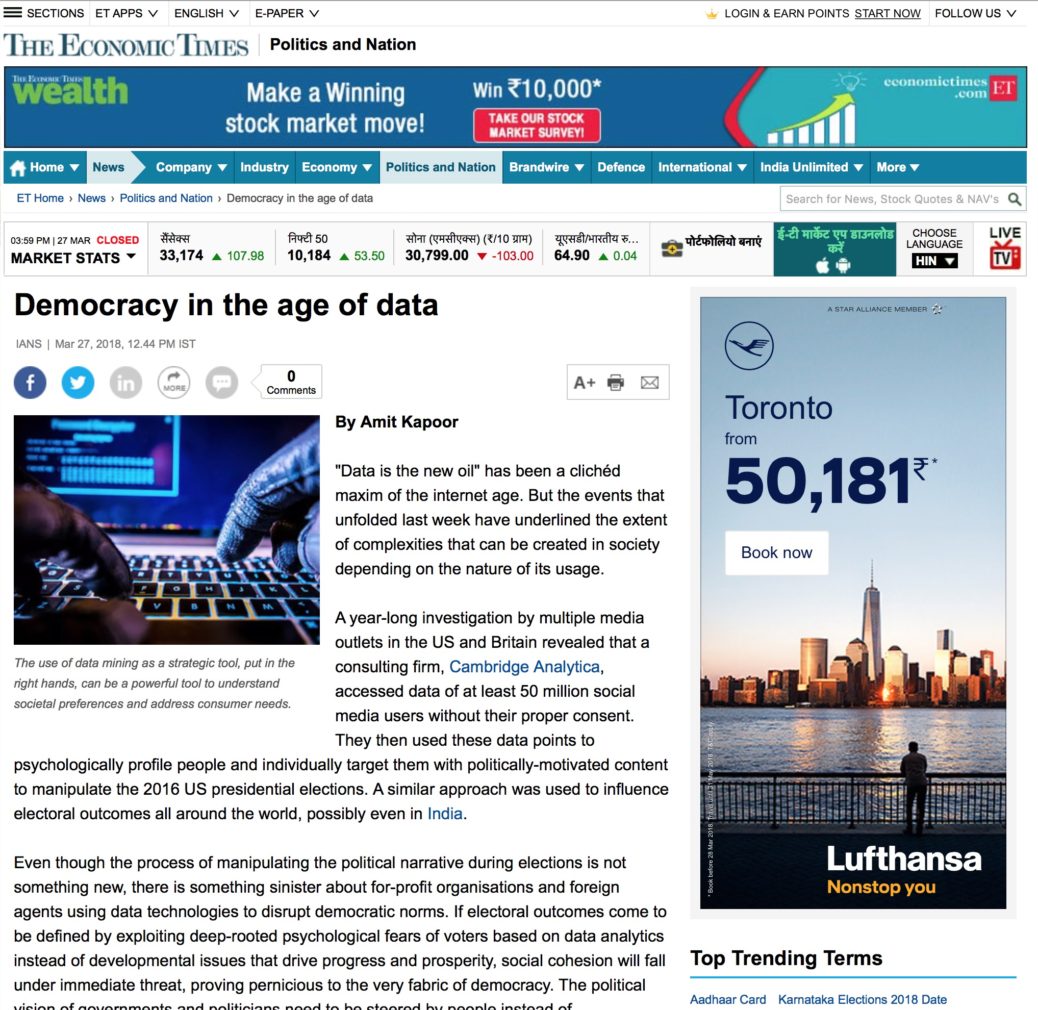 Democracy in the age of data

“Data is the new oil” has been a clichÃ©d maxim of the internet age. But the events that unfolded last week have underlined the extent of complexities that can be created in society depending on the nature of its usage.

A year-long investigation by multiple media outlets in the US and Britain revealed that a consulting firm, Cambridge Analytica, accessed data of at least 50 million social media users without their proper consent. They then used these data points to psychologically profile people and individually target them with politically-motivated content to manipulate the 2016 US presidential elections. A similar approach was used to influence electoral outcomes all around the world, possibly even in India.

Even though the process of manipulating the political narrative during elections is not something new, there is something sinister about for-profit organisations and foreign agents using data technologies to disrupt democratic norms. If electoral outcomes come to be defined by exploiting deep-rooted psychological fears of voters based on data analytics instead of developmental issues that drive progress and prosperity, social cohesion will fall under immediate threat, proving pernicious to the very fabric of democracy. The political vision of governments and politicians need to be steered by people instead of mathematical algorithms.

It must be highlighted that social media and the vast explosion of data due to it are not the problems per se. However, when societies are finding themselves being increasingly run by data, a defined set of ethical norms need to be formulated to guide its use. The issue is of the utmost importance for India, as it has a significant online presence that is vulnerable to privacy violations. It has the highest number of Facebook users and the second-highest number of Twitter users in the world — with a combined reach of almost 300 million.

A committee of experts under Justice B.N. Srikrishna has already been set up to deliberate upon a data protection framework for India. It is working on drafting a data protection bill and has deliberated on a number of pertinent issues like what constitutes “personal data”, the specifications of consent and establishment of a data protection authority. A white paper has also been published by the authority, detailing a lengthy discourse on these very issues. Meanwhile, the Parliamentary Standing Committee on Information Technology has also listed “Citizens’ data security and privacy” as a subject of study. However, not much seems to have been done on the topic. Recent events might hopefully set the ball rolling on that front and inspire a multi-partisan report on the matter.

Once the processes of setting up a robust framework of regulatory policy and statutory law to govern matters of data privacy are complete, there will be a requirement to establish cultural expectations that incorporate ethical standards right when the data technologies are being built. The application of regulatory mechanisms after individuals have been profiled is akin to closing the stable doors after the horses have bolted. The race to become the next-big-thing in technology has placed ethics on the backseat and, hence, it is often the case that investigations are conducted, and apologies are demanded, only after the damage has been done. The environment of “develop first, question later” will have to change.

The issue of data and privacy regulations will become even more important as technological companies gain greater market share in provision of financial services instead of traditional banks. When you instantly transfer money to friends and family over apps like WhatsApp to avoid the hassle of asking around for bank account numbers, the company gains direct access to your transactions. The power of that data will lie with the entity which posses it. Interestingly, retail banks will begin to lose out on this essential oil as it will be unable to identify customer interactions once it shifts to these new age non-banks.

The use of data mining as a strategic tool, put in the right hands, can be a powerful tool to understand societal preferences and address consumer needs. However, no good comes with a complementing bad and our democratic societies need to be wary of the latter by building robust security mechanisms that ensure privacy and consent. At times, even that might not be enough. Consumers willingly hand over a lot of personal information for the convenience of services without knowledge of the consequences of their actions and the eventual use of the data. Therefore, a final action that needs to be undertaken in the world of data is to build user-awareness. There is simply no substitute to a well-informed consumer base.