The Path of Self Reliance 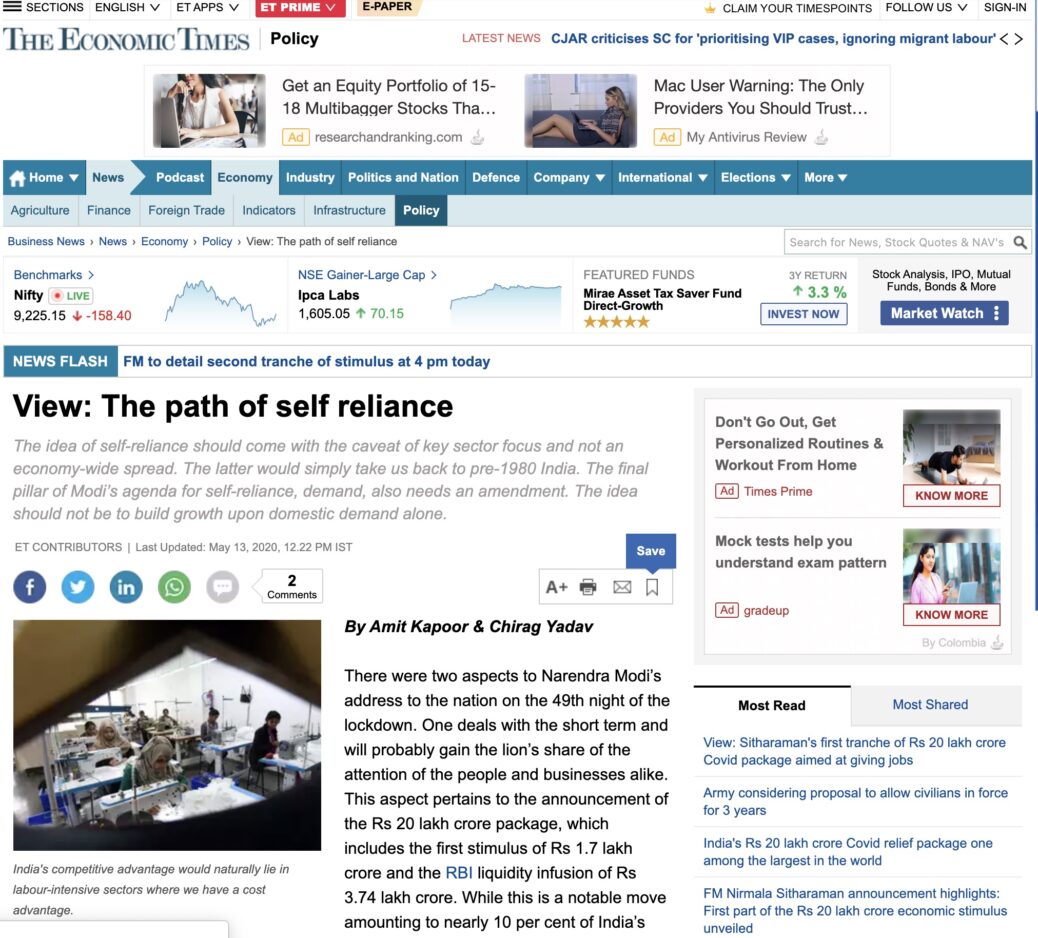 The Path of Self Reliance

There were two aspects to Narendra Modi’s address to the nation on the 49th night of the lockdown. One deals with the short term and will probably gain the lion’s share of the attention of the people and businesses alike. This aspect pertains to the announcement of the Rs 20 lakh crore package, which includes the first stimulus of Rs 1.7 lakh crore and the RBI liquidity infusion of Rs 3.74 lakh crore. While this is a notable move amounting to nearly 10 percent of India’s GDP, its significance pales in comparison to the second aspect of the speech, which might not get as much attention but will define the country’s growth trajectory for years to come.

The second aspect of Modi’s speech lay in his stress on the importance of self-reliance for the country. Giving an example of a recent achievement in self-reliance Modi highlighted that when the coronavirus crisis began, India produced no PPE kits and barely any masks. Today, India carries the capacity to manufacture 2 lakh PPEs and 2 lakh N95 masks. In a bid to assure the world, he also stressed that the focus on self-reliance does not imply self-centrism since India considers the world as one family. He also tied the package with this message of self-reliance as a path to an ‘Atmanirbhar Bharat Abhiyan’.

The exact contours of self-reliance are still unclear at this stage for the meaning that it holds for the Indian economy. Does it imply import substitution and heavy tariffs or is it just rhetoric for impending reforms? But the idea of making local Indian goods global is one that is worth working towards. Take the ubiquitous nachos, for example. The immensely popular global snack has its humble origins in Mexico in World War II but has spread like wildfire across the globe due to its global positioning as an accessible snack. France and wines hold the same relationship. So do Italy and olive oil. And it is not just food where nations can gain exclusive global competency. A few products can be named for India itself. Items of clothing like Kashmir shawl and Mysore silk are a few products that hold the potential to go global. In terms of competition, nations that have a unique competency in manufacturing certain products that cannot be replicated by others enables sustained streams of economic growth.

A similar approach needs to be adopted with local brands. The rise of the East Asian economies was driven by states enabling their local brands achieve global dominance in their initial phases of development. This was done not through undue state support but in an environment of domestic competition. Global names like Hyundai and Samsung are the outcome of such state-led support to the best export performers in South Korea by Park Chung-Hee. Therefore, the idea of making local products and brands global is a vital one for economic development.

But the Indian economy needs to be wary of trying to gain domestic competitiveness in every sector of the economy. Economies need to gain competency through specialisation. The most glaring example in favour of the importance of specialisation was tragically experienced by the Chinese during the infamous Cultural Revolution. The Chinese government asked everyone to stop farming and build steel mills in their own backyard. The people who had little specialisation in the industry complied anyway. This resulted in a lack of rice in the country leading to widespread starvation and death. Moreover, the steel that they produced was of such inferior quality that it could be put to no use. If the Chinese government had let its workforce improve in the sector in which it specialised, which was agriculture, the outcome would have been a less dark Mao history.

Therefore, India needs to strive towards building global products and global brands but in sectors where it possesses a competitive advantage. This can be achieved in two ways: cost advantage and differentiation advantage. This is where one of the five pillars of self-reliance that Narendra Modi mentioned could work in India’s favour: its demography. If India manages to address its long-standing concerns with land regulation, labour law, and banking finance, which impede domestic manufacturing investment, the country’s vast workforce could be tapped into effectively and achieve competitive advantage.

Such a competitive advantage would naturally lie in labour-intensive sectors where India has a cost advantage. But it also extends to sectors that are skill-intensive as well. Pharmaceuticals and space research are areas where the cost-effectiveness of scientific talent has worked to India’s advantage. It must be noted that both these sectors are the outcome of state support for specialised industry development. Thus, India’s demographic advantage could drive the cost advantage in manufacturing, but the state must direct its resources towards areas where it can achieve the differentiation advantage through specialisation.

Thus, the idea of self-reliance should come with the caveat of key sector focus and not an economy-wide spread. The latter would simply take us back to pre-1980 India. The final pillar of Modi’s agenda for self-reliance, demand, also needs an amendment. The idea should not be to build growth upon domestic demand alone. Globalisation, despite all its flaws, lifted billions out of poverty through an expansion of global demand. India will need to tap into the world markets as well if it aims to achieve sustained fast-paced growth. The country has the benefit of hindsight to assess the factors that drove or impeded growth of nations in the past. It must use that benefit to its advantage and pave its way forward.

The article was published with Economic Times on May 13, 2020.