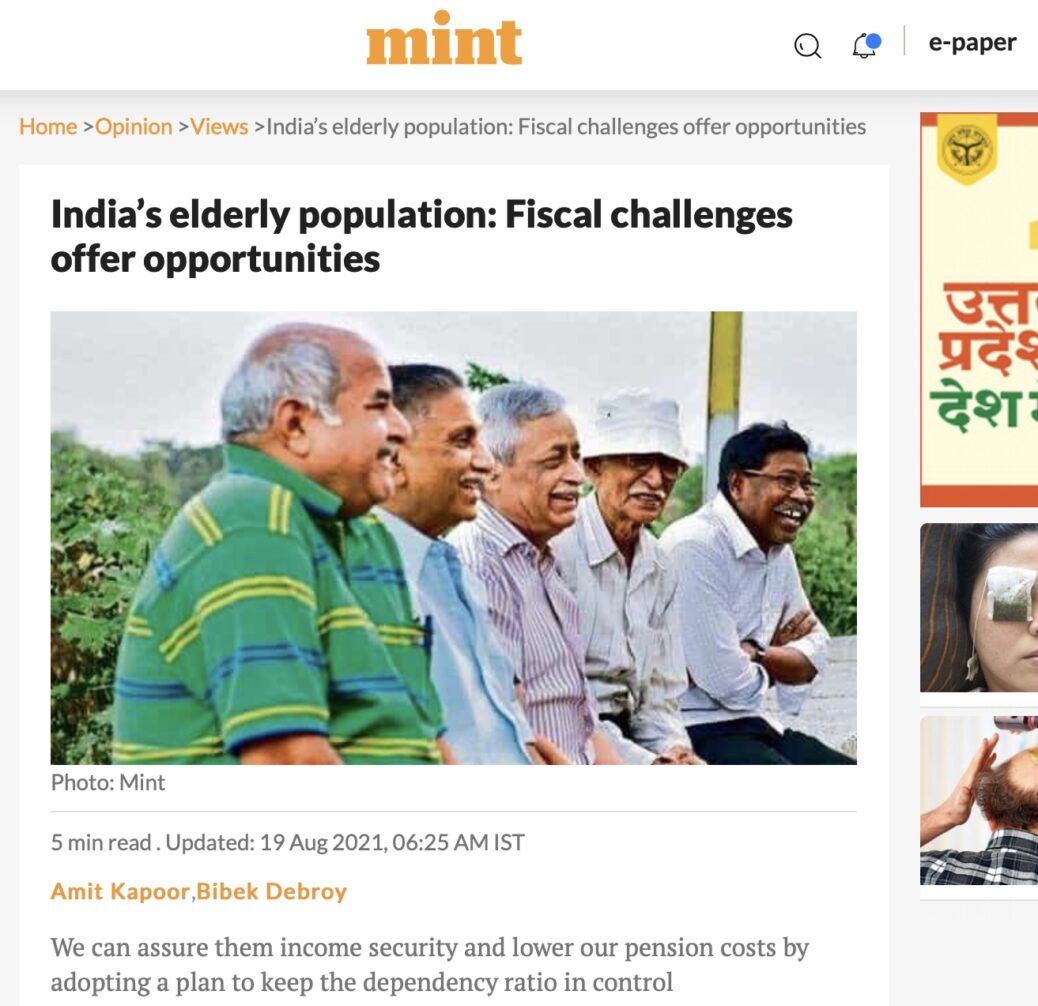 Ample discussions surround the topic of India’s demographic dividend. The country is at a peculiar stage in its demographic transition, characterised by a bulge in its youth population, which can be a window of opportunity to accelerate growth. However, a parallelly occurring phenomenon that requires equal attention with regards to India’s growth trajectory is rapid ageing.

Countries all around the world are experiencing an increase in the proportion of elderly population because of falling fertility rate and rising life expectancy. UN population projections state that the population of people aged 65 and above, which constituted 703 million people in 2019, will double to 1.5 billion in 2050, thus accounting for 16 percent of the world population.[1] But developing countries like India are experiencing ageing at a more rapid pace. According to WHO, India’s current old age population will rise from the current 60 million to over 227 million by 2050. The old-age dependency ratio will accordingly increase from 9.8 to 20.3. Hence, even as the demographic dividend works to enhance economic growth, the increase in elderly population and the rising pressure on pension systems can offset those efforts.

This posits two policy challenges- ensuring income security for the elderly as well as mitigating the fiscal costs that arise from the high old-age dependency ratio.

Although the rising proportion of elderly population throws up fiscal challenges for the country, it also calls for greater focus on income security for the elderly population, which is a concern that cannot be ignored to focus solely on the economy. Against this backdrop, the Quality of life for Elderly Index set out to present an assessment of the quality of life led by the elderly population across India’s states and union territories. The study assesses their well-being across four pillars, further split into eight sub-pillars that include 45 indicators.

While the index focuses on the overall well-being of the older population, income security forms an integral part and one of the pillars of assessment in the study. The findings reveal that income security is the biggest challenge with regards to well-being of the elderly in the country. According to the index, the Income Security pillar has the lowest national average score at 33.03 (out of 100), with 62% of the regions scoring below the national average. The pillar evaluates the essential measures that provide income support in pensions and provident funds. In the index, 21 out of 36 states were found to have utilized less than 50% of the funds sanctioned under the National Programme for Health Care of the Elderly (NPHCE), while Chandigarh and Dadra and Nagar Haveli were not sanctioned any amount. Majority of the states also fall short in providing benefits of existing pension schemes for the elderly below poverty line.

The index scores reflect our policy approach towards ensuring income support to the elderly, as India spends only 1% of its GDP on pensions.[2] The Indira Gandhi National Old Age Pension Scheme (IGNOAPS), Indira Gandhi National Widow pension scheme (IGNWPS) and Atal Pension Yojana (APY) are the key interventions in this regard. Thus, both the Centre and States need to enhance efforts, especially in states with a higher proportion of the elderly population.

All of these findings point to one fact- despite concerns about the fiscal pressures of ageing on the economy, the reality is that the income support systems in their current form are not even capable of catering to the elderly when their proportion in the population is only 8.6%. The finding is concerning in itself, but it also does not bode well for India’s ageing journey in the near future. It is indicative of how well our pension systems will fare when old people will account for a larger proportion of the population. The need of the hour is to strengthen our pension systems through better funding and coverage.

Now, the second challenge remains; the economy still needs to mitigate the fiscal costs that arise from the rising old-age dependency ratio. The first step to resolving this issue is to change the negative connotation attached to old age. At a time in scientific evolution when humanity has overcome so many perilous diseases that the average lifespan has considerably increased, it would be unwise to assume that an individual ceases to be a valuable resource after crossing the threshold of 60 years. The vocabulary used for the elderly needs to change from “burden” to “asset”.

As the demographic dividend diminishes and the pressure on pension systems risk mounting, the Index suggests that raising the retirement age in the future, albeit in a phased manner, so as not to jeopardise opportunities for the younger generation. This would usher an age of multigenerational workforce, wherein older workers bring wisdom and work experience to complement the new-age skills and energy of the younger workforce.

However, raising the retirement age is a challenging task too, and requires that the country begins preparing for it well in advance. To leverage the second demographic dividend, the institutional and policy framework should be conducive to the intended change. Further, active ageing is key here, as it is not possible to extend the working age of the population, if the country does not have a pool of healthy elderly population capable of working in the first place. It must be further noted that the well-being of the elderly in the future is tied to the well-being of the working population today. A strong multigenerational workforce is only possible in the future if the youth of today have adequate access to social goods and employment opportunities.

As India experiences a demographic transition that holds promises of economic abundance, policymakers need to look closer, and beyond the demographic dividend. In addition to taking steps to ensure the well-being of the elderly today and in the coming decades, policymakers also need to make provisions for easing the fiscal challenges it entails, lest the challenges of tomorrow weigh heavier than the benefits of today.