The Curious Case of Census Towns: The Case for Integrated Development of Rural and Urban Areas 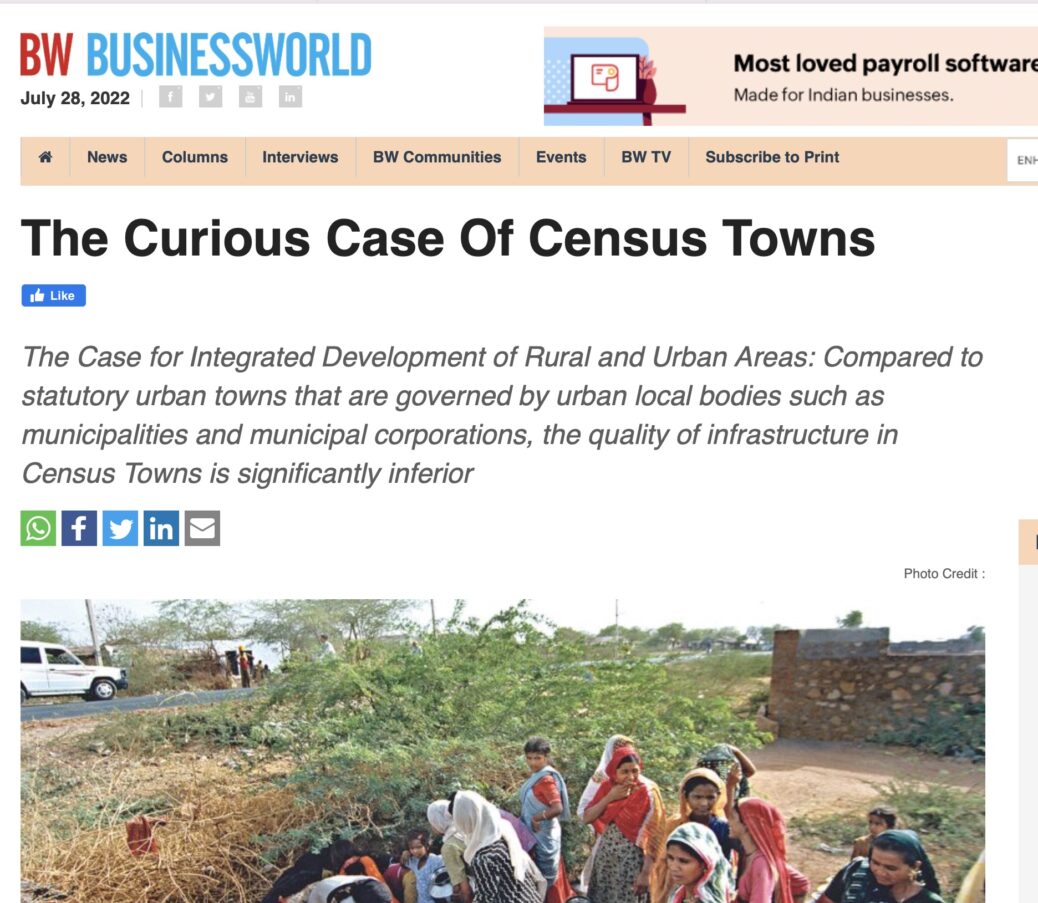 Literature on service delivery suggests that a state is incapable of delivering critical services to the agents if it operates vertically, i.e., in a top-down manner. In a sense, India has been an exception. As far as creating a safety net is concerned, the vertical model has performed exceptionally well with the introduction of the Jan Dhan, Aadhaar & Mobile (JAM) trinity. There is a sharp decline in both inclusion and exclusion errors. Be it any subsidy or even an instalment of PM Kisan; the direct benefit transfer has ensured that beneficiaries are not bereft of what is rightfully theirs. But service delivery is not just about direct benefit transfers.

It is also about (a) basic infrastructure, (b) robust governance structure and administrative capacity to deliver services. In newly urbanising towns, both (a) and (b) fail to cope with the necessities of the growing population. As far as access to basic infrastructure and necessities is concerned, there exists a glaring spatial disparity across the country when it comes to basic infrastructure. The Economic Survey 2020-21 formulated a Bare Necessities Index (BNI), which had 26 indicators on five dimensions, viz., water, sanitation, housing, micro-environment, and other facilities. Access to the bare necessities has improved tremendously as compared to 2012. However, access to bare necessities is lowest in Odisha, Jharkhand, West Bengal and Tripura. Kerala, Punjab, Haryana and Gujarat are the states where access to the bare necessities is easiest. Most schemes which have ensured access to bare necessities (be it Swacch Bharat Abhiyaan or Jal Jeevan Mission) are largely funded by the Union government. However, the implementation of the scheme lies with the states, which in turn leads to the inter-state disparity.

Similarly, the Ministry of Road Transport & Highways used to earlier publish Basic Road Statistics of India. The latest report available in the public domain is from 2017-18. It had a clear distinction between rural and urban roads.

This brings us to a peculiar case of census towns (CTs). In our last column, we delved into the issue of the definition of urban in India. Census Towns are towns that are not statutory towns, i.e., they have not been notified as urban areas by the state government. However, the population of these geographical areas is more than 5,000, more than 75 per cent of the male working population is employed in non-agricultural activities and are with a population density of 400 persons per km2.

According to the 2011 census, there are a total of 3,894 CTs in the country. Ideally, these towns should be classified as urban areas. However, till the state government notifies them as one, they remain technically rural. It means the governance structure in the CTs is also rural. Thus, access to bare necessities is provided by the rural local bodies. So is the case with the development of basic infrastructure. Panchayati Raj institutions primarily have the responsibility of building roads in CTs. Do they have the administrative capacity to deliver these services in CTs? Probably not.

The 11th and 12th Schedules of the Constitution have a list of responsibilities of rural local bodies (RLBs) and urban local bodies (ULBs), respectively. Urban areas have a provision of expenditure on urban amenities and facilities such as parks, gardens, and playgrounds. Urban local bodies are also required to provide sewage systems, solid waste management and construct arterial roads. They are also responsible for providing fire services. Rural local bodies do not have any such responsibilities. The 11th Schedule also doesn’t envisage the propping of slums. That is the reason why it figures in the 12thSchedule but not in the 11th schedule.

Compared to statutory urban towns that are governed by urban local bodies such as municipalities and municipal corporations, the quality of infrastructure in CTs is significantly inferior. Thus, while India is becoming urban, the mushrooming towns are not being classified as urban. Further, a 2018 study by  Shamindra Nath Roy & Kanhu Charan Pradhan of the Centre for Policy Research projects that India is set to add 2,231 new census towns. According to the UN’s The World Population Prospects 2022, India is set to surpass China’s population by 2023, thus becoming the most populous country. This will also be accompanied by an increase in the level of ‘informal’ urbanisation in CTs.

But is the problem just confined to the definition of urban? The 73rd and 74th amendments to the Constitution are the reasons for the delineation of governance structures in rural and urban areas. This means that there are separate ministries and departments at both the Union and state levels. Often, these departments work in silos, just as RLBs and ULBs do.  Maybe the country has to move beyond rural and urban development silos to a model of integrated economic development.

The article was published with Business World on July 25, 2022.