Will the Indian tiger catch the Chinese dragon? 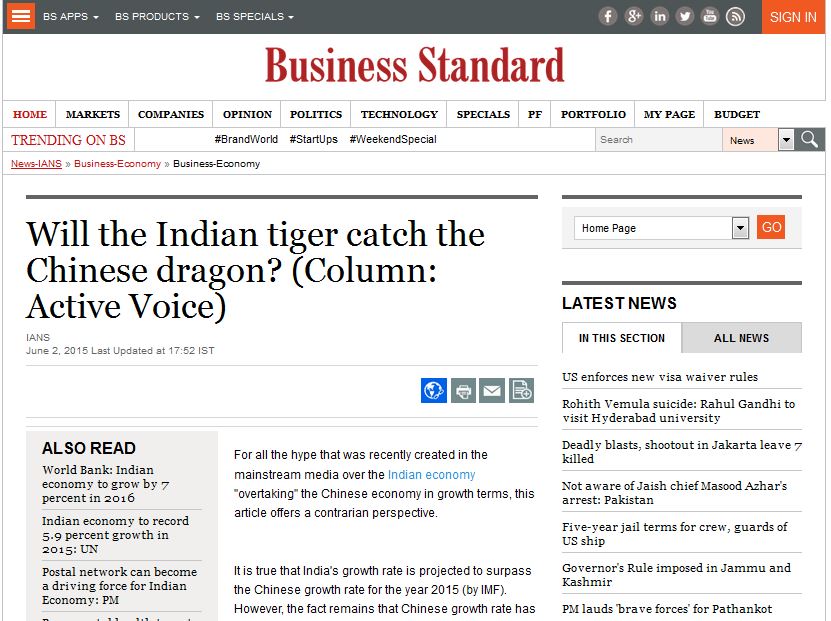 For all the hype that was recently created in the mainstream media over the Indian economy “overtaking” the Chinese economy in growth terms, this article offers a contrarian perspective.

It is true that India’s growth rate is projected to surpass the Chinese growth rate for the year 2015 (by IMF). However, the fact remains that Chinese growth rate has consistently outperformed India in the past 30 years. That means China is already far ahead of India in absolute value terms. An astounding gap of approximately $7.3 trillion is there between the two economies as of 2013 as per World Bank figures. Put another way, it means that the Chinese economy in 2013 was already roughly five times bigger than the Indian economy in current dollar terms.

A brief look at the growth history is pertinent. Chinese leaders, most specifically, Deng Xiaoping, initiated reforms in 1978 under the ‘responsibility system’ that made farmers a kind of entrepreneurs. These, along with several other reforms such as birth control, modernization and a more open approach to trade with the US and Japan led to the Chinese economy becoming export competitive. The 1990s and 2000s saw a greater role for entrepreneurs, Chinese state-owned enterprises as well as a greater integration of China into the world economy.

India under P.V. Narasimha Rao initiated reforms in 1991 primarily due to a balance of payment crises. Some describe these reforms as reforms by stealth rather than by choice. Several sectors saw capital infusion and growth amid policy changes. Prominent among these were the automobile, telecom, pharmaceuticals, IT and banking sectors. India saw the rise of a new and aspirational middle class during the period of increasing affluence and a break away from the license-permit raj.

However, when comparing India and China since the 1980s, the Chinese growth has been astounding (average growth rate close to 10 percent). It is due to greater integration with the world economy both in terms of trade as well as in terms of FDI inflows. On an average, from 1982-2013, the FDI inflows into China were more than eight times that into India. Similarly, the merchandise trade was five times that of India during the commensurate period.

A look at the sectoral contributions and their change over time also helps in understanding the transformation that has taken place in these economies and what can be expected in the future. While China saw broad-based growth post its reforms, the Indian growth story is seen to be restricted to very select sectors of industry and broadly, service sectors. The speed of change too is a defining feature of the Chinese economy.

The agricultural contribution in both the economies went down from roughly 33 percent in 1983 to 10 percent in China and to 18 percent in India. In absolute terms, the Chinese agriculture sector grew 12 times while India’s grew just five times.

To close this gap in the future, the Indian economy will have to outperform China’s in a significant manner. Just to understand, it was assumed that the Indian economy grows from 2017 at 8 percent and the Chinese economy decelerates to just 5 percent by 2017. Even in such an unlikely scenario, India will have to wait until 2073 (another 58 years) to overtake the Chinese economy in current value terms.

There are two primary assumptions in this analysis. First, that the growth remains consistent at 8 percent for India while it remains 5 percent for China. The fact of the matter is that over time, growth rates tend to fall so it will become increasingly difficult for India and China to grow at these rates. It is the primary cause as to why industrialized nations see very little growth.

Second, there is no political disintegration within the two economies. Political reshaping can change and alter the dynamics of growth very quickly and is something that has not been factored in. Still, the graph offers a perspective to those who believe that India is likely to catch-up with the Chinese economy anytime soon. Rather than catching up with China, it is advisable that the Indian policymakers focus on lifting people out of poverty through growth and bettering the living standards of those residing in cities and towns. Also, a boost to manufacturing not just for exports but also for more choice within the domestic economy (as the RBI governor has pointed out recently) will help India immensely.

Published with Business Standard on June 2, 2015.