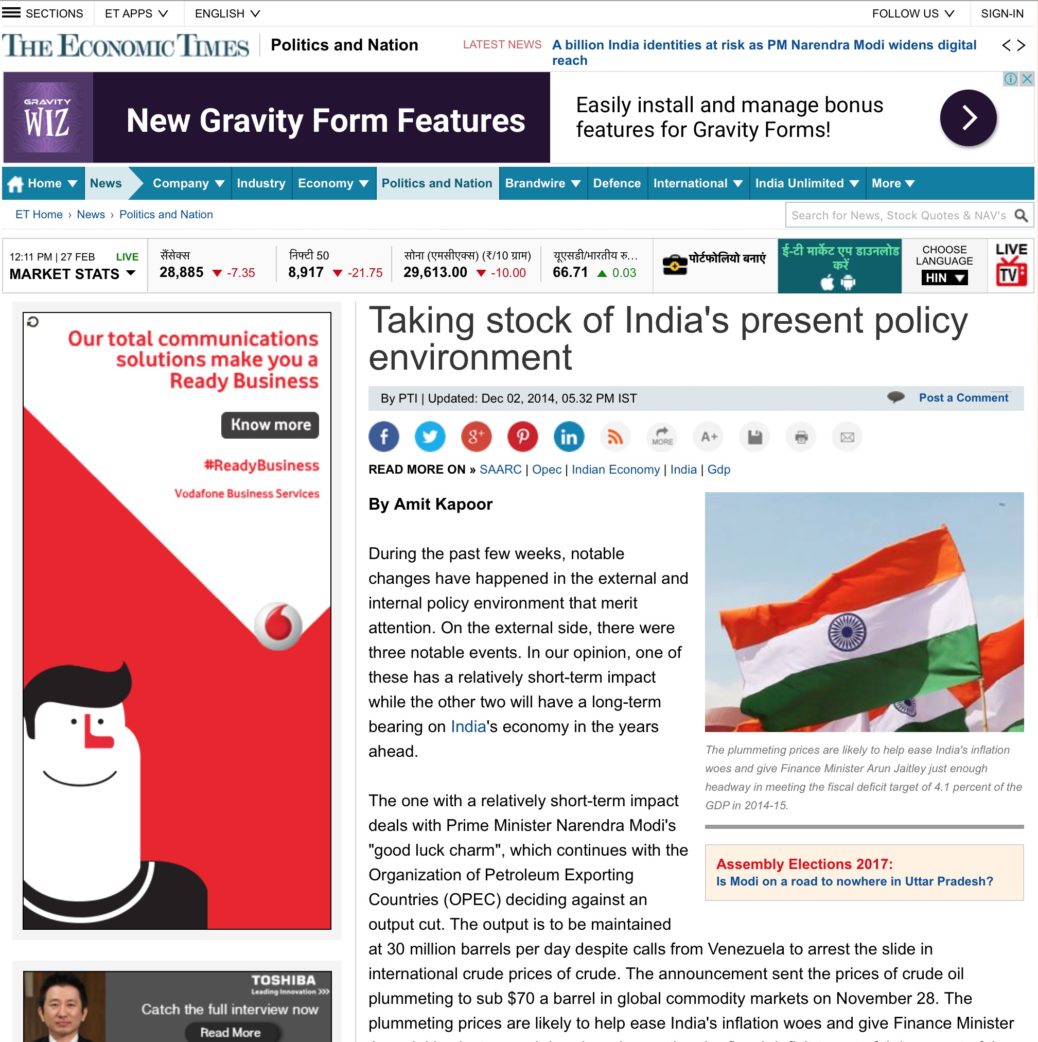 During the past few week notable changes have happened in the external and internal policy environment, which merit attention. On the external side, there were three notable events. In our opinion, one of these has a relatively short-term impact while the other two will have a long term bearing on India’s economy in the years’ ahead.

The one with a relatively short-term impact deals with PM Modi’s ‘good luck charm’, which continues with the Organization of the Petroleum Exporting Countries (OPEC) deciding against an output cut. The output is to be maintained at 30 million barrels per day as announced by OPEC despite calls from Venezuela to arrest the slide in the international prices of crude. The announcement sent the prices of crude oil plummeting to sub $70 a barrel in global commodity markets on November 28, 2014. The plummeting prices are likely to help ease India’s inflation woes and give its Finance Minister just enough headway in meeting the fiscal deficit target of 4.1% of the GDP in 2014-15. It would also give an added incentive to Governor Rajan to cut interest rates till the end of this fiscal year. The monetary policy review on December 2, 2014 will most probably not factor the developments of OPEC and is likely to see RBI keeping the interest rates (largely to stabilize the impact of the stopping of FED’s bond buying program) unchanged even though the industry and the FM have nudged RBI for a rate cut.

The second major development in our opinion in the past week on the external side has been the signing of the framework pact on electricity trade between the eight countries, which constitute the South Asian Association for Regional Cooperation (SAARC). The signing took place at the 18th SAARC summit held at Kathmandu in Nepal. The pact is seen as one of the three pacts that were to be signed during the two-day summit. The pact could lead to greater cooperation in the area of power sharing in the years ahead. The other two pacts—one permitting the movement of motor vehicles within the region and another allowing the movement of railways are slated to be sorted out in the coming three months. The transport ministers of SAARC countries are empowered to sort out any problems in the way of implementing these two specific pacts. The three pacts in SAARC together could have long-range implications for maintaining peace, security, and prosperity within the region.

The third major development externally was announcements by World Trade Organization (WTO) on the draft decisions regarding public stockholding for food security purposes and the Trade Facilitation Agreement. The deal now incorporates India’s stand that the interim solution on public stockholding for food security reached at Bali in the previous year will continue indefinitely. It is in contrast to the earlier mentioned limit of four years in case a permanent solution is not reached within the four-year period. The WTO expects the situation to be resolved and a likely solution by the end of 2015. The deal is seen as a first step to Trade Facilitation Agreement (TFA) that is expected to add approximately a trillion dollars to the global economy and create more than 20 million jobs. Taken together, these three external developments should be reason enough for India to feel elated.

On the internal policy front too there has been some activity with the passing of a bill a day in the current winter session of parliament that started on November 24th. The session is expected to have 22 sittings and is likely to see action on the 15 legislative bills currently pending in Parliament that are listed for consideration and passing. Apart from this the session is also expected to see action on 17 Bills are listed for introduction, consideration and passing and of which three will be taken up for consideration and passing during the session.  Both the Houses of Parliament during the first week passed two bills that included The Labour Laws Amendment Bill, 2011 and The Delhi Special Police Establishment Bill, 2014.

The Rajya Sabha alone passed, The Apprentices Act (Amendment) Bill, 2014. Other prominent bills which are listed for consideration and passing include The Insurance Laws (Amendment) Bill, 2008 which raises FDI limit to 49% and allows entry of foreign reinsurers and The Real Estate (Regulation and Development) BilI, 2013 that mandates the creation of a Real Estate Regulatory Authority to regulate the sector and seeks to establish the Appellate Tribunal to hear appeals from the decisions of the authority. Another important bill which is listed for introduction, consideration and passing is The Coal Mines (Special Provisions) Bill, 2014 which replaces an ordinance and provides the procedure for auction of coal blocks that were cancelled by the Honorable Supreme Court in September 2014.

Some of these bills could bring about significant changes in our existing internal policy framework. However, in the months ahead, it will be the finance minister’s taking stock of the external policy environment and unleashing the second-generation reforms internally through his Union Budget, that will lay the foundation for India’s future growth and competitiveness.

Published with Business Standard on December 2, 2014.