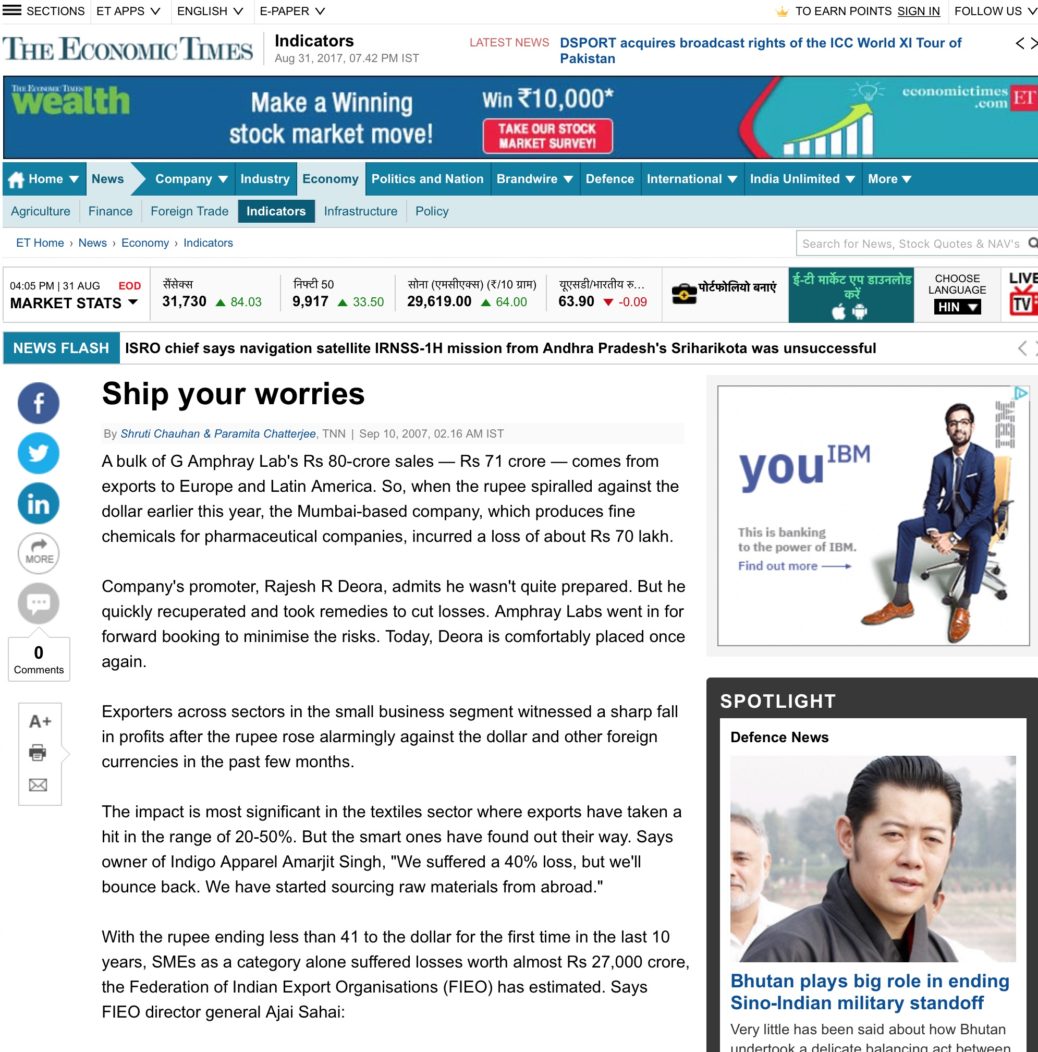 Dr. Amit Kapoor shared his views in the article titled “Ship Your Worries” published with Economic Times on September 10, 2007.

A bulk of G Amphray Lab’s Rs 80-crore sales — Rs 71 crore — comes from exports to Europe and Latin America. So, when the rupee spiralled against the dollar earlier this year, the Mumbai-based company, which produces fine chemicals for pharmaceutical companies, incurred a loss of about Rs 70 lakh.

Company’s promoter, Rajesh R Deora, admits he wasn’t quite prepared. But he quickly recuperated and took remedies to cut losses. Amphray Labs went in for forward booking to minimise the risks. Today, Deora is comfortably placed once again.

Exporters across sectors in the small business segment witnessed a sharp fall in profits after the rupee rose alarmingly against the dollar and other foreign currencies in the past few months.

The impact is most significant in the textiles sector where exports have taken a hit in the range of 20-50%. But the smart ones have found out their way. Says owner of Indigo Apparel Amarjit Singh, “We suffered a 40% loss, but we’ll bounce back. We have started sourcing raw materials from abroad.”

With the rupee ending less than 41 to the dollar for the first time in the last 10 years, SMEs as a category alone suffered losses worth almost Rs 27,000 crore, the Federation of Indian Export Organisations (FIEO) has estimated. Says FIEO director general Ajai Sahai:

“While large companies are cash-rich, smaller companies that operate on lower margins of 15% find it difficult to withstand exchange rate fluctuations.” Although there were signs that the rupee would appreciate, very few firms actually took those hints to eliminate risks, Mr Sahai adds.

While the challenges for SMEs are enormous at this point in time, there are measures that industry experts say will help SMEs mitigate risks. “With the world becoming a global village, we are exposed to risks that the rest of the economies are facing,” says Anil Bhardwaj, secretary general of the Federation of Indian Micro and Small & Medium Enterprises (FISME). He adds: “Traders should adopt measures to determine the risk exposure on time.”

All enterprises—both large and small—should calculate what percentage of their sales is in foreign currency and take note of the country where they are exporting. Based on exchange risk, SMEs should adopt hedging strategies.

Hanung Toys and Textiles Ltd exports soft toys to retailers in the US and Europe. Says the company’s chairman and managing director AK Bansal: “Exporters should keep up a long-term focus and hedge at least 50-60% of the total exposure.”

Consider this: If the SME is supposed to make a payment of $10,000 after three months then it can enter into a forward contract to purchase US dollar after three months at a price which is fixed today. Also, there are swaps and call and put options, which help mitigate risks.

As a general rule, the more an SME relies on its foreign exchange cash flow in its business, the more it should hedge against foreign exchange risk. “However, hedging is not necessary when an SME transacts only an insignificant part of its total business,” says Amit Kapoor, chief economist, Datamonitor.

Exporters in India could also look for alternative export destinations. “The main factor for the susceptibility of SMEs to the vagaries of fluctuating foreign exchange markets is its over-dependence on the US market,” says Kapoor, adding, “Indian companies should now focus on emerging markets like Australia for instance.”

Currency diversification is the key. SMEs can reduce exchange risk by accepting orders in other currencies such as the Euro and Yen, although the best way to eliminate risk is to ask clients to pay in the Indian rupee.

The loss incurred by SMEs is significant. “After all, it is a one of the most vibrant sectors in India today that constitutes 8% of the GDP growth,” says Mr Bhardwaj. With exporters suffering losses, several banks and financial companies have come forward to provide currency hedging products to Indian firms.

The government too has taken up several steps to compensate traders. One, it has directed banks to cut interest rates for exporters. Two, it is offering an interest grant of 2% to banks giving export sops to exporters. Also, it has asked the RBI for export sops for nine sectors, which include textiles, toys, leather and marine exports. The sops, applicable till December 2007, are expected to cost the government around Rs 800 crore. The relief package would be relooked in December depending on the movement of the rupee.

The rupee appreciation came at a time when the Indian industry is rather bullish, and many producers are trying to tap the global markets. “Thankfully it happened in the initial days of India Inc’s global pursuit. We now know what to do in the future,” says Sahai.