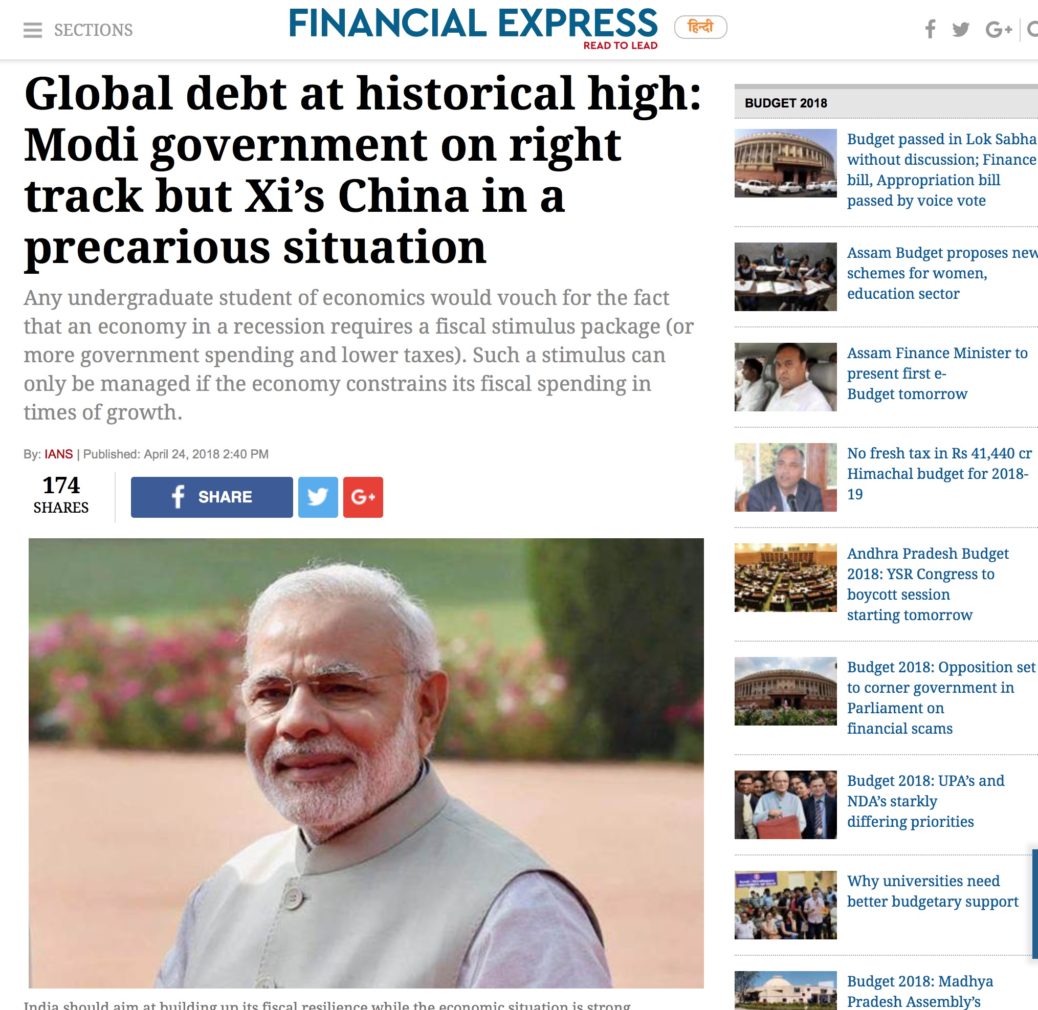 Any undergraduate student of economics would vouch for the fact that an economy in a recession requires a fiscal stimulus package (or more government spending and lower taxes). Such a stimulus can only be managed if the economy constrains its fiscal spending in times of growth. A restrain on spending in good times would allow the creation of a buffer for a strong fiscal policy response in the event of a downturn. This Keynesian prescription of countercyclical fiscal policy is expected to stabilise output of an economy over business cycle dynamics.

The world economy today, however, is on a problematic course. The International Monetary Fund pointed out last week that the global debt levels have reached historical highs. In 2016, the global debt stood at $164 trillion, which was equivalent to 225 percent of global GDP. The current levels of global debt-to-GDP ratio are a whole 12 percentage points higher than the previous peak of 2009 when the governments were on a deficit spending spree in the aftermath of the global financial crisis.

Also, it turns out that countries in all income groups have accumulated massive amounts of debt. In advanced countries, the debt-to-GDP ratios have hit levels not seen since World War II while the emerging markets and middle-income countries are at levels last seen during the 1980s debt crisis. The current debt situation has been a result of the prolonged after-effects of the 2008 financial crisis, which have only recently worn off. Excess liquidity is generated in a system when the economic growth rate is lower than the amount of money circulating in the economy. When banks have more money in their reserves than required, they resort to lending at lower interest rates. These low interest rates encourage higher borrowing by governments, individuals and corporates. Over the last few years, since the world was in a low-growth phase and interest rates were at rock bottom, debt was continually rising.

Meanwhile, the US economy, which had to resort a similar low-interest phase, is continuing to strain its fiscal situation. Despite having massive spending obligations in the form of entitlement programmes, the Trump administration opted for generous tax cuts with no commensurate revenue generating plan. The expansionary fiscal policy has come at a time when the US economy is at its strongest in a decade. The fiscal deficit is expected to reach $1 trillion soon.

China is in a more precarious situation. The country has moved from being a low-leverage country in 2007 to having a debt position that is currently worse than the US. In a bid to sustain its growth story, the Chinese government authorised a decade-long debt explosion. Even though most of its debt has been accumulated by the corporate sector, a large part of it has been incurred by state-owned enterprises backed by central and local governments. So, the state has played an enabling role in inculcating the behaviour of unrestrained borrowing.

Now that the world economy is finally on a cyclical upswing, the escalating debt addiction needs to come to an end and fiscal buffers should be strengthened to reduce the risk of financial difficulties in case global financial conditions tighten suddenly. The necessity of winding down debt levels right away has been shown in a paper published last year by David Romer and Christina Romer. After analysing 24 economies, the two economists convincingly showed that if a country has both fiscal and monetary space in time of a crisis, the economy’s output contracted by less than 1 percent. However, if that was not the case, the output declines by about 10 percent. Therefore, it is absolutely vital that the world economies begin to work towards enhancing their resilience.

Against this backdrop, the focus of the Indian government on the practice of fiscal restraint seems to be on the right track. The N.K. Singh Committee had recommended a combined debt-to-GDP ratio of 60 percent by 2022-23 and the IMF estimates that India will definitely miss the target but be close to achieving its target by then. The only cause of concern is the deteriorating condition of state finances. The Fourteenth Finance Commission had recommended anchoring the fiscal deficit of the states to 3 percent of the GSDP between 2015-16 and 2019-20. However, the states have not been able to achieve the target till date. It is not concerning to breach the targets if borrowing is undertaken to fund productive activities like improving infrastructure. But, Indian states are neck deep in debt only due to pandering of populist sentiments of the masses. If the government efforts to synchronise general and state elections materialise, the fiscal deficit will take an even further hit. It would be in the best interest of the economy if such short-term political temptations are avoided. India should aim at building up its fiscal resilience while the economic situation is strong.