We Create A Much Broader Network, Beyond Even Facebook 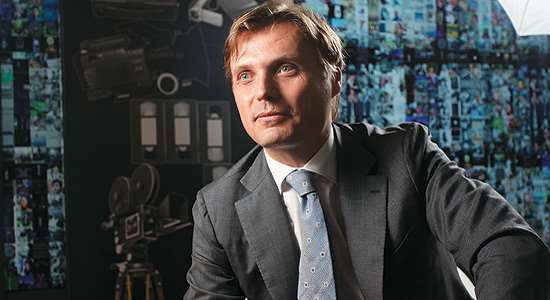 If I ask you to define Ericsson’s industry, how would you do it?

We are in the business of providing and driving telecom services and empowering society, business and people. We have spent the last 100 years connecting places. In the last 20 years we connected people and in the next 10-20 years we will connect devices. Our vision is to connect 50 billion devices by 2020. That shows the transformation this industry has gone through. We took 70-80 years to connect places, while connecting people took about 20-30 years; now, connecting devices is expected to take just 10-20 years. So the speed of the growth is significant, and that’s the basic development of our industry.

In India, there are some major shifts in the way we are doing things. In the mid-1990s, person-to-person communication took off due to the 2G rollouts. And with 3G we’re likely to see data growth and its impact on today’s subscribers is more profound because it is empowering them beyond voice communication. What happened in Europe is now happening in India.

Is there a promising growth story unfolding in India?

Yes, that’s what we expect. 3G technology is a very recent phenomenon in India vis-à-vis 2G that has been here since the mid-1990s. Yet, we have integrated thousands of 3G stations in the last six months. What took about eight to 10 years to pick up in Europe is going to happen faster here, ie 3G is going to catch on really fast here. This will be a significant uptake in India and in the rest of the emerging markets as well because costs are going to be tamed.

You said that you’re going to connect 50 billion devices. What kind of devices are they going to be?

To put it broadly, it could be any device that benefits by being connected. It could be a car or even an AC. In the case of ACs or similar appliances, you could have a way of controlling them.

Our vision is to connect 50 billion devices by 2020. That shows the transformation this industry has gone through.

This has a huge effect on integrated urban mobility. What role do you see Ericsson playing in this?

There are a couple of points here. I think if we can predict the future well and play the role of an enabler, it would be a great achievement. A lot of players who have been successful earlier may not be that successful in the next phase.

Ericsson has to evolve from being a telecom equipment provider to an information communication and telecom (ICT) company because otherwise we may not be relevant in the new context. We have to position ourselves from both the product and the service perspective. People perceive us as a telecom equipment provider (which we are very proud of being), but if we want to evolve into a more distributed network scenario then we need to play with different aces. We need to have a lot of system integrator (SI) competence and people competence, and continually develop networks.

If devices are going to get connected then that will impact markets across industries. How do you think consumers will change? Will people like you and me be affected?

By the 50-billion [devices] connection structure, I think a lot of things will happen. If you look at the application space then you’re suddenly much more in control of what you can do. Before you make a phone call you can actually get work done, sort information and retrieve data instantly. Now you can actually control your environment more through these devices. And we create a much broader network environment beyond, say, even social networking sites like Facebook!

We’ve seen that there is a failure of the social media right now. MySpace lost close to 100 million customers in the last six months. Facebook is also getting impacted. How do you see these shifts?

It is interesting to see how the social media landscape is changing. We all know people need to socialise and network. But who would have predicted Facebook five years back or Apple’s iPad for that matter? Who would have predicted that Nokia would face a downturn? So it’s very difficult to make any predictions as to who’s going to be the winner.

Those who left MySpace might have just changed means by switching to Twitter or Google+. They might be going somewhere else but the medium remains the same. So, I think people are less brand-conscious today as the exit barriers are absolutely negligible for the consumer.

In the past, networks drove the success of your industry. How do you think the networks will change now?

At the end of the day, the person who understands the end-consumer and what he is willing to pay wins. But I feel that the link between network capacity and revenue has been overplayed. Marginal revenue might slip but not the role of the network. Parallel to this, people have also started to select the network with the best quality. So, the right manoeuvre is to differentiate yourself so that you can deliver quality to the customer.

How has the consumer changed in the last 10 years?

The consumer has totally changed. From having a single mobile device to using multiple gizmos to using smartphones, the change has been exhaustive and overwhelming. Today, the consumer has the Internet on the mobile and has accessibility to information on one single device. This was not even thought of 10 years ago.

Considering the B2C, or business-to-consumer approach, how is the consumer getting influenced?

Our business is wholly driven by the magnitude of influence we exercise on our end user—whether it is governments, individuals or companies. We have a consumer lab in India that assesses and analyses consumer behaviour. It analyses the usage pattern people follow for smartphones and at what time of the day and how people use smartphones. By understanding these and other matters, we not only evaluate consumers but are also in a position to suggest applications or devices to operators that will be in demand with consumers.

Who are your competitors?

There are several at several points in the value chain. Anybody from an SI company to a Nokia Siemens, an Alcatel Lucent and a Huawei can be a competitor. But it could also be an IBM or an Infosys.

What’s the unique value proposition for your consumer?

Our competitive leadership as a company is linked to technological leadership. We spend around $3-4 billion a year on R&D in order to have a competitive edge. From a service perspective, we differentiate ourselves with the people we have. We have over 90,000 people. So in spite of the fact that ours is a B2B company our presence translates into extreme value for the consumers.

I think people are less brand-conscious today as the exit barriers are absolutely negligible for the consumer.

You formed a joint venture with Sony. Do you think it was a smart move?

Yes. We have a 50-50 joint venture—with us handling the network and Sony the content and consumers. And we both had a device background.

Have you consciously decided against doing anything?

Certainly. We made a lot of technology choices. We concentrated on future technologies and avoided others. A few years back (early-2000) we sold off the CDMA business and instead we diverted our R&D efforts to global system for mobile communications or GSM. We have also chosen not to participate in Wimax.

What are the parameters that have made you decide on these actions?

We see gain in scale and volume in whatever technologies we choose. For example, CDMA was limited to the US markets and didn’t have the same growth story as GSM in other parts of the world. So it has to do with the goal, the standardisation and cost advantage.

Are you now a platform for dissemination of information?

Yes, this would be a part of the business. But the larger part aims at collecting it and making sure that it gets used properly. Additionally, it has to be ensured that the equipment platform gets capitalised to operate in the most optimal way.

As an active creator what are the unique accessories you have created that have given you a competitive advantage?

We have created a strong R&D base with a lot of innovation culture around it that is hard to replicate.

What is leadership in your view?

A good leader motivates people and motivated people are productive.

Evolution Of The Industry

The Strat Speak interaction was published with Outlook Business on September 17, 2011.