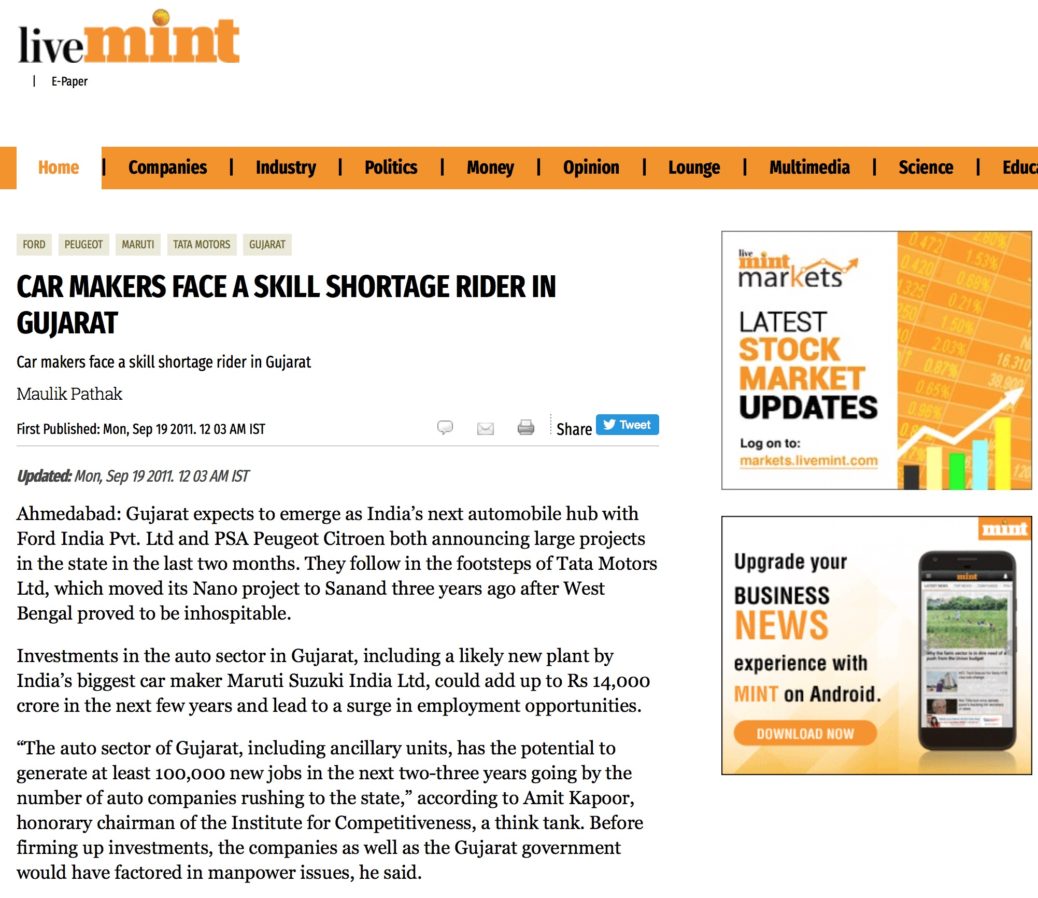 Dr. Amit Kapoor shared his views on competitiveness of Gujarat in an article titled “Car Makers Face a Skill Shortage Rider in Gujarat” published with Mint on September 19, 2011.

Ahmedabad: Gujarat expects to emerge as India’s next automobile hub with Ford India Pvt. Ltd and PSA Peugeot Citroen both announcing large projects in the state in the last two months. They follow in the footsteps of Tata Motors Ltd, which moved its Nano project to Sanand three years ago after West Bengal proved to be inhospitable.

Investments in the auto sector in Gujarat, including a likely new plant by India’s biggest car maker Maruti Suzuki India Ltd, could add up to Rs. 14,000 crore in the next few years and lead to a surge in employment opportunities.

“The auto sector of Gujarat, including ancillary units, has the potential to generate at least 100,000 new jobs in the next two-three years going by the number of auto companies rushing to the state,” according to Amit Kapoor, honorary chairman of the Institute for Competitiveness, a think tank. Before firming up investments, the companies as well as the Gujarat government would have factored in manpower issues, he said.

Companies that have approached the state for setting up plants include Bajaj Auto Ltd and Hero Moto Corp.Mint reported earlier this month on Hero Moto’s plans to set up its fourth unit in Gujarat. The Business Standard quoted Rajiv Bajaj, managing director of Bajaj Auto, as saying in a 20 July report that the two-wheeler manufacturer planned to set up its fourth unit in Gujarat’s Mundra area. The plant will also manufacture a passenger car the company is developing with Renault-Nissan, the report said.

Last week, Honda Motor Co. Ltd and Toyota Motor Corp. held preliminary talks with Gujarat on setting up plants, said a state government official familiar with the development, asking not to be named. Among other industries, Hindustan Aeronautics Ltd is also considering a project at Sanand. Mint could not independently verify the status of these projects.

Finding enough people to fill the prospective job openings is something that preoccupies the companies, since industries availing of government benefits—which constitute the incentives that encourage companies to choose the state—need to make sure that 80% of the workforce is made up of people from Gujarat.

An official of a company that has set up a special economic zone in Gujarat said the challenge is to find workers who have been domiciled in Gujarat for 15 years.

“The availability of skilled manpower is surely a matter of prime concern for us,” said Michael Boneham, president and managing director of Ford India Pvt. Ltd. “We still have three years before we can start production at our plant and we hope to resolve this issue with the support of the state government by then.”

Both Ford and Peugeot officials have said they are working with the state government on setting up skill development centres through the public-private participation (PPP) model and working closely with Industrial Training Institutes (ITIs). An email sent to a Peugeot official remained unanswered.

While the manpower requirement will depend on the level of automation and plant design, the state employment policy is playing a role in strategy.

“All the best people have been absorbed by the Tatas and Bosch Rexroth India Ltd at Sanand,” said an official of an auto company evaluating the state for investment. “We will gather data of the available workforce and make a presentation to the state government at an appropriate time in future. We respect the law of the land. We have been assured all necessary support by the state and we will approach the government to help us whenever the need arises.” Bosch is in the process of setting up a new hydraulics plant at Sanand.

Peugeot and Ford, with an investment commitment of Rs. 4,000 crore each, have also been allotted land in the same 2,200-acre industrial area at Sanand that is home to the Nano project.

Peugeot has expressed its interest in investing Rs. 250 crore to set up a skill development and research and development centre at Sanand, a senior government official has said. The company said recently that the new facility could generate as many as 4,000 jobs. Ford aims to employ about 5,000 at Sanand, he said. Mint wasn’t able to independently verify this.

Of their total 900 employees at Sanand, Tata has hired 800 local residents from the ITIs and through a training programme, another government official said. Other companies could also follow suit.

The next auto entrants into Gujarat are proposing larger plants with more workers than the Nano factory, said the company official cited above. He added that the ratio of skilled to unskilled manpower would be 60:40.

Maruti, which is looking at locations in north Gujarat for its new unit, hasn’t yet decided on the project although Reuters reported 14 September that it will likely build a $1.3 billion passenger car factory in the state, citing Japan’s Kyodonews agency. The move will gather urgency as Maruti seeks to cope with a strike at its plants in Gurgaon and Manesar, both in Haryana.

“Assuming we do go to Gujarat, we will train people for the facility,” said R.C. Bhargava, chairman of Maruti. “The state has training facilities.”

With state elections scheduled next year, the government isn’t likely to amend the stipulation on local employment, an industry expert said on condition of anonymity.