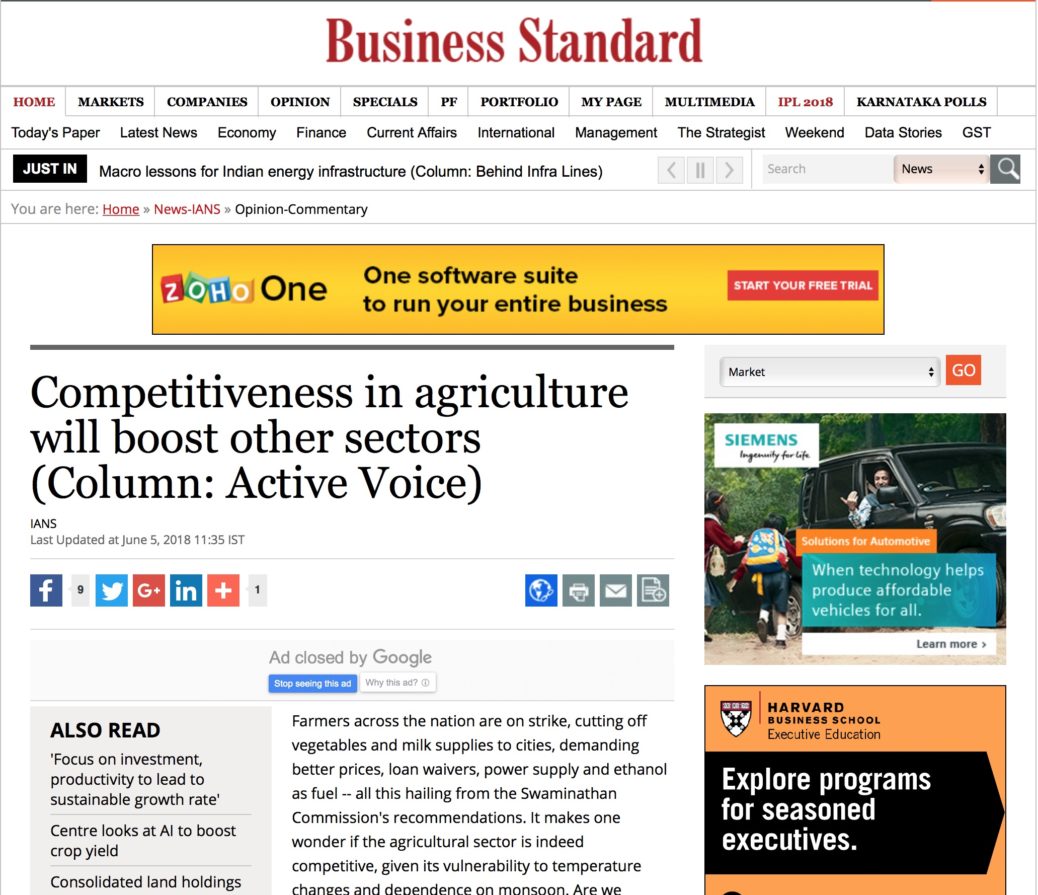 The farmers across the nation are on a 10-day strike, cutting off the cities of vegetables and milk, with a demand for better prices, loan waiver, power supply and ethanol as fuel, hailing from the Swaminathan Commission’s Recommendations. It makes one wonder if the agricultural sector is indeed competitive, given its vulnerability to temperature changes and dependence on monsoon. Are we forgetting the agriculture sector and allied activities in the name of progress?

Agriculture contributes 17.4 % to GDP and employs 54.6% of population. However, the contribution of agriculture to gross valued added has been declining since 2014. Recent estimates show that agriculture is expected to grow by 2.1 percent in the fiscal year 2017-18, which shows that the wheels are in motion and the hope is that the competitiveness of the agriculture sector itself will reach sky-high. However, the cause of concern remains that the benefits have not reached the farmers, yet. Therefore, the question remains as to how long the policies will take to reach those farmers.

Of course, in the traditional economic theory, a nation must undergo a structural transformation, moving away from agriculture and towards industry and services. However, since more than half of the population is still involved in the sector, there is a need to focus on tackling its competitiveness!

So, what will turn Agriculture and allied activities into a competitiveness miracle? The answer lies in productivity. The agricultural productivity showed a substantial rise in productivity from 2004-05 to 2014-15, where the output per hectare rose from 9.1. to 12. But, the advanced estimated for 2015-16 have shown a decline to 11.9 output per hectare, indicative of a creeping sluggishness in the agriculture sector. Caution must be taken to understand that a push towards productivity will push the quantum of the produce for farmers, so even the reduction in prices would be more than compensated for farmers.

How productive can India’s agriculture sector be? In this regard, there is a lot to be learn from Netherlands, who are the second largest global exporter of food with farm productivity has crossing leaps and bounds, as Netherlands’ farm productivity in 2015 was five times of that in 1950s.

But, how? For one, the sector would need the right kind of physical infrastructure, financial infrastructure, improved communication, innovation within the sector, focusing on administration, and most importantly, ensuring development of the human capital. On that note, we see that Agriculture is not totally forgotten, in terms of the infrastructure, especially power supply, human power availability in agriculture increased from about 0.043KW/ ha in 1960-61 to about 0.077 KW/ ha in 2014-15, and the mechanical and electrical sources of power have increased from 7% to about 90% from 1960-61 to 2014-15. To sustain innovation, the R&D expenditure in the agriculture sector has been increasing at a compounded rate of interest of 4.2%.

To ensure the doubling of income of farmers by 2022, the government has made a large amount of efforts in investing in science and technology for farming activities, where the term ‘Digital Agriculture’ has been coined to emphasize on the importance of digitization, followed by throwing light on the use of electronic devices, tools and a fusion of digitized systems, to enhance its’s productivity and thus pushing the farmer’s income. A step to ensure equitable regional penetration has been taken via a scheme of bringing green revolution to Eastern Indian to address the concerns of low rice-productivity, complemented by initiatives such as soil health card, per drop more crop in Pradhan Mantri Krishi Sinchai Yojana (PMKSY), to ensure the same.

But, lets not forget the issues still exist across farmers in the nation, therefore, it is necessary to ensure the competitiveness of the farmers. Therefore, the sector needs a smoothness in the functioning and an ‘ease of doing farming activities’, much like the ease of doing business index. This is inclusive of creating an enabling environment via provision of the above mention factors with least amount of hassles. Apart from boosting overall productivity of the sector, this can be taken care of from a commodity-based organizations, minimum support price, with an authority that focuses on marketing, storage and processing of the goods, as the Swaminathan Recommendations’ suggest.

To tackle these concerns, the government has taken up Price Stabilization Fund (PSF) to control the prices and the volatility of agricultural products, tackling concerns of inflation. The government has also launched an e-platform called ‘e-NAM’ i.e. an electronic agricultural market to ensure farmers benefit from remunerative prices for their produce in the market.

Given the policies in action, holistically speaking, there is a need to speed-up a little to ensure that the agriculture and its allied activities show increased productivity, with the hope that a competitiveness boost in agriculture will boost the other sectors, hopefully nurturing food processing clusters and therefore, make India triumphant in competitiveness.  The hope is the policies will work in a way that agricultural productivity shoots up, and the farmers are able to benefit from it.

The article was published with Business Standard, Money Life, Millennium Post on June 6, 2018.