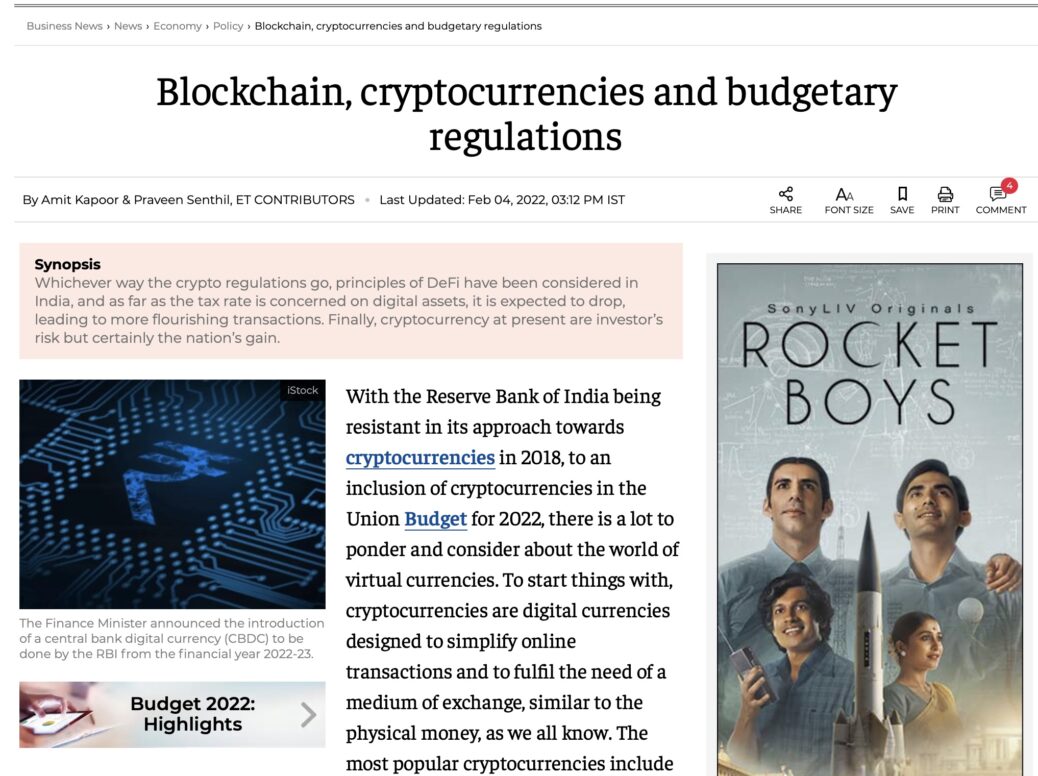 Whichever way the crypto regulations go, principles of DeFi have been considered in India, and as far as the tax rate is concerned on digital assets, it is expected to drop, leading to more flourishing transactions. Finally, cryptocurrency at present are investor’s risk but certainly the nation’s gain

With the Reserve Bank of India being resistant in its approach towards cryptocurrencies in 2018, to an inclusion of cryptocurrencies in the Union Budget for 2022, there is a lot to ponder and consider about the world of virtual currencies. To start things with, cryptocurrencies are digital currencies designed to simplify online transactions and to fulfil the need of a medium of exchange, similar to the physical money, as we all know. The most popular cryptocurrencies include Bitcoin (BTC) and Ethereum (ETH). While Bitcoin blockchain was invented to traditionally transact bitcoins along the network, Ethereum is a blockchain platform which facilitates the use of smart contracts, which can be thought of as digitally enforced business agreements.

In other words, cryptocurrencies are a practical implementation of a versatile and smart tool named blockchain. Blockchain is a system of shared pool of data (open to all participants), wherein each packet or block of data is uniquely chained with other blocks, creating an immutable network of transactions. The technology of blockchain offers some key benefits for the development of the current financial system; firstly, it maintains a record of transactions (or any data being passed onto a blockchain network). This not only helps trace the path taken by a commodity through concerned parties with high transparency, but also creates an irreversible chain of unique blocks, resulting in secure economic exchanges. Secondly, a blockchain system encrypts goods with unique fingerprints(called keys), which further helps in procuring only genuine goods, and results in reducing the losses from counterfeit goods. Thirdly, the transactions taking place in a blockchain are irreversible and immutable, which means two things: (a) any payment once done, cannot be reversed and can only be returned with another transaction, which too, is recorded and (b) any data, once entered into a blockchain cannot be altered, making it a secure platform to process payments.

Through the positives of blockchain, we’ve looked at a mainstream subject for a decentralised financial system that can transform our perception about payments. Decentralised finance (or DeFi) is a simplified financial system which eliminates the majority of time consumed by the intermediaries, leading to faster transactions. DeFi, through its introduction, can generate breakthroughs in the financial system through solving inefficiencies and bringing in new tools in the form of blockchain and smart contracts. It uses blockchain to create a platform wherein users can perform almost any economic exchange from trading cryptocurrencies to borrow/lend credit without much of the usual hassle often caused by intermediary. The absence of a mediator in DeFi makes it a much better alternative to the present banking system. DeFi also celebrates the notion of smart contracts, seen in Ethereum. Smart contracts also strengthen the ideology of transparency, which already exists in a blockchain; the open nature of blockchain allows all parties to parse through the terms concerned with a particular transaction or any other agreement, forming a safe and legal environment for contracts to exist. Furthermore, the extensive workability that smart contract offers (its ability to include any condition for the ignition of transactions) increases DeFi’s overall efficiency as a financial system. Another successful application of DeFi and blockchain is present in the form of NFTs (Non Fungible Tokens), which are digital tokens which can be exchanged within the network. NFTs, these days are in great demand; some digital arts and drawings sell up to millions of dollars and their worth just keeps on increasing (well, mostly). These assets are valued so high due to their originality and their ability of not being duplicable, which is what matters in today’s digital age. Buying NFTs today is similar to owning a one-of-a-kind artwork such as the Mona Lisa or The Starry Nights.  Just look at the Nyan Cat, for instance, it is just a GIF of a pixelated cat with a rainbow trail gliding through space, and is worth about $600,000. Another NFT, the CryptoPunk #3100 was sold for more than $7,500,00, illustrating the endless capabilities of DeFi.

Digital Rupee and the Budget Regulations

Finance Minister wisely announced the introduction of a central bank digital currency (CBDC) to be done by the RBI from the financial year 2022-23. The move will not only reduce costs related to currency management, but can also propel India into a much better position in the digital space. It will also make India one of the very few countries to implement CBDCs, and to have its own centralised digital currency. The introduction of digital rupee can also fulfil various DeFi principles and can help achieve faster economic growth. It is also said to make use of blockchain and other technologies to accomplish what could possibly be a valuable addition to the present financial system.

Another inclusion came in the form of taxing the income from crypto and other digital assets (including NFTs). Albeit the high tax rate of 30% (highest tax rate on any commodity) on income from assets, investors and marketers are satisfied for the much needed clarity being provided about cryptocurrencies and their classification as a new asset class. A rare case when industrialists are happy with such a tax rate. The budget also points out a provision of a 1% tax deducted from source (TDS). Also, the introduction of a tax bracket does not mean absolute legalisation of crypto transactions, it is still a matter of thought for the government along with the RBI yet to take a decision to legalise crypto payments, but simultaneously the decision also shows that blockchain and DeFi are key instruments in this digital age, and banning it is not advisable.

Whichever way the crypto regulations go, principles of DeFi have been considered in India, and as far as the tax rate is concerned on digital assets, it is expected drop, leading to more flourishing transactions. Finally, cryptocurrency at present are investor’s risk but certainly Nation’s gain!

The article was published with Economic Times on February 4, 2022