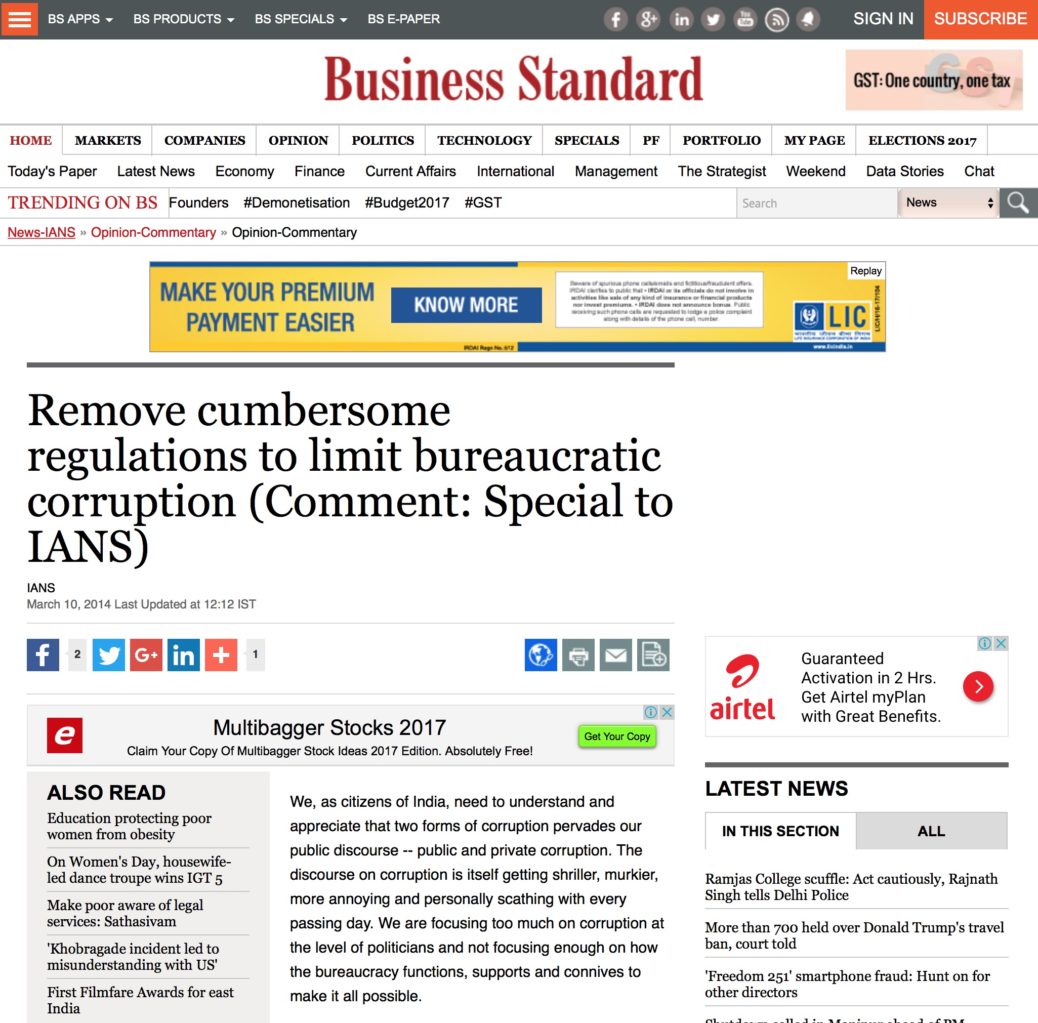 We as citizens of the country need to understand and appreciate that two forms of corruption pervades our public discourse i.e., public and private corruption. The discourse though on corruption is getting shriller, murkier, annoying and personally scathing every passing day in the country. We are focusing too much on corruption at the level of politicians and not focusing enough on how the bureaucracy functions, supports and connives to make it all possible.

Public corruption is the illicit state of political influence (sale of political influence, political extortion, industry capture, strategic investment decisions etc.) whereas private corruption arises when the either the private player curtails competition (thus compromising on consumer interests) or when there is a case of industry capture when regulators get too close to the industry promoting the interest of the industry at the expense of broader societal interests.

Public corruption in India arises due to high level of governmental or bureaucratic intervention in the country. The complete authority that the bureaucracy has over the tasks ordained to be completed and executed by the government gives it powers that are absolutely gargantuan and liable to misuse. The adage “power corrupts and absolute power corrupts absolutely” fits exceptionally well. The absolute corruption that we see within bureaucracy is reflected in their attitude towards learning, limited perspective, narrow views, inability to think, unwilling to appreciate a different perspective, causing grievous harm to individuals who could disagree etc.

We cannot find a single sector or aspect of our lives in the country wherein the influence and illogical intervention is not the norm. The lesser said the better as the executing agency for the interventions is the bureaucracy. Today I believe the bureaucracy is using public discourse to take away the attention from them and even formulating foreign policy (remember Devyani Khobragade case), which is absolutely dangerous, and effectively showing the breakdown of democratic institutions.

Corruption is a stark manifestation of the rent seeking behavior of the government officials, the bureaucracy and the private sector. The fight today in the country is between social welfare and pursuing own self-interest. The self-interest of the politician is to get re-elected and would perform keeping their political agendas in mind. The bureaucrat would have no reasons to fear the law, perform, be reasoned and maybe well meaning as he cannot be reprimanded or even fired for his misdeeds. I would see more effect of non performance of bureaucracy (which is a form of individual corruption) or performance that only keeps in mind the protection of their individual bastions as the gravest danger to the country. The adverse effects of corruption are already visible in the country like lower acceptance of established institutions, deficient counter systems etc. This couldn’t have happened without the explicit support of bureaucracy and not only the politicians we tend to blame.

Corruption is a complex phenomenon that affects the quality of institutions within the country. Corruption is like an arbitrary tax, a complex social behavior, which occurs due to a need for speeding upon procedures. Bureaucratic Corruption simply put is the biggest obstacle in economic & social development as it undermines development by destroying the ‘rule of laws’ & weakening institutional foundations of a country.

The best solution to cut corruption is to reduce intervention possibilities by government and bureaucracy. Corruption without a doubt can be looked as a resource allocation problem in most of the developing world, which is executed by its bureaucracy. The Government should ideally as the first step remove cumbersome regulations that increase opportunities for public official to interact with individuals, businesses and give summary control on resources. This would be one significant step for India to recover lost ground in its march towards becoming a productive and a competitive nation. I hope we take some quick steps towards redefining the bureaucracy (the remnant of the Raj) who have clearly massacred the nation, the country’s thoughts, ethos, its functioning et al and are in continuous endeavor to make the citizenry subservient to its wishes.

Lest not forget what Mahatma Gandhi has said that we are not simply interested in exchanging rule by white sahibs for rule by brown sahibs. Unfortunately this is exactly what has happened within the country. What we need is a revolution to get us free from the clutches of bureaucracy rather than anything else.

Published with Business Standard on March 10, 2014